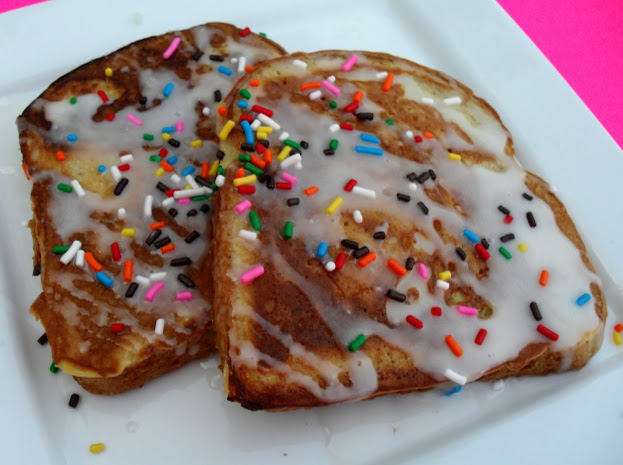 Remember the “Cake Batter Everything” craze that swept over the food blog world in 2011? Yeah, I hopped on that and enjoyed it to the fullest.  I shared only one of my cake batter explorations with you, the Cake Batter Crispy Treats, which were my favorite cake batter flavored treat, but do you think I let the remainder of my bag of yellow cake mix go to waste? No way, Jose.

Here’s a few ideas if you need some ways to use up extra cake mix. 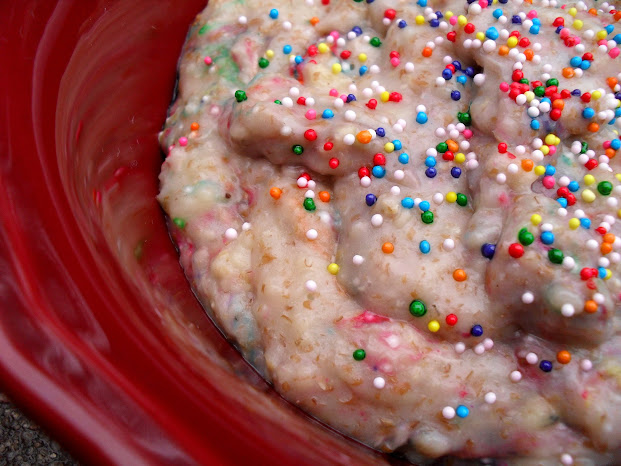 Cake Batter Oats. This is actually a pretty healthy recipe, considering there’s cake mix in it. And tasty too! 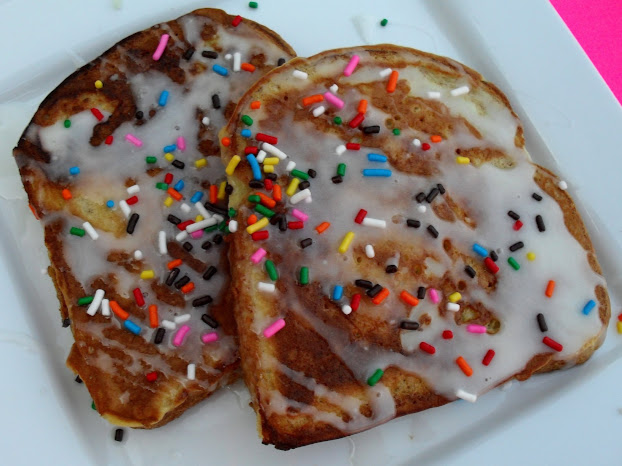 Cake Batter French Toast. What can I say, cake batter is such a great way to start the day. And sprinkles just make everything so happy.  This one would be fun for a birthday breakfast! I made a simple icing glaze by mixing like 1/4 cup powdered sugar with just enough milk to get it a drizzling consistency. 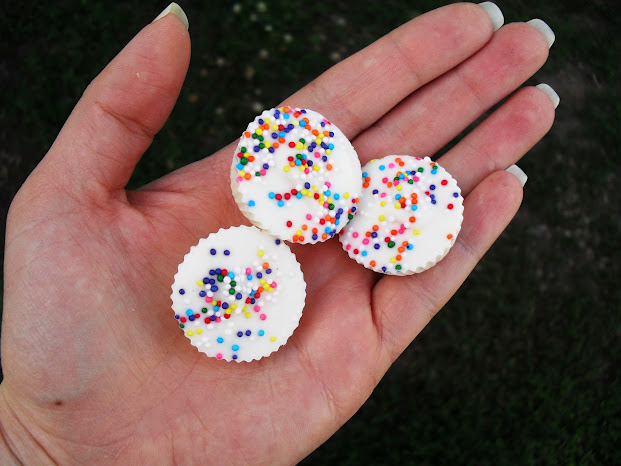 Cake Batter Candies. For these, I just melted some vanilla almond bark and added enough yellow cake mix to make it taste like cake batter, but not so much it got too thick.  I poured most of it in a chocolate bar mold (like the one I used for this Vegan White Chocolate), but I didn’t get a picture of that before I gave it to a friend as part of a thank you gift for turning a stain on my jeans into a work of art. The rest of it I poured into peanut butter cup molds and put sprinkles over the tops while it was still setting up.  Kids went crazy for these at a get together, even more so than my Cupcake Bites!

Have you made any cake batter flavored yums?

I have a confession to make.  I didn’t use vegan white chocolate on my Cinnabon Caramel Corn, despite my recipe calling for it.  It was my practice batch and since I was making it with things I had on hand, I used regular white baking chips.  I assumed finding vegan white chocolate would be simple and I could go out and buy it when it was time to make the real batch to ship to the winner.  Well, a friend of mine asked me where I got my vegan white chocolate because she had not been able to find any in Wichita so I called all the health food stores and none of them sold it.  I was shocked!  Apparently this stuff is harder to find than I assumed.

Measure the powdered sugar, soy milk powder, and salt into a sifter and sift into a bowl; set aside. Measure the cocoa butter into a large microwave-safe bowl and microwave for one minute; stir. Continue microwaving in 30-second intervals, stirring very well in between, until the cocoa butter is melted. If using the vanilla bean, scrape the seeds from the pod and whisk into the melted cocoa butter. Next, quickly whisk the dry ingredients into the cocoa butter until completely smooth. Pour into a chocolate mold (I used an 8-ounce candy bar mold).  If you don’t have a mold, paper cups or silicon bakeware will do in a pinch.  Gently tap the mold on the counter top a few times to release any excess air bubbles.  Allow to sit at room temperature for half an hour before placing in refrigerator to fully harden.  Pop the chocolate out of the mold and enjoy.  Store any leftovers (yeah, right!) in an airtight container.

Veronica’s notes: I read many first-hand reports of vanilla extract causing homemade white chocolate to curdle and become a vile consistency, so I chose to play it safe with vanilla bean seeds instead.  If you would like to try using extract or vanilla bean paste, consider yourself warned.  And please let me know if you try it and have success! UPDATE: I have now tried adding vanilla extract and have confirmed that it does indeed ruin the texture. Please do not try it.

I suppose I could get in trouble for putting a trademarked name into the title of this popcorn, but the truth is I’m just way too unimportant for Cinnabon to care what I do with their name.  And if they tasted this popcorn, they’d probably consider it a compliment that their name had been ascribed to this tasty treat.

Does it taste like a Cinnabon?  I have no idea.  I think it does, but I’ve only had 1/4 of a single Cinnabon in my entire life, and that was four years ago and as far as I recall, it did not have pecans in it.  I do know, however, that it reminds me of a cinnamon roll and it is crazy delicious and I just really like calling it Cinnabon Caramel Corn (versus the official name: “Cinnamon Caramel Corn with Pecans and White Chocolate”–way too many syllables to pronounce when I could be stuffing my face with popcorn exactly eight syllables earlier.).

This would make a great food gift this holiday season and stays fresh in an airtight container for at least a week (based on reports from recievers of portions that were mailed).  Ours did not survive more than an hour after it had cooled.

Cinnabon Caramel Corn
Recipe by Our Best Bites
(My notes are in parentheses. (I like parentheses.))

*You can use air popped or microwave popcorn. If using microwave, anything works, but I prefer a “natural” flavor that’s low in butter and salt.

Place popcorn and chopped pecans in a large bowl and set aside. (I personally divided the popcorn & nuts between two ginormous bowls, which I would recommend so you have room for lots of stirring.)

Combine brown sugar and cinnamon in a 2 liter capacity microwave safe bowl. Mix well. Chop butter into chunks and place on top of sugar mixture. Pour corn syrup over the top of everything. Microwave on high for 30 seconds and then stir to combine. Return to microwave and heat for 2 minutes. Remove and stir and then microwave for 2 minutes more.

Remove from microwave and add in vanilla and baking soda. Stir to combine. Mixture will foam and rise. Pour caramel mixture over popcorn and pecans and stir very well so everything is well coated.

Spread popcorn mixture onto a foil-lined jelly roll pan. (I had to use a jelly roll pan & a 9×13 pan–I think 2 jelly roll pans would be best.) Place in oven and bake for 30 minutes, stirring every 10 minutes. (I thought the popcorn wasn’t quite crisp enough after it cooled and will try baking it 10-20 minutes longer next time. I usually bake caramel corn for an hour and found it odd this one only called for half the time.)

Remove from oven and spread out on a large piece of parchment, waxed paper, or foil.

Melt almond bark according to package instructions. Drizzle over popcorn mixture. (I dipped a fork in it and swirled it all over.) When almond bark is hardened and popcorn is cool, break into chunks and enjoy!

It was a race against time to use up the remainder of my buttermilk and I went nutso yesterday (exactly one week AFTER the stuff was supposed to have expired), searching for recipes calling for buttermilk…and I have saved up a surprising number of them, considering how rarely I have it on hand.

I chose three, and I’m happy to report that ALL of the buttermilk got used up before I had to dump it down the drain. I’m one of those annoying can’t-waste -anything-edible people.  I will bring in burnt cookies to work b/c the thought of trashing them nearly sends me into an epileptic fit.

Anyway, I made a batch of Buttermilk Dressing (a wonderful dressing that’s low-cal without even trying to be), some Southern Style Oven Fried Chicken and some Zesty Lemon Pound Cakes, which just so happens to be one of my all time favorite spring-time treats.

You can tell from the texture of the batter that the cakes are going to be amazing.  It is thick, velvety and almost airy despite its density.  The cakes themselves…heavenly.  Zesty, sweet, tart, rich, and just like the batter–they’re dense and airy at the same time.  You can make them in little bundt pans or just bake it in a couple loaf pans–either way it will be wonderful.

Combine flour, baking powder and salt in a small bowl.  Beat butter, sugar and vanilla extract in large bowl until creamy.  Beat in eggs, one at a time, beating well after each addition.  Beat in lemon peel and white chocolate.  Gradually beat in flour mixture alternately with buttermilk.  Pour into tube wells.

Bake for 20-25 minutes or until wooden pick inserted in cakes comes out clean.  Cool in pan on wire racks for 10 minutes.