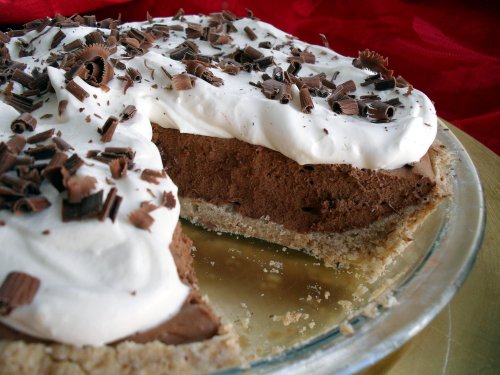 Every time my husband sees a French Silk Pie, or a picture of one, or even the name of it listed on a menu, he says, “oooooh, French Silk.”  After ten years of this, I finally decided it was time to make him one–and what better day than Valentine’s Day?  It is, after all, considered the most romantic pie to share by 27% of Americans.  (I acquired this tidbit of trivia from Village Inn restaurant, where it was noted in a bubble beside a picture of the pie…which I noticed after Dennis said “oooooooh, French Silk.”)

Both Dennis and I agree that this one was the best French Silk either of us has ever had.  Some I’ve had in the past had fillings that were thicker, more like pudding, but this one, although rich, is light and velvety and very chocolatey. The crunchy crust is nutty and a bit salty, which really complimented the sweet filling & whipped cream perfectly! My husband doesn’t like crust but actually enjoyed it for the first time in his life with this pie. I chose to top the pie with stabilized whipped cream since I needed to make it in advance and didn’t want the whipped cream to water out before we dug in.  This particular whipped cream can be made 24 hours in advance without watering out, so it is a nice recipe to keep handy if you need to make your whipped cream the day before serving your dessert.

Make the crust: Preheat oven to 325 degrees. Butter a 9-inch pie plate; set aside. (I recommend using a deep dish plate–I used a regular one and had enough leftover crust & filling to make a second miniature pie.) Grind pecans in a food processor, or chop very finely with a knife. In a medium bowl, combine flour, pecans, sugar, and salt. Cut in cold butter with a pastry cutter until mixture resembles coarse meal. Press firmly into prepared pie plate. Bake until golden, 20 to 25 minutes. Transfer to a wire rack to cool. (Mine took 25 minutes to cool completely.)

Make the filling: In the bowl of an electric mixer fitted with the paddle attachment, cream butter and sugar until light and fluffy, about 2 minutes. With machine running, gradually add melted chocolate and the vanilla. Add eggs, one at a time, beating at medium speed for five minutes after each addition. Pour filling into cooled pie crust. Cover with plastic wrap, and transfer to the refrigerator to cool for at least 4 hours and up to overnight.

Just before serving, top pie with whipped cream, and decorate with chocolate curls.

*I only had unsalted butter, so I added 1/4 teaspoon salt to the recipe, for a total of 1/2 teaspoon.

Refrigerate your mixing bowl and beaters for at least 15 minutes. (I always place mine in the freezer.)

In a small saucepan place powdered sugar and cornstarch and gradually stir in 1/4 c of the cream. Bring to a boil, stirring constantly, and simmer for just a few seconds (until liquid is thickened). (Mine thickened before it ever came to a boil.) Scrape into a small bowl and cool to room temperature. (I placed mine in the freezer, stirring every few minutes, to speed the process.) Add vanilla.

Beat the remaining 3/4 cup cream just until traces of beater marks begin to show distinctly. Add the cornstarch mixture in a steady stream, beating constantly. Beat just until stiff peaks form when the beater is raised.

Store in the refrigerator until ready to serve. 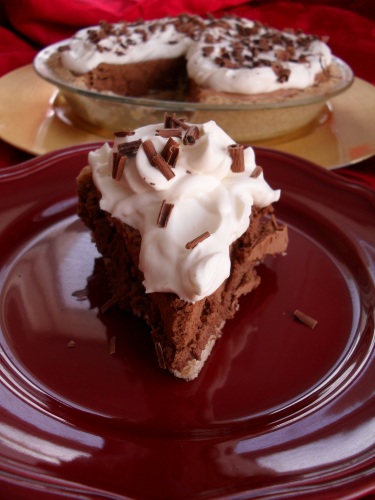 I have a kitchen addiction and love to collect & share recipes. My passion is baking but I love to cook as well. The only thing I don't like to do in the kitchen is wash dishes, but my husband generally does them for me in exchange for his dinner.
View all posts by Veronica »
← Butter Pecan-Rum Cake
Peppermint Patties →