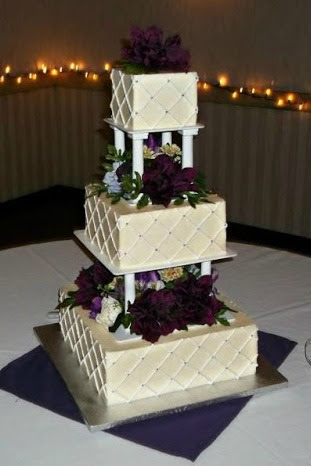 Welcome to another edition of Things I Like Thursday (TILT)! Today begins a series containing the many things I love to use to make cake & cupcake decorating quick and easy.

I’m going to start with just TWO piping tips, because I use them for nearly every cake, and/or cupcake I make. They are very inexpensive, and worth the small investment. Each of these have had about twenty five years of use between my Mother and I, and have stood the test of time. I would not be nearly so fond of making cakes and cupcakes if it weren’t for these tips. 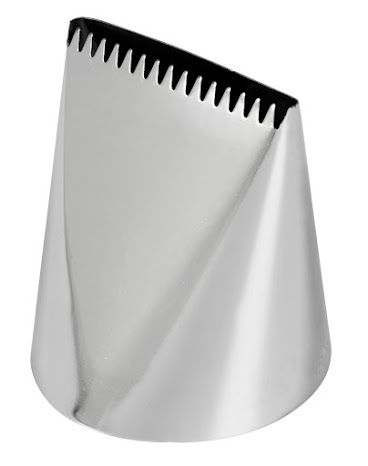 The first is Wilton’s “Icer Tip” #789. I used it to frost both wedding cakes above, and nearly every other cake I’ve ever made. It’s wide and flat and you use it to pipe frosting in an even layer in stripes all over your cake.  This means you don’t have to crumb coat it, it means that once you stripe your cake, all you have to do is smooth the lines.  (Don’t forget my water bottle trick for a perfectly smooth finish on your frosted cake!)  You can see me in action using my trusty icing tip in the video below.

The second is just as invaluable to me, as I now go the easier route of cake-making, doing cupcakes instead.  All it takes is 1-2 seconds per cupcake to pipe on a pretty swirl and voilà! You’re done. It’s probably the fastest thing you’ll ever do with this nice a result. 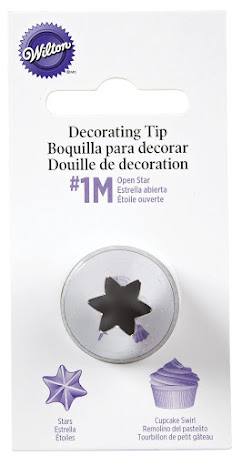 I use Wilton’s Tip 2110 (1M) for nearly all my cupcakes, as I just prefer the size of swirl it makes, and I also use it to decorate my most popular cake on this site, the Cookies ‘n Cream Cake, along with CW’s Strawberry Shortcake, and many pies, like Key Lime Pie, and yesterday’s Strawberry Cream Cheese Pie. Pretty much anything requiring a swirl of whipped cream, this is the tip I use.  I have a video tutorial on how to use it to frost cupcakes here if you want to see this tip in action. 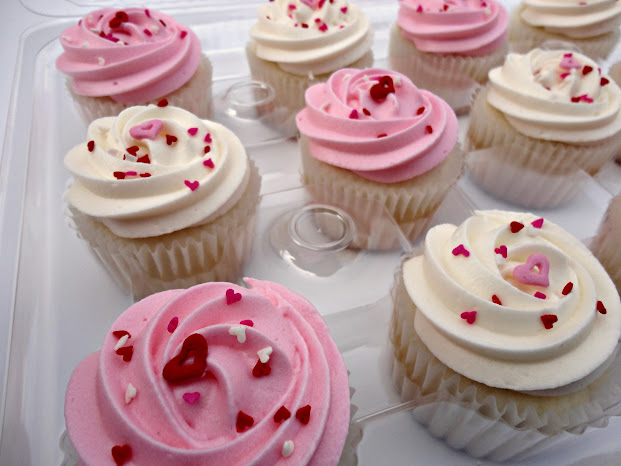 I hope this TILT was helpful, and that you haven’t been overwhelmed with the sheer amount of links I was able to provide in just one post. Ha! Catch you next week with another cake-y edition of Things I Like Thursday.

Some links are affiliate. All opinions are my own, I wouldn’t recommend something I didn’t stand behind 100%.

In the name of culinary exploration, I bought a single bottle of Guiness to make Wednesday’s cupcakes, knowing I could never use an entire 6-pack.  Unfortunately, the bottle was pretty ginormous so I still have more than half of it left.  I also have quite a bit of Bailey’s left, and since I can’t give this stuff to people I know who drink because they either don’t drink anything but the occasional wine or have drinking problems, I’m either going to have to toss it or keep baking up a storm with it.  And you guys know I can’t waste anything, right?

Hence, these brownies.  These crazy, rich, gooey, decadent brownies.  I went with my Kahlua brownies recipe, switching out the Kahlua for Guiness, and then went a little crazy with the mix-ins, adding butterscotch chips, white chocolate chips, and walnuts.  Then I glanced the cream cheese in my fridge and got excited, thinking of my Brownie Cakes recipe and using it as a springboard to create a Bailey’s Irish Cream cheese swirl.

I liked these a lot, despite the Guiness.  I’ve discovered from reading Guiness & chocolate recipe reviews on blogs that I may be the only blogger alive not in the “Yay, Guiness and chocolate are the best combo evarrrr!” camp, but at least the flavor was not overpowering here, thanks to the sweet chips and cream cheese swirl.  There is a slight yeasty flavor from the Guiness, which is interesting but not off-putting.  For most people, that would translate to, “Yaaaaaaay, Guiness brownies are the best thing EVARRRR!!!!”

The only bad thing about these brownies (unless you want to count the calories, but who counts dessert calories??), is that they used up so little of this leftover alcohol.  I’m giving up on the Guiness, but as for the Irish cream…Bailey’s Banana Bread anyone?

Preheat oven to 350 degrees. Grease the bottom only of a 9×13” baking pan and set aside.

Combine the first four ingredients in a large mixing bowl and whisk until shiny and smooth, about a minute. Add optional mix-ins and stir until well combined. Spread into prepared pan; set aside.

Beat the cream cheese and sugar in a small mixing bowl until creamy, then beat in the egg and Bailey’s Irish Cream. Drop batter by spoonfuls on top of the brownie batter and swirl through with a knife.

Bake for 40 minutes, or until the cheesecake is golden on top and the brownies are puffed in the middle but firmer at the edges. Allow to cool completely before cutting.

OK, so this blog was too long to include this story before the recipe, but I wanted to put it at the end for those whose patience is still holding.

In high school drama class, we were doing a project where we were creating a spoof episode of the X-Files.  I remember nothing about the episode we came up with, except that some genius decided to cast me as an evil leprechaun.  (Speaking of evil leprechauns, doesn’t that one in my first picture look a little sadistic?)  We were actually filming it, just like a real TV show.

I showed up on filming day dressed head to toe in bright green.  I had no idea what I was going to wear for the role, but my mother happened to have a pair of bright green corduroy pants (oh, the glorious high fashion of the 90s!) stashed away in her closet.  She was a tiny woman and even at 115 pounds, I really had to stuff myself into those things and could hardly breathe all day.  I paired it with a matching shirt and called it golden (or emerald, if you will).

For my scene, we were filming in the hall and I was told to run off laughing after delivering my line.  It wasn’t until the camera started rolling that I thought to wonder how long I should run while laughing.  Convinced I should fight my urge to do it only a few seconds, thinking it was just my shyness trying to get the better of me, I tore off down the hall, squealing insanely with evil leprechaun laughter, throwing my hands up over my head and swinging them wildly back and forth as I ran…all the way down the hall.

I passed about five classrooms, squealing with high-pitched insane laughter at the top of my lungs.

When I turned back around, hoping I’d laughed long enough, there were curious heads leaning out of every single closed door I had passed, and in the far distance, I could see my classmates rolling with laughter while my drama teacher looked like he wished he could crawl under a rug.

I could have died.  The walk back to join my drama group was the longest walk of my life.  Every classroom stared at me as I passed, surely wondering who the crazy girl dressed in green was and if there was anything beyond my insanity that spurred the laughter that disrupted their class.

And of course, after that day, I was known far and wide as “the evil leprechaun.”

I threw these together last-minute for a birthday gift with some leftover raspberry puree I’d made for another project and they garnered high praise from the recipients (the birthday girl, her sister, and my husband who nabbed a huge hunk for himself before I packaged them.)  I always test my treats to make sure they’re worthy of gifting and oh boy, these were good.  I meant to have half a brownie, but of course I had to eat the entire thing after the first bite.  I love the tart berry flavor with the sweet dark chocolate.  Oh yeah, baby.

Preheat oven to 350 and grease the bottom of a 9×13″ pan with shortening.  Mix everything but the raspberry puree about 50 strokes, or until glossy & well-mixed.  Pour into prepared pan and smooth with a spatula.  Pour small puddles of raspberry puree over the top, then run a knife through them from side to side lengthwise and then width-wise a few times to create a marble effect.  Sprinkle chocolate chips over the top. Bake for 30-40 minutes, or until toothpick inserted one inch from side of pan comes out clean.  Cool completely on a wire rack before serving.  For easier cutting, place pan in refrigerator for a 1/2 hour. These can be frozen for up to six months in an airtight container.

Place berries in a microwave-safe bowl and heat for a minute, stir, and continue heating in 30 second bursts, stirring in between, until they are defrosted but not hot.  Their juices should be flowing.  Place a wire sieve over a bowl and dump the berries into it.  Stir them until they have given up about 1/2 cup of juice.  Pour the juice into the bowl you used to heat the berries and microwave, stirring occasionally, until liquid is reduced to 2 tablespoons.  Stir the drained berries into the reduced juice along with the lemon juice and sugar.  You can process this until smooth or you can just stir it to leave it slightly chunky, which is what I prefer.  Store extra covered in fridge–goes great on pancakes.  Can be stored 10 days in the refrigerator  or 1 year frozen.