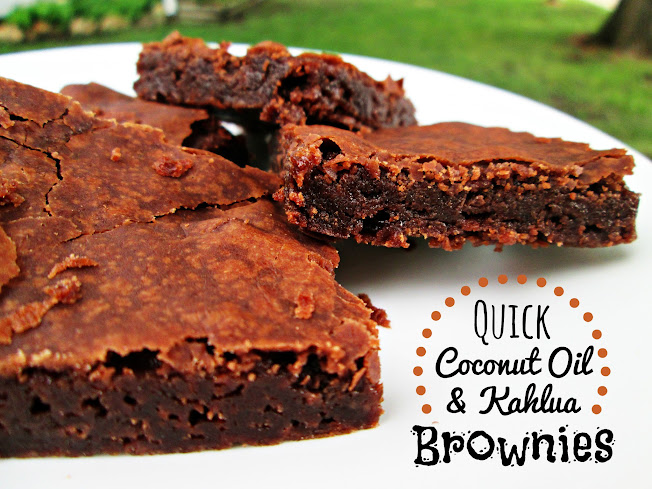 In looking over all the food photos I have in my “future blog” folder, I’m noticing a trend. Everything is baked in the oven! In the past, I’ve tried to save most of my baked recipes to share in cooler weather, but I just bake so much in summer, that’s really all I’ve got for you. Even the main dishes I’ve been making have come from the oven.  Am I the only one? Maybe I’ve got some Australian readers eager for baked treats & casseroles? haha! 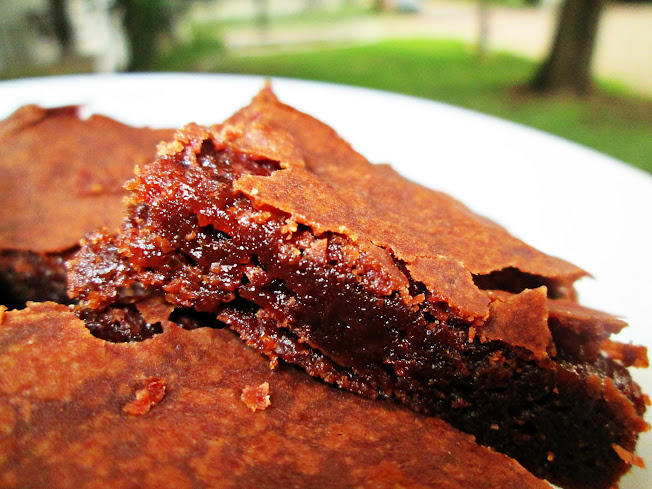 So these are a box mix recipe which I know, is probably a food crime combining wonderful virgin coconut oil in conjunction with a box mix, but it’s really good! If you’re wanting a good from-scratch coconut oil brownie you might be able to just sub coconut oil in my favorite Fudge Brownies recipe.  But if you’re in a hurry, this one will do you.

My usual trick to make box mix brownies taste homemade is to sub melted butter for the oil, but I was out, so I used coconut oil. The slight coconut oil flavor mixed with the Kahlua (I used my homemade stuff) is pretty out of this world. Using the coconut oil changes the finish on the top and although it’s got that flaky crispy layer, it’s dull, not shiny. I also noticed they were harder to remove from the pan, but nice and fudgy and the flavor is much better than just following the instructions on the back. Enjoy! 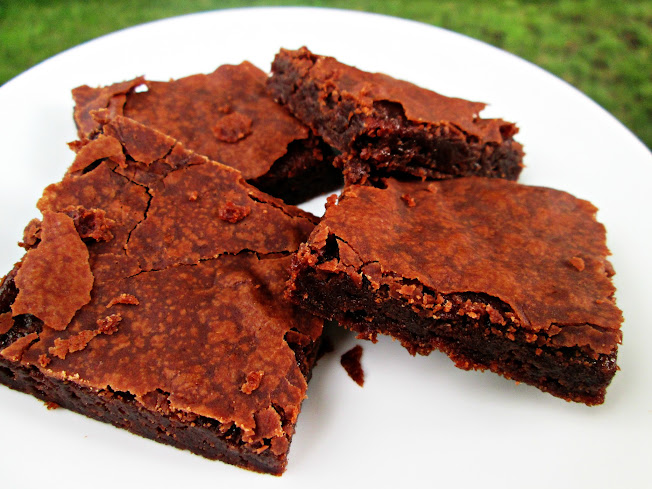 Mix all ingredients and bake according to package directions.

Veronica’s note: You want the ingredients at room temperature to keep the coconut oil from hardening during the mixing. If it hardens, it will not mix evenly. Also, if your box calls for 1/2 cup oil, use 1/2 cup coconut oil, not 2/3 cup. Mine turned out pretty thin in a 9×13 pan so if you like thicker brownies, go with a smaller pan. 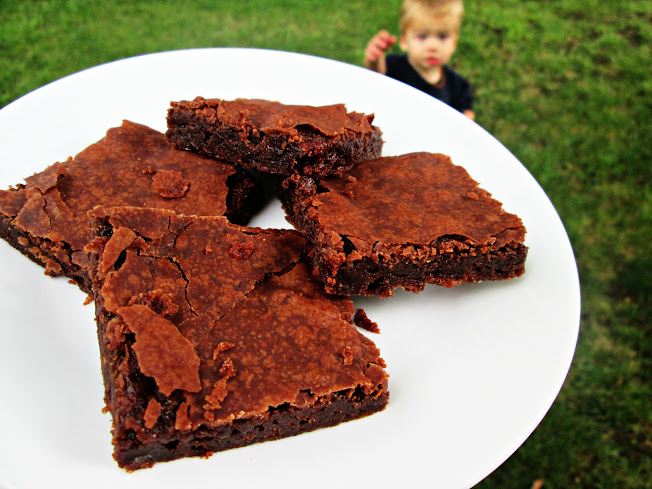 You can’t see in this photo, but he’s already holding a half-eaten brownie while reaching for another. These are definitely Joshua-approved. I served these to five other children and three adults besides myself, they were a hit all-around.

I threw these together last-minute for a birthday gift with some leftover raspberry puree I’d made for another project and they garnered high praise from the recipients (the birthday girl, her sister, and my husband who nabbed a huge hunk for himself before I packaged them.)  I always test my treats to make sure they’re worthy of gifting and oh boy, these were good.  I meant to have half a brownie, but of course I had to eat the entire thing after the first bite.  I love the tart berry flavor with the sweet dark chocolate.  Oh yeah, baby.

Preheat oven to 350 and grease the bottom of a 9×13″ pan with shortening.  Mix everything but the raspberry puree about 50 strokes, or until glossy & well-mixed.  Pour into prepared pan and smooth with a spatula.  Pour small puddles of raspberry puree over the top, then run a knife through them from side to side lengthwise and then width-wise a few times to create a marble effect.  Sprinkle chocolate chips over the top. Bake for 30-40 minutes, or until toothpick inserted one inch from side of pan comes out clean.  Cool completely on a wire rack before serving.  For easier cutting, place pan in refrigerator for a 1/2 hour. These can be frozen for up to six months in an airtight container.

Place berries in a microwave-safe bowl and heat for a minute, stir, and continue heating in 30 second bursts, stirring in between, until they are defrosted but not hot.  Their juices should be flowing.  Place a wire sieve over a bowl and dump the berries into it.  Stir them until they have given up about 1/2 cup of juice.  Pour the juice into the bowl you used to heat the berries and microwave, stirring occasionally, until liquid is reduced to 2 tablespoons.  Stir the drained berries into the reduced juice along with the lemon juice and sugar.  You can process this until smooth or you can just stir it to leave it slightly chunky, which is what I prefer.  Store extra covered in fridge–goes great on pancakes.  Can be stored 10 days in the refrigerator  or 1 year frozen.

I’ve seen recipes like this floating around the blog world, most recently on Brown Eyed Baker, but there was a glaring problem with them.  They had no salt!  Tell me you’d eat taco meat that had no salt in it.  So I made my own mix that included salt and it came out perfect–almost exactly like the packaged mix but with no scary ingredients.  I used the meat from my first batch to make that wonderful white trash taco salad stuff with Doritos & a whole bottle of French dressing in it, but the meat can obviously be used in tacos, nachos, or whatever else your creative little mind desires.

Whisk together all ingredients in a small bowl.

Over medium heat, brown 1 lb ground beef and drain. Stir in 2 ½ tablespoons taco mix & ½ cup water. Continue cooking over medium heat until the sauce thickens and coats the meat and there is not much liquid left. Store remaining seasoning mix in an airtight container at room temperature.