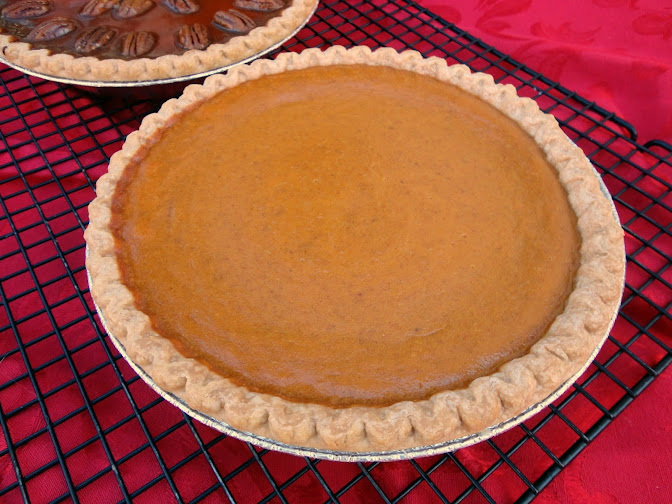 I make this pie every year for Thanksgiving and every year I forget to blog it when Thanksgiving rolls around again.  Well that ain’t happenin’ this year!  I need this sucker on my blog for next year when I make the pie and need to look up the recipe.  It will be so much easier to find it where I keep all my favorites. :) 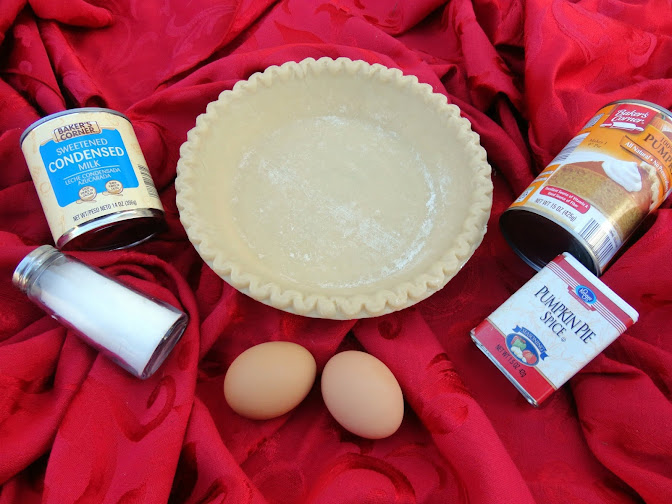 This is all you need to make the pie. How simple could this be?

If you’re looking for a simple traditional pumpkin pie recipe, this one has got you covered.  I prefer pumpkin gooey butter cake to pumpkin pie, but I have to provide a real pumpkin pie for those who actually enjoy it in my family, namely our oldest nephew, who is a pumpkin pie purist.  This simple recipe has a traditional taste, but comes together quickly with a purchased crust, and because it combines two ingredients (milk & sugar) into one (sweetened condensed milk), and uses pumpkin pie spice, there is much less measuring than with a traditional recipe.

Despite my yearning to add more ingredients (sweet potatoes! cream cheese! vanilla bean! booze!) to change things up, I always resist this since I know my oldest nephew wouldn’t touch anything but a real pumpkin pie.  And I’m always pleasantly surprised at how wonderful it tastes without any extra additions.  Great texture with a perfect balance of spices & sweetness.  May the pumpkin pie purists in your family rejoice & be thankful. 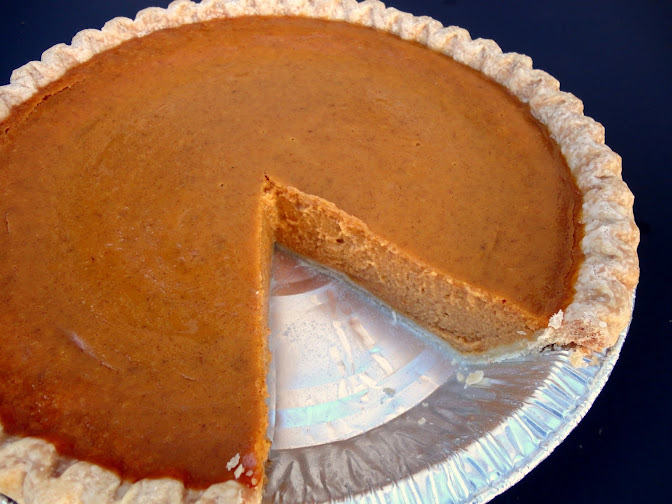 In a medium bowl, lightly beat eggs, then add the remaining ingredients, except for the egg white, and beat to combine.  Do not go crazy with the beating, you just want everything mixed without excessive air bubbles.  Set filling aside and brush the egg white over the bottom and sides of the pie crust.  This will create a seal & help prevent the crust from becoming soggy.  Pour the filling into the pie crust.

Bake 15 minutes at 425 degrees. Reduce oven temperature to 350 and continue baking 35-40 minutes or until knife inserted in center comes out clean. I don’t like to mar the pretty surface, so I bake the pie until it is mostly set but still a little jiggly in the center because the residual heat will continue baking it after you remove it.  Cool pie completely before cutting. Garnish with whipped topping, if desired. Refrigerate any leftovers.

I’m atoning for my sins of last week: fattening, nitrate-filled chili-cheese dog casserole, decadent red velvet cake with a pound of butter and over a pound of cream cheese in it, and beef roast slathered with high-sodium cream of mushroom soup and onion soup mix.  I felt I owed myself, and you, a healthy reprieve.

I usually don’t like labeling my recipes “healthy” or unhealthy” in the title (although I have been known to do so) because that’s not how I want you to think of them.  If something is healthy, I want you to think about how delicious it is, not how healthy it is.  And if something is unhealthy, I don’t want you to focus on that either, I just want you do enjoy your splurge.  So, I’m not labeling this as “healthy” in the title, but I am telling you right now it’s pretty darn healthy.

First of all, it’s naturally sweetened from three sources: apple cider, maple syrup, and honey (because it’s sweeter and because I was running low on maple syrup).  Second, it’s packed with fiber from the pumpkin and the oats.  It’s even got a little protein from the eggs (and the oats)!  I did use a smidgen of butter, but I’m not one who thinks of butter as unhealthy, especially in meager amounts.  It could easily be left out if you want to reduce the fat.

Now let’s talk about the important stuff: the taste.  It’s all well and good to eat healthy foods, but who wants to eat them if they taste terrible?  Not me, and there’s no reason to when healthy food can (and should) be just as delicious as unhealthy food.  These baked oats are perfectly sweet, with a great spiced pumpkin taste, very soft and creamy, with a nice nutty crunch from the pecans.  Served with a drizzle of maple syrup over the top, it is a breakfast treat that is good enough to make your mouth so happy that you forget that you’re doing your body good as well.

Preheat oven to 350. Spray a deep-dish pie plate or a casserole dish with oil; set aside.

Pour into prepared dish and sprinkle with pecans. Bake for 35-40 minutes, or until set. Serve hot with maple syrup or honey.

Recipe source: adapted from The Other Side of Fifty, as seen on Betcha Can’t Eat Just One and Little Bit of Everything (this one’s really making the rounds!)

If you have leftovers, they will slice a lot nicer and will resemble a piece of pie more when served. You can even serve this cold, though I do like it better hot! If you want the oatmeal to be more firm so that you can slice it like pie after removing it from the oven, you’ll have to do some tweaking to reduce the amount of liquid and maybe add another egg.