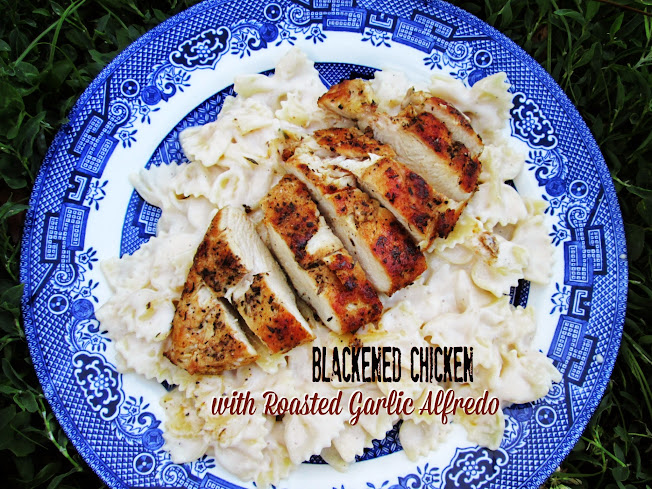 Dennis is a huge fan of blackened meat.  And by blackened, I don’t meant burnt (that would be me that likes burnt meat), I mean meat that’s been rubbed with spicy blackening seasoning.  So when I ran across this recipe, I knew it would be perfect for Father’s Day.  It was perfectly suited for him, is impressive, but simple to prepare, which is pretty much a requirement for all the recipes I make these days.  It was incredibly delicious, and I would make it again, and again, and again. 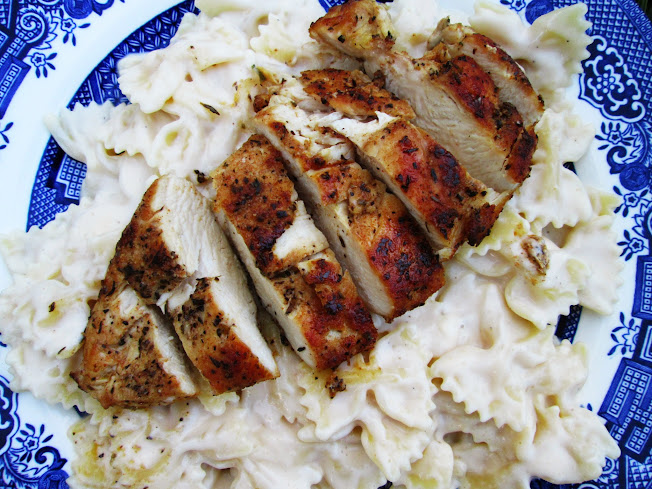 Drizzle olive oil over chicken breasts to lightly coat. Sprinkle blackening seasoning liberally over both sides of the chicken. Heat skillet on medium-high and cook chicken 3 minutes on each side. While chicken is cooking, heat Alfredo sauce and roasted garlic. Add pasta and toss; divide between two dishes. Slice chicken and place on top of pasta. Sprinkle with Parmesan cheese, if desired.

Veronica’s notes: In a pinch, you can sprinkle in some garlic powder to taste instead of the roasted garlic.  Also, Bertolli’s jarred light alfredo works great for this recipe if you can’t find the fresh stuff.

Here’s the card I made for Dennis this year.  It may be my favorite card I’ve ever made. :) He loved it! 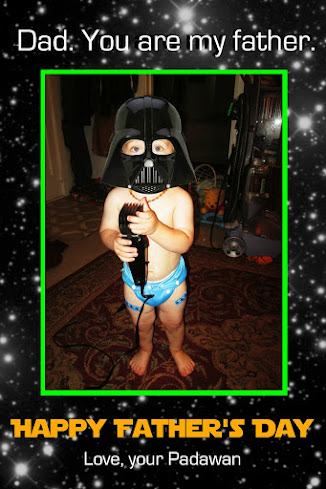 I made this recipe in the spring and thought it would be nice to share in the fall when it was starting to get chilly.  Not so chilly that you are ready to dig into the really heavy foods, but are just starting to think about it.  That day has come a lot sooner than I expected!  Does it seem like an early fall is coming on in your neck of the woods as well?

If so, here’s a fantastic meal that seems pretty hearty and is totally comforting while still managing to be quite healthy and diet-friendly.  Debbi, the creator of this recipe, calculated it as only about 200 calories per serving (1/8th of the recipe) so even if you ate half of the whole casserole (which would be quite a feat!), you’d probably still be eating less calories than a restaurant alfredo dish would have, and it’s so much healthier!

I thought this dish was absolutely positively scrumptious and although it takes some time to prepare because you have to pre-roast the spaghetti squash, it’s very simple.  I eat a lot of spaghetti squash, but this is only one of two dishes I’ve ever eaten it in with such gusto.  I don’t even like alfredo sauce, especially jarred, and I L-O-V-E-D this meal.  I really felt like I was indulging because meals this delicious usually have a ton of fat and calories.  Not true in this case–it really is like having your cake and eating it too!

Split spaghetti squash in half lengthwise and scoop out the seeds. Line a baking sheet with foil and spray with cooking oil. Place the squash face-down on the sheet and roast in oven at 375 for about 45 min – 1 hour or until tender when poked with a fork on the underside.  Let cool until you can handle the squash without burning your hands, and scrape the squash out with a fork into a 9 x 13 pan sprayed with cooking spray. Leave the oven on.

While the squash is cooling enough to handle, cook bacon until crispy and remove to a plate to cool.  Grill onions in the small amount of bacon grease in pan, using additional oil or cooking spray if needed. If you want your onions to get crispy dark edges, let them sit for a minute or two before stirring each time. Season with salt and pepper and set aside.  Crumble the cooled bacon.

Spread alfredo sauce over the spaghetti squash in the pan, sprinkle on half the cheese, top with chopped chicken, bacon and sauteed onions, then top with remaining cheese.  Bake, uncovered, for about 25 minutes until heated through and cheese is melted.