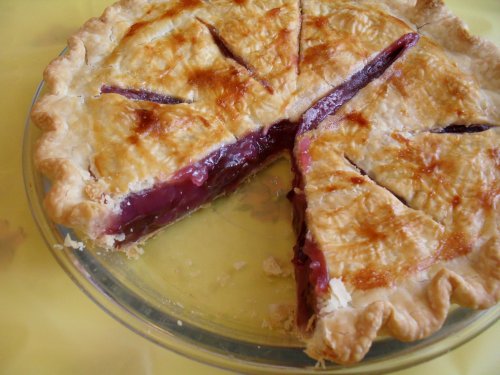 If you’re a fan of Janet Evanovich, you might have recognized the “Plum Lovin'” part of the pie title.  I just couldn’t help myself!  I’ve read every one of the Stephanie Plum novels!  I’m kinda addicted to them the same way I’m addicted to sugar.  Epic, brain-stimulating meat and potatoes novels have their place, but we all need book desserts once in a while too, and this series is mine. 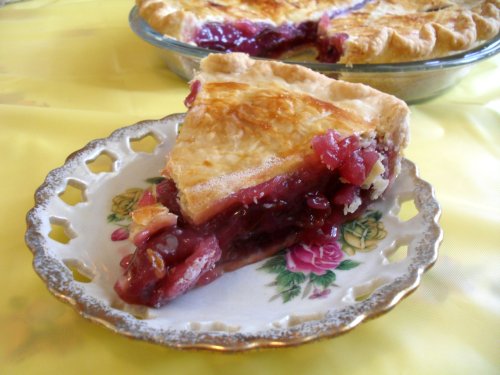 Anyway, I thought I’d get this recipe up in honor of mothers since I first made this pie for Mother’s Day last year.  It disappeared so fast that I didn’t realize I failed to get a picture until it was too late.  It got high praise at my husband’s family’s annual Mother’s Day barbecue and again this year on Easter.  It’s a very simple pie that doesn’t disappoint.    Do ma a favor and make her one yourself!  And get her a copy of One for the Money while you’re at it!

This pie is best with my favorite pie pastry, which I used the first time, but pictured is the pie I made in a pinch with Pillsbury refrigerated pie dough.  Although I could never condone such methods (do as I say and make your own crust, not as I do), it works and the pie doesn’t suffer much for the added convenience. 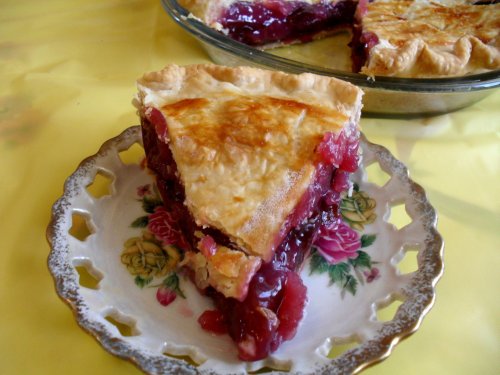 Place the oven rack in the lower third of the oven and preheat to 400 degrees. Strain the juice from the plums into a large saucepan. Cut the plums in half, then half again, pitting as you go. Set plums aside. Mix together the sugar, flour and salt in a bowl. Do not skip this step or you’ll have flour lumps. Pour the mixtures into the saucepan with the plum juice. Cook the mixture over medium heat stirring often at first, then constantly as the mixture heats. Cook and stir, scraping the bottom of the pan with a wooden spoon until the mixture is very thick and gooey. Turn off the heat from under the sauce pan. Add the almond extract and sliced plums and stir to combine. Set aside. Line a 9″ pie plate with pastry and brush lightly with egg white. Pour the hot filling into the pie dish, arranging the plums around if needed. *Don’t overfill the pie. Leave out a little of the juice if it gets too full.* Dot with butter and top with the top crust. Flute, brush the top with some of the remaining egg white, and cut vents into the dough. Place a pie shield over the crust and bake pie for 30 minutes, then remove the pie shield and bake for about 10 more minutes, or until golden brown and done on the bottom. Remove from the oven and cool on a cooling rack for several hours or overnight. 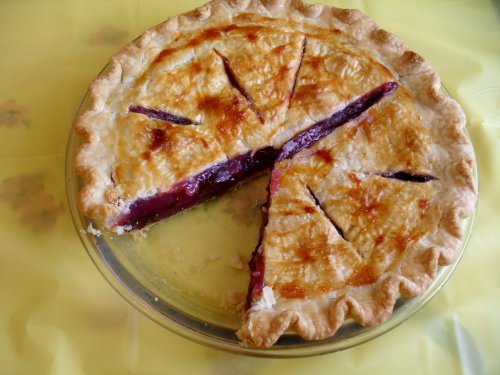 I have a kitchen addiction and love to collect & share recipes. My passion is baking but I love to cook as well. The only thing I don't like to do in the kitchen is wash dishes, but my husband generally does them for me in exchange for his dinner.
View all posts by Veronica »
← Banana & Orange French Toast
Homemade Kahlua {Coffee Liqueur} →