This spicy vegan dip originates in Syria and I didn’t discover it until my friend, Pia, introduced me to it.  It’s her favorite dip and she recommended it to me when she found out I enjoy Middle Eastern cuisine.  I knew it was right up our alley simply because it’s spicy, and since I’d seen some of the pomegranate syrup the recipe calls for at a market attached to our favorite Lebanese restaurant, I snapped a bottle up next time we were there and set out to make this dip.

It is great simply as a dip, but I’m also going to include a “recipe” for a veggie wrap that I’ve incorporated it into for quick lunches.  The first time I served this to my husband, he raved, and it wasn’t until afterward that I realized he had eaten an entirely vegan meal with no complaints. Score!

Chop the peppers roughly and place them, along with all the remaining ingredients, except the olive oil, into a food processor or blender. Pulse to roughly chop the ingredients, then slowly pulse in the olive oil. Try not to purée the ingredients too much. You want the dip to have a little texture.  Adjust seasoning to taste and serve as a dip or spread with pita wedges, vegetables or kebabs.

*Veronica’s notes: the original recipe calls for four fresh red peppers which you roast before processing.  Click the recipe source link below for instructions on this if you would like to do it this way.  The original recipe also calls for red pepper flakes instead of sriracha, so that can be used in place of sriracha if you desire.  As for the pomegranate syrup, my bottle is actually a pomegranate juice concentrate and I know that Pom is now selling this so you might be able to find it where Pom brand pomegranate juice is sold if you don’t have a market that sells ethnic foods in your area.

Spread muhammara down the center of your tortilla or bread, then sprinkle on some beans, a little parsley, a handful of spinach and shredded carrots.  Wrap tightly and cut in half to serve. 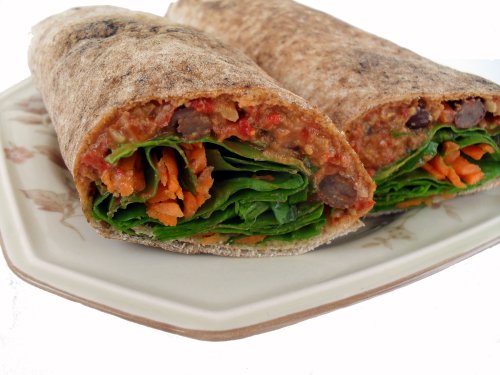 *I used a pita “tortilla” for my wrap bread:

***For those who wish to participate in BSI this week, don’t forget to submit your cream cheese recipes to me by Sunday night!  Details here.***

I have a kitchen addiction and love to collect & share recipes. My passion is baking but I love to cook as well. The only thing I don't like to do in the kitchen is wash dishes, but my husband generally does them for me in exchange for his dinner.
View all posts by Veronica »
← My Favorite Cheesecake and BSI: Cream Cheese Announcement
BSI: Cream Cheese Roundup and Winner →