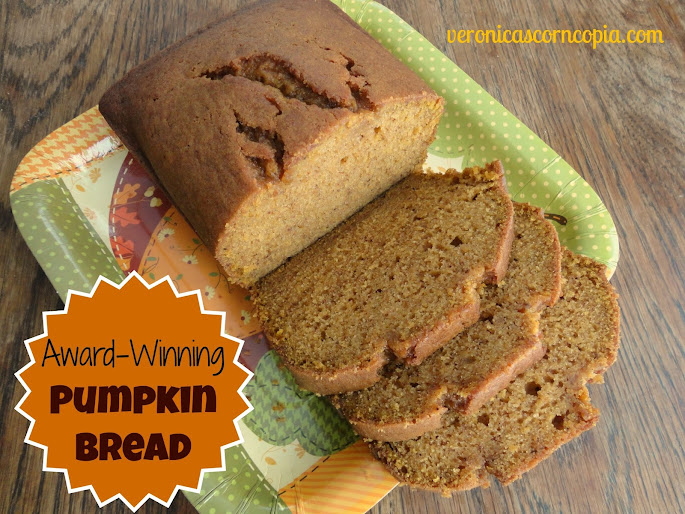 I baked this bread for the first time in 2010 to enter into the state fair pumpkin bread competition.  I’d never tested it out first, I just decided I’d bake it and enter it, and it won a third place ribbon so I figured it must be good.  I never baked it again until last week so I just now, over three years later, got to taste the bread I’d won a ribbon for.  Yes, I know, I’m a wild and crazy kind of gal. :) 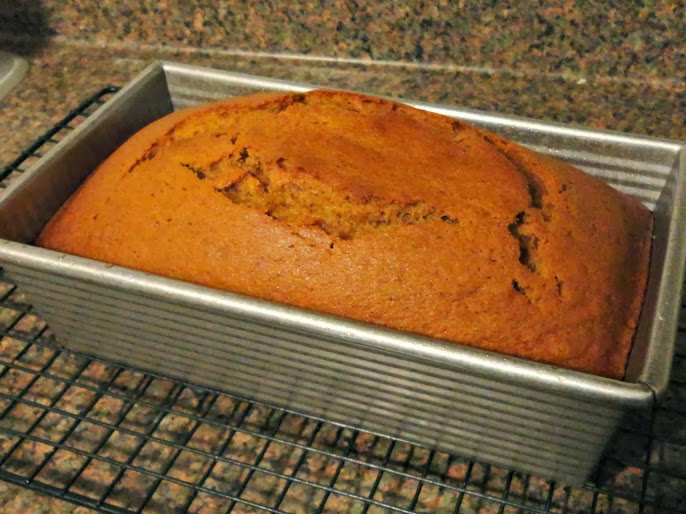 And it’s SO GOOD!  Sorry for yelling, but I CAN’T CONTROL THE VOLUME OF MY VOICE WHEN SOMETHING IS THIS GOOD!  It’s really good.  The flavor is great–sweet, pumpkin-y, and perfectly spiced so that it’s not overly spicy, but just enough to compliment the pumpkin flavor without overwhelming it.  But it’s more the texture that captivates me.  It’s incredibly tender and almost delicate, but not enough so that you’d mistake it for a cake.  So crazy moist!  I just am in love with the texture of this bread and wish I could replicate it in every sweet bread and muffin possible.  WHY DID THE JUDGES ONLY GIVE ME THIRD PLACE?  Because they are even more wild and crazy than I am, obviously. 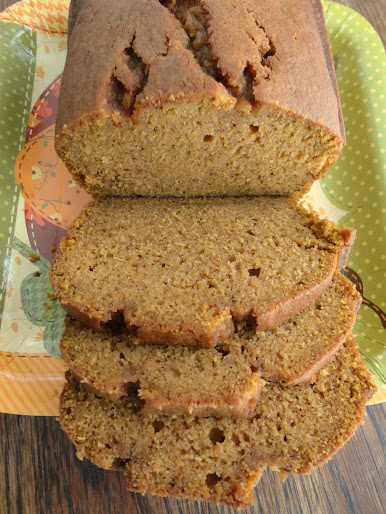 Preheat oven to 350F. In a large mixing bowl, combine pumpkin, sugar, vegetable oil, water, and eggs. Whisk until well mixed. Measure the flour, baking soda, cinnamon, salt, baking powder, nutmeg, and cloves into a separate bowl and stir until combined. Slowly add the dry ingredients to the pumpkin mixture, beating until smooth. Spray a 9×5* loaf pan and pour batter in, smoothing the top flat. Bake for 60-70 minutes or until a toothpick inserted in center comes out clean. Immediately remove from pan, cool completely on a wire rack, and wrap in plastic wrap. The bread gets better after a day so wait till the next day to cut it if you can stand it. :)

**This makes a lot of batter so if you use a smaller pan, you’ll likely have to increase the baking time.

Looking for more award-winning recipes? I gotcha covered! Here are a few of my blue ribbon winners, and you can check out the rest here. 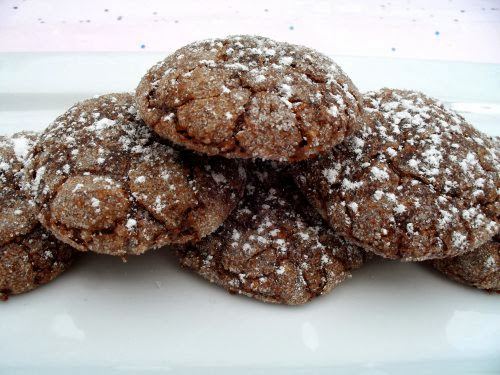 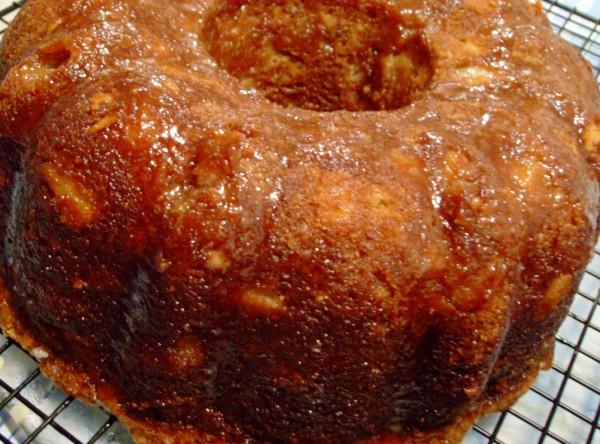 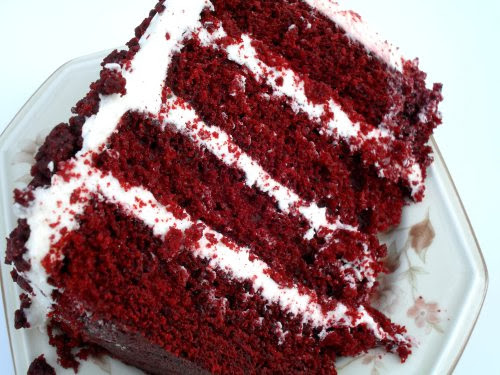 It’s been so long since I posted the recipe for Rosemary Sage Burgers with Chive Mayo that many of you may not even remember this picture: 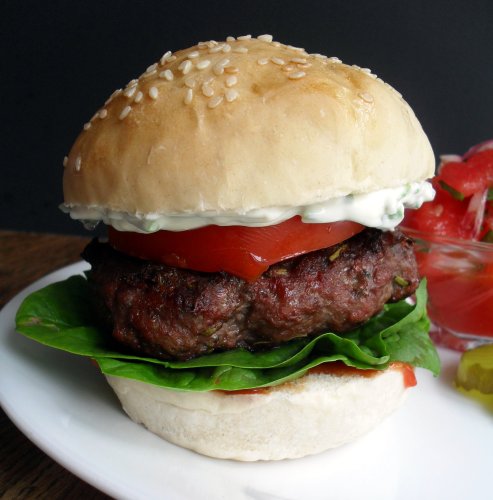 Yeah, I posted that over three years ago.  I put that delicious burger on a delicious homemade bun, always intending to share the recipe. And didn’t.  Then I won a red ribbon for that recipe and still didn’t share the recipe.  I guess better late than never, right? 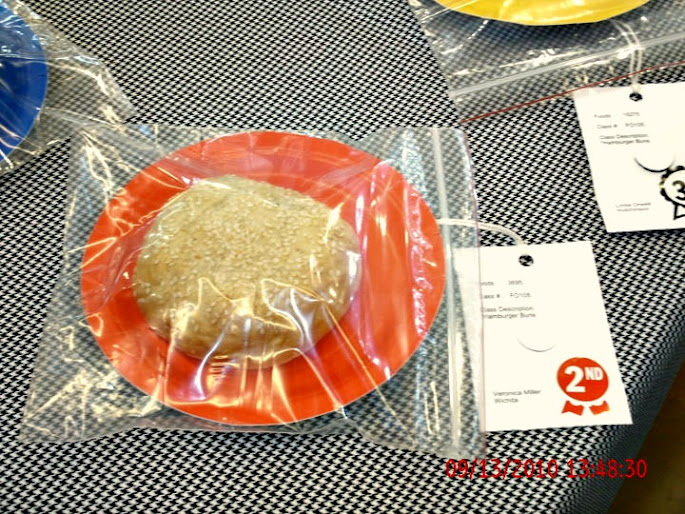 These buns are nice and soft with great flavor.  Making the dough in the bread machine makes them fairly easy, too! The only work you really have to do is shaping the buns, the rest is just waiting. 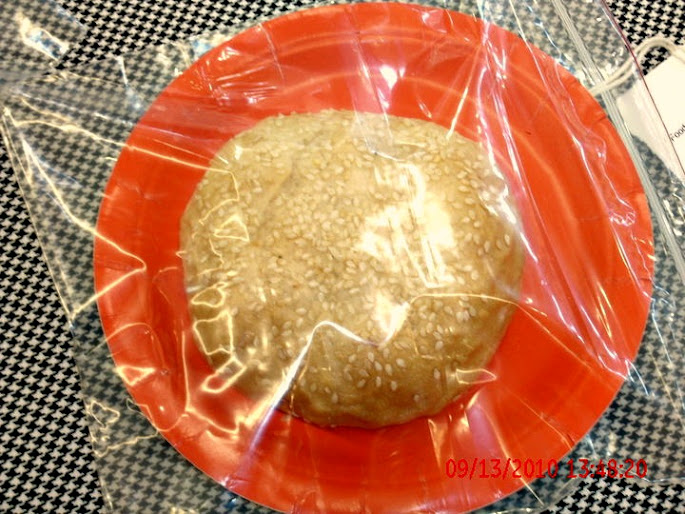 Measure all the ingredients into the bread machine pan in the order given, making a little well in the mound of flour to put the yeast in. Push pan in place, select the dough cycle, and push start.

When cycle finishes, turn out onto a floured board and punch down. Knead 4 or 5 times; add a little more flour as you knead if necessary to keep it from sticking. Cover dough with a clean dishcloth and let rest for about 30 minutes. Cover a baking sheet with parchment paper and sprinkle with cornmeal or flour.

For hamburger buns: Press dough into a circle and cut into 8 even wedges; form each wedge into a ball then flatten into a smooth and fairly even circle.

For hot dog buns: Shape these into long somewhat narrow snakes. (Makes about 12 or so.)

Place dough shapes on the baking sheet, cover with parchment paper or a clean dish towel, and let rest for about 30 minutes, or until doubled in size. If you’d like to add sesame seeds or poppy seeds to the tops, brush them with beaten egg white, then sprinkle the seeds on top.

The secret ingredients chosen for the Holiday Recipe Club‘s Cinco de Mayo blog hop were dulce de leche, tomatoes, and chorizo.  For last month’s Easter blog hop, I went crazy and put a lot of effort into creating something with all three secret ingredients (carrot cracker treats with carrots, spinach, and eggs).  This month, I’m totally cheating and taking the easy route by using this as an excuse to finally post my fresh salsa recipe that I won third place for at the fair last year.

My inspiration for the recipe came from my sister, Danielle, who usually only makes recipes that turn out things like soap, lip balm, or bath fizzies.  But one edible thing she does make, and well, is fresh salsa.  Her secret ingredient is orange juice, and while I didn’t follow her original recipe to a T, I did make sure to use some fresh orange juice in it. I also replaced the jalapeño with poblano, which is a mild pepper, sort of like a bell pepper with just a bit of kick to it.  (I love spicy food but I was making this salsa for the “mild” category.  The salsa also had to use fresh ingredients, which is why I didn’t just make my favorite salsa.)  If you’d like a hotter salsa, dice up some seeded jalapeño instead!

The judges loved my salsa, but said it had a bit too much garlic, so I’ve adjusted the recipe to up it to blue ribbon status by cutting the garlic from four cloves (hey, what can I say, I love garlic!) to two (the amount in Dani’s original recipe–I should have listened to the expert!).  But as with all recipes, just add amounts to suit your own tastes! 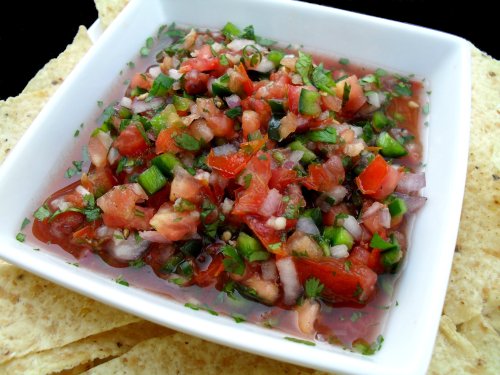 Finely dice the tomatoes, removing the seeded pulp as you go, and place them in a wire mesh sieve set over a bowl to drain for five minutes. Discard juice, then stir the tomatoes and all other ingredients together in a large bowl. Store in the refrigerator.

Check out the other Cinco de Mayo recipes in the blog hop by clicking below!

This is how crazy I am.  I made this pound cake for the first time last September and, without tasting it, submitted it to the state fair for judging.  I didn’t take a photo and haven’t made it since, even though it won third place for pound cakes.  The first two looked like they were made with browned butter, so I thought this must be a pretty good pound cake to get a 3rd place ribbon when this Plain Jane was up against some jazzed-up cakes.

I thought this was a good time to finally try the recipe for myself, while fresh berries are in season, because they make a nice topping for such a heavy cake.

If you aren’t already aware of it, you can confirm my undying love for cake by just taking a look at the long list of recipes I have posted for them (I have more cake recipes than anything else!).  But pound cake has never been my thing.  Which is just weird, because when it comes to cake, I’m all about the richness, and pound cake certainly fits that bill.  Perhaps it’s because pound cakes are served without frosting, and unlike certain aliens living among us (Ahem, my sisters! Imposters, I tell you.), I value my frosting and cake equally. However, this is one good pound cake.  Totally crazy-buttery with that soft and dense pound-cake texture.  A perfect base for a sweetened-berry topping and a dollop of whipped cream, or for a red, white and blue trifle, cubed and layered with berries and whipped cream. 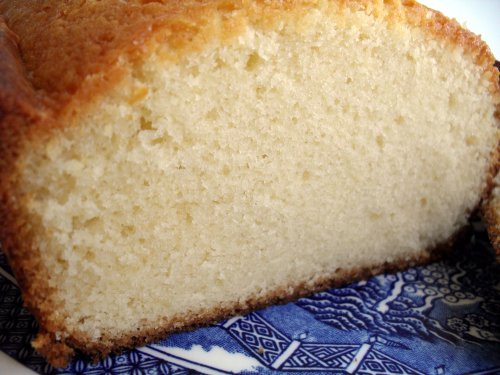 Stir the flour and baking powder together in a small bowl and set aside.  Fit your food processor with the blade attachment and add the sugar, butter, and salt to the bowl.  Process until light and fluffy, about 2 minutes, scraping down the sides and bottom of the bowl occasionally.  Add the condensed milk and pulse until well incorporated, about 15 times, scraping down the sides of the bowl once. Add the sifted dry ingredients and pulse until no traces of flour remain, about 10 times. Add the eggs and vanilla, and pulse just until combined, about 5 times. Scrape down the sides and bottom of the bowl and finish mixing by hand to fully incorporate the eggs.

Transfer the batter to the prepared loaf pan. Bake until the top is dark, golden brown and a tester inserted in center comes out clean, about 1 hour.  Cool in pan on a wire rack for ten minutes, then unmold and allow to cool completely on the rack, bottom-side down.

If you’ve been around for a while, you’ve heard me mention my foodie mama, Marina, before.  We met on MySpace three years ago, and she took me under her baking wing, sharing her wisdom and fabulous award-winning recipes with me and all those lucky enough to befriend her.  I like to think of myself as a baker, but Marina is a pro, having won literally hundreds of ribbons for her baked goods and recipes over the years, and is also a field editor for Taste of Home.  This pie is one of the first recipes I ever made of hers, and I took all these pictures at that time–nearly three years ago now.  Since she gave me permission to share the recipe, I thought it was about time I did so! 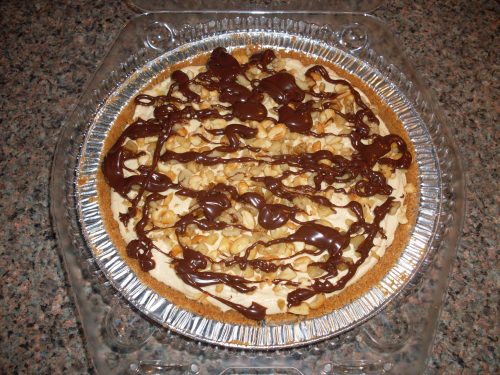 Marina has won a blue ribbon for this pie every year for the past 11 consecutive years, so that should give you an indication of how good it is.  I have to agree with the judges, because the creamy peanut butter filling is just to die for, and the cinnamon-scented graham cracker crust, chocolate drizzle, and crunchy nuts really puts it over the top.  The bonus is that it’s a chilled pie, and thus  a perfect treat to enjoy during these warmer months. 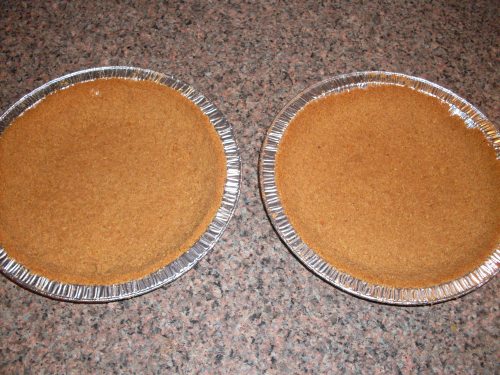 For the filling, in large bowl, beat cream cheese and sugar until fluffy. Beat in milk, peanut butter, and vanilla. 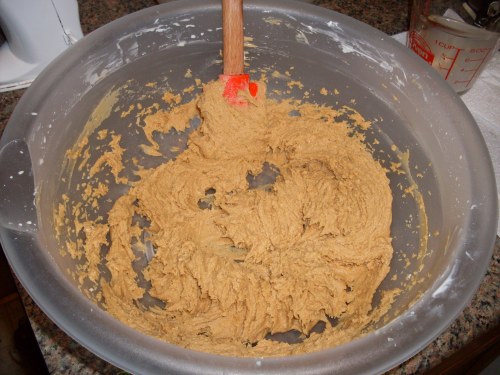 Fold in one third of it into peanut butter/cream cheese mixture. 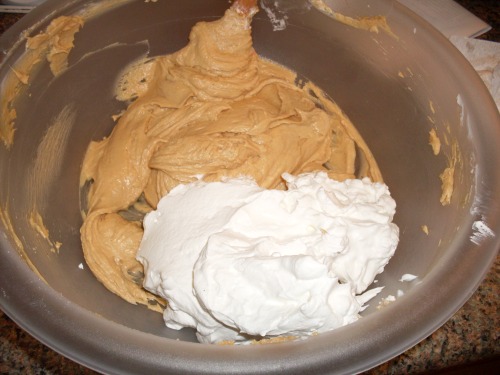 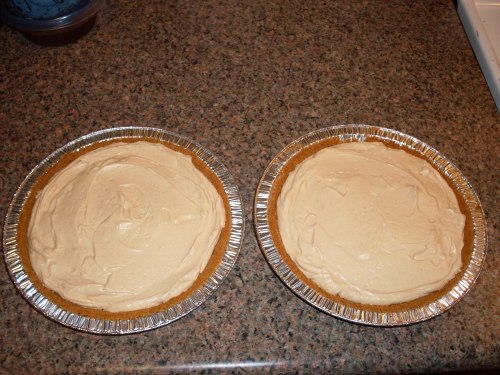 Give your nuts a good chop.

And sprinkle over the top and refrigerate overnight. 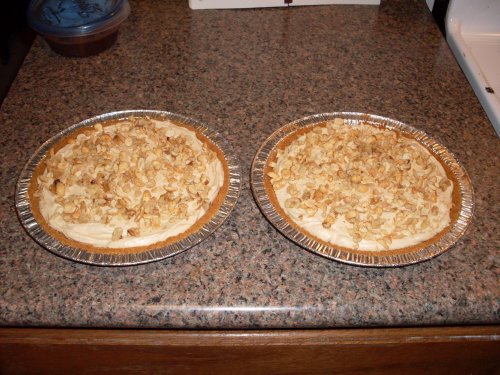 Drizzle hot fudge sauce or ganache over the top just before serving.  I went with ganache. 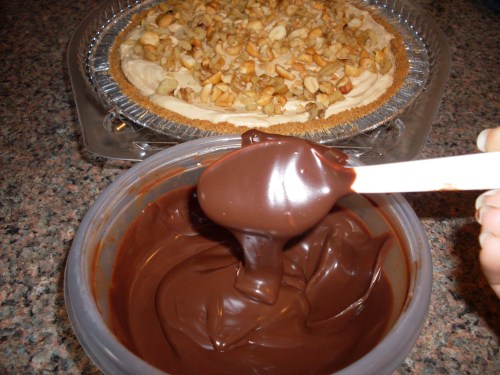 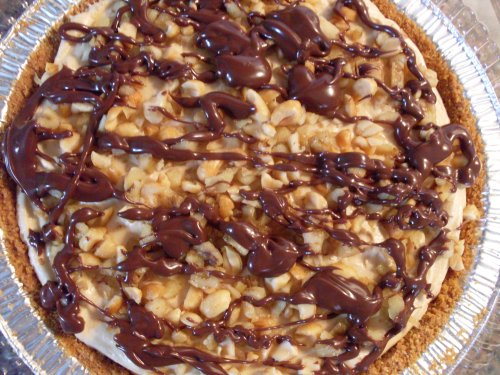 To make the ganache, place 4 ounces of semisweet chocolate chips in a heat-proof bowl; set aside. Heat 1/2 cup whipping cream until boiling and pour over the chocolate. 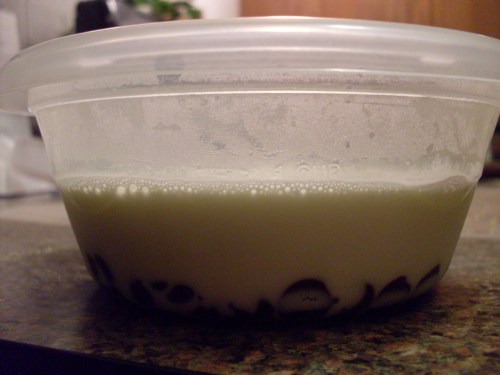 Let sit for a minute, then stir until mixture is smooth and shiny.

Allow to cool completely before using. It will get thicker as it stands, eventually becoming the consistency of frosting, and if it gets too thick you can heat it for just a few seconds in the microwave to make it liquid again. It liquefies very fast so you really shouldn’t need more than 5 seconds.

*Note: although the pictures show two pies, I did not double the recipe.  I used pie tins, which are smaller than a regular pie plate, and the recipe made a perfect amount to fill both tins.

Check out other recipes I’ve shared from Marina: