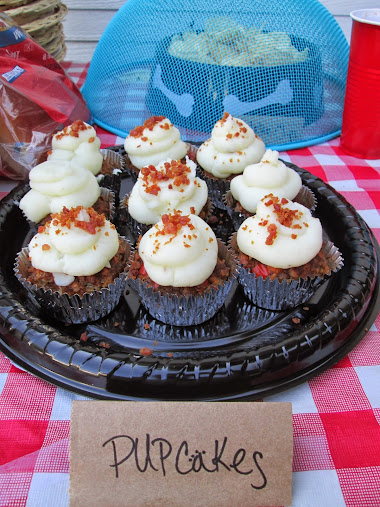 Jessie turned ten earlier this month and I decided that I was finally, finally, going to throw her the birthday party I’d always wanted to throw her ever since we got her.  I had invitations I meant to use for it so long I finally ended up selling them at our garage sale last year, thinking I would always have too much going on to actually do it.  Ironically, I ended up throwing her a birthday party the year I’m most busy, with a little human puppy taking up most of my time.  Just goes to show, you always have enough time for whatever you put your mind to. 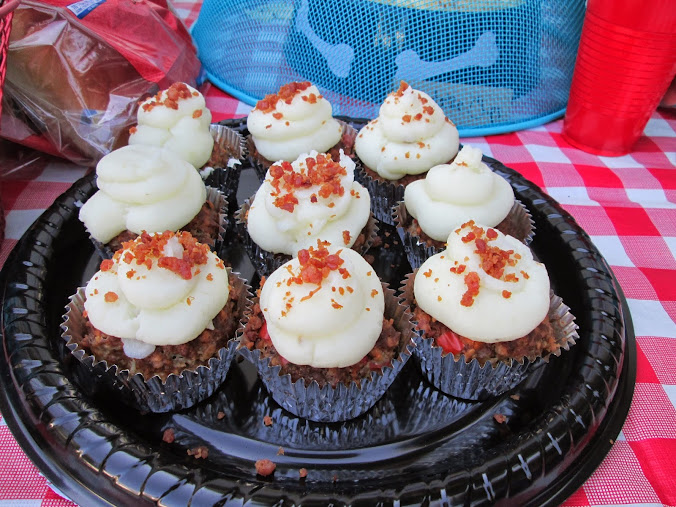 I plan to do a whole separate blog post about the party because it was the sauce, if I do say so myself, but first I wanted to share the recipe I made for the PupCakes.  Rather than make something flour-based, I decided I wanted to go with meat-centric PupCakes because, let’s get real here, it’s a rare dog that prefers a flour & fruit-based treat over a meaty one.  Jessie is alll about the meat. 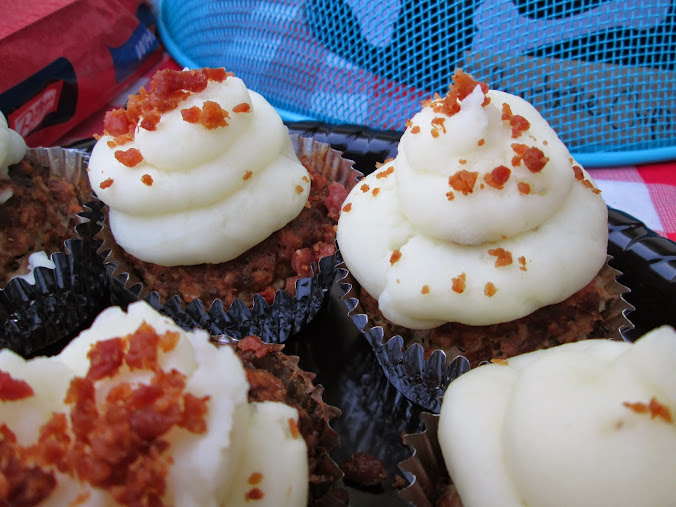 So I just threw together a bunch of stuff that seemed like it might make good dog-friendly (i.e. no onions) meatloaf into a bowl, mixed it up, and took a tiny taste test after baking.  Wow, I was impressed!  The only salt in the recipe comes from the ketchup, so I thought it would be rather bland, but these are so good I wished I’d made extra to enjoy along with the pups!  I added a mashed potato “frosting” that I thinned with yogurt.  So healthy and delicious, and the dogs devoured them! (Don’t be fooled by Doc giving up his to Jessie in the video, he’s so sweet that if Jessie even looks at him when he has a treat, he drops it so she can have it.  Kind of breaks my heart, actually! lol)  Even the little tiny dogs ate an entire PupCake by themselves. I’d say they are definitely dog-approved. :)

Remove ground beef from refrigerator to allow the chill to come off while you begin the recipe. Heat oven to 350°F. Line 9 muffin cups with foil liners; set aside.

Heat a skillet over medium-high heat. Add olive oil, red pepper, and zucchini, and sauté until softened, about 5-10 minutes. In large bowl, combine the cooked veggies with the remaining pupcake ingredients until well combined. Roll mixture into 9 large balls and place in prepared muffin cups.

Bake 35 to 40 minutes or until meat thermometer inserted in center of loaves reads 160ºF. Cool slightly in muffin cups.

While loaves are baking, cut potatoes into large chunks. Place in 3-quart saucepan, cover with water, and heat to boiling. Reduce heat; cook potatoes until fork-tender. Drain; return to saucepan. Add yogurt and beat with an electric mixer, adding milk as necessary, until creamy and smooth like frosting.

Place potatoes in a 10-inch decorating bag and snip the tip as large as you want it to come out. Alternatively, you can place them in a Ziploc bag and snip the corner. Remove the pupcakes from the muffin pan and place on serving plate. Starting at outside of each cake and in a circular motion, pipe potatoes onto each meat loaf. If desired, garnish with bacon bits. Serve warm or room temperature.

I have a kitchen addiction and love to collect & share recipes. My passion is baking but I love to cook as well. The only thing I don't like to do in the kitchen is wash dishes, but my husband generally does them for me in exchange for his dinner.
View all posts by Veronica »
← Tangy Pasta Salad
Jessie’s 10th Bruffday Paw-ty →