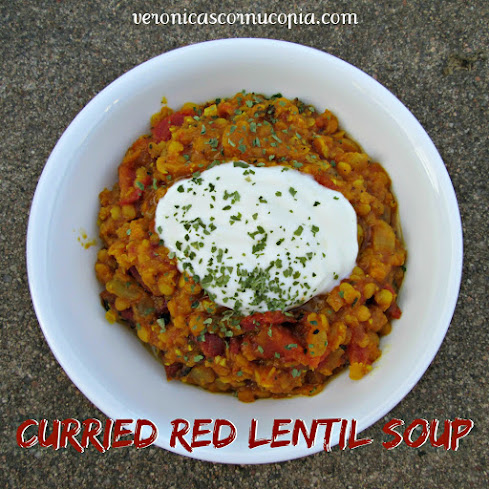 Yes, this really is a soup recipe, despite the thick chili-like images accompanying my post. This is what happens on day two to the soup, which I couldn’t photograph when it was still soup-like, because I made it at night and when I take photos of soup at night, I end up with freaky purple beans… 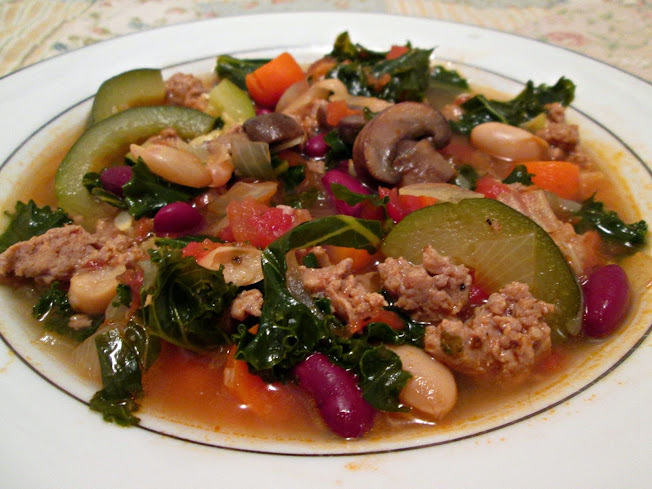 This chili-looking soup is so delicious, and easy enough that you can make it with an infant vying for your attention. Which is what I did last June. And I photographed it on the concrete rather than the grass (I’m all about simple backgrounds), because I knew I was going to blog it during the winter, and didn’t want the green grass to alert you guys that I’ve turned into a hot soup in summer person.  But now I’ve gone and told you anyway. Secrets can be so hard to keep. ;) 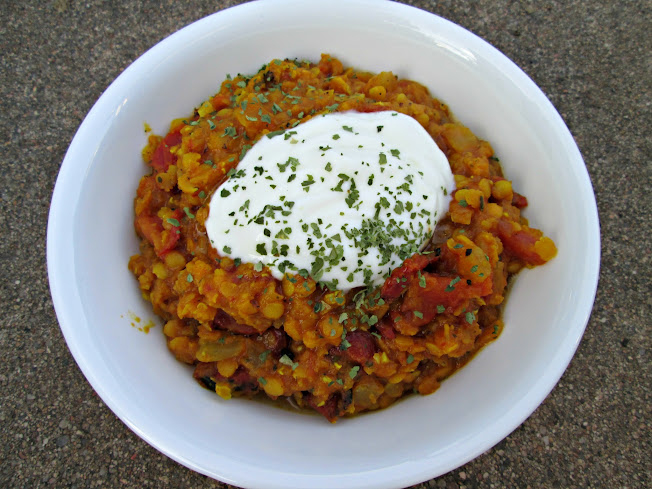 I used to detest hot soup in the summer, but it seems my pregnancy changed that permanently for me. I also continue to enjoy mustard more than ketchup, which is way cray. I never understood mustard people, and now I’m one of them. No one warned me that having a baby might make me join the mustard people for good. I still don’t know how I feel about this.

Anyway, this is a really good soup. And easy. And you should make it. 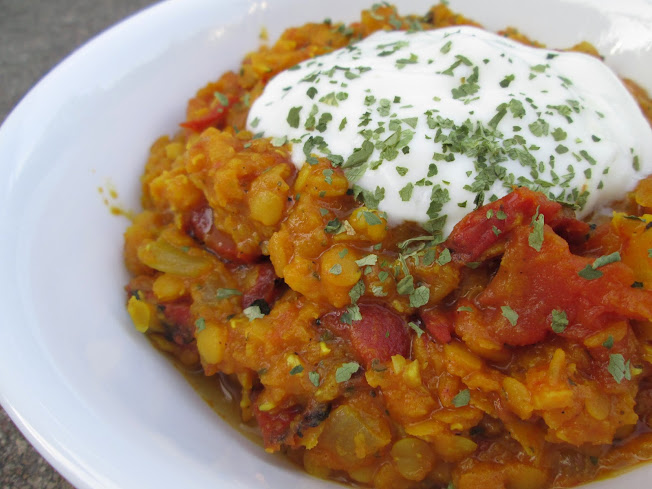 Microwave the lentils and 2 cups of broth about 8 minutes, until liquid is mostly absorbed.

Melt the butter in a large pot. Add the chopped onion and cook for 5 minutes, until softened, stirring occasionally and adding salt and pepper as it cooks. Add the garlic, ginger and curry powder, and stir for 30 seconds.

Add the microwaved lentil mixture to the pot along with the rest of the broth and the tomatoes. Simmer for 15 minutes. Taste and re-season as needed.

Serve the individual portions with a dollop of yogurt and a sprinkle of cilantro. Enjoy!

Bean Curry – really so good! I don’t know why I never remember to make my black eyed peas this way on New Years day, it’s one of the most delish ways to enjoy them.

Dal Makhani with Baked Saffron Rice – another goodie I nabbed from Jenna’s blog.

Lighter Chicken Tikka Masala – can’t tell you how many times I’ve made this one. One of my all-time favorites!

I know you expected a pregnancy update today but the weekend was so busy I forgot to have Den take a picture of me, and what is an update without a picture? Boring.  So I hopefully will have that tomorrow. In the meantime, here’s a soup recipe for you.  (P.S. Cookies in July swappers, I will be sending your matches later today!) 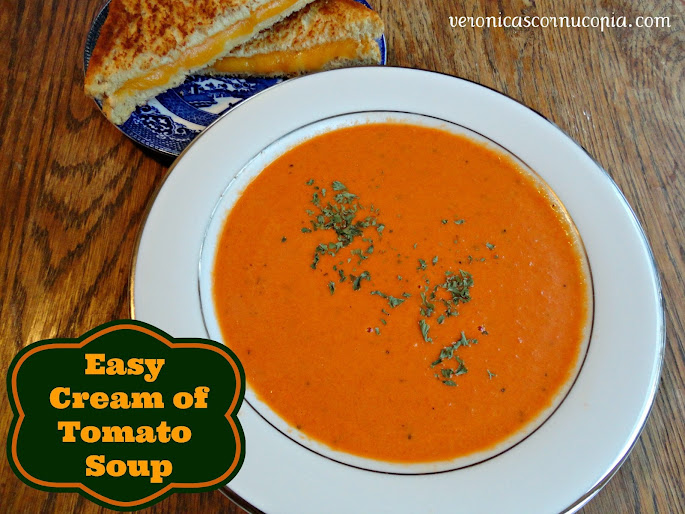 While I enjoy baking year-round, I try not to turn the oven on in the summer for dinner (I save it for more important stuff, like pie!) and lean toward simple stovetop meals like last week’s Easy-Peasy Cheesy Tuna Noodle Bowls, or grilled cheese with tomato soup.  I usually wouldn’t be eating hot soup in the summer, but baby is digging it lately and who am I to decline to deliver “womb service?”  I have a feeling I’m going to be turning on the oven for dinner if baby decides s/he needs some sort of casserole, too.

I’m not above heating up canned soup (I love the roasted red pepper and tomato soup in the cartons you can get at Aldi now!), but I came up with this recipe when I had a tomato soup emergency (i.e. I really needed it!) and no canned tomato soup, using ingredients I found in the cupboard and fridge.  Emergencies make the most delicious dinners sometimes! 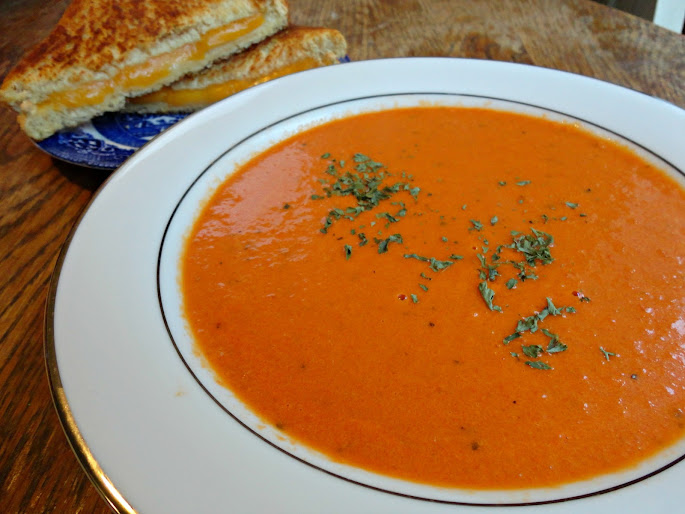 Combine all ingredients in a medium saucepan and heat to simmering. While heating, use an immersion blender to puree the mixture. Serve hot.

Much like the cinnamon roll sugar cookies, this was another recipe from Picky Palate that I had to make as soon as I read it.  Jenny based it off of the Chicken Green Chili soup that she recently enjoyed at Chili’s and says it tastes almost exactly the same.  I’ve never had it, but I can attest that her version is so fabulous that it officially took the number 1 spot on my “favorite soups” list.

I know it seems odd to post a soup recipe when the weather is finally warming up, but this is such a healthy and light recipe that it actually seems more spring-appropriate than fall or winter, when soups tend to get heartier, so I thought I’d better put it up now before it gets any warmer!

Read over the ingredients and imagine them combined and in your mouth–and then imagine it’s even better than what you imagined. Because it is.

2.  Serve soup with fresh diced avocado, shredded cheese and crushed chips if desired (I used whole chips to scoop the soup into my mouth–yum!).  If you can handle the heat, Jenny recommends squeezing some Siracha over top.

Veronica’s Notes: OK, I’m never prepared in advance. I had no rice already cooked and by the time I realized I needed cooked rice, my soup was all mixed and hot. So I just stirred in 1/3 cup of uncooked long grain white rice and brought the soup to a boil, reduced it to a simmer and cooked like 15 minutes (whatever it says on your rice package–that’s how long you’d cook it). This worked perfectly. I also only used 2 cartons of chicken broth and it was still more than plenty, even with the rice absorbing some of it.  Lastly, this soup isn’t spicy if eaten right after making it, but does have a nice kick the next day.

Thanks to Mel from My Kitchen Cafe for telling me how to include printable versions of my recipes on my blog!

If I sit too long at the computer desk, my right hand extended and clicking away, it gets so cold that I can make Dennis gasp by sneaking it under his shirt and tucking it under his arm (I love to do this). I’ve broken out my box of winter clothes in storage and swapped them for the summer clothes that were in my drawers.  (This is a habit I inherited from my mother, which comes in handy since we have a small house and don’t have room for even my meager amount of clothes.)

Do you know what these signs indicate?  Yup, it’s officially soup weather!

This one is delicious(!) & nutritious so you can’t go wrong with it.  I subbed butter beans for the northern white beans but I woudln’t recommend it.  Go with the northern.  And check out the original blog to see how beautiful this soup can look if you have a good camera, camera skills, are a better cook, and used the right kind of beans.

I’m compelled to explain that my broth is murky b/c I only had beef broth on hand, and the beans are hiding b/c I only used 1 can.  You can kind of see hints of them if you look hard enough.

Place the vegetables into the pan, adding more oil if needed and saute till the onions are translucent (about 10 minutes)

Add your sausage back in, then the beans, cabbage and chicken stock.

Add the bay leaf, salt, pepper, dash of thyme and some rosemary.

Bring to a boil, then reduce heat and simmer until the carrots are crisp-tender.  Stir in the spinach and cook until wilted, about 5 minutes.

Did you know that Campbell’s has a “Fiesta Nacho Condensed Soup?”  I didn’t, until I made my friend, Katy’s, mother’s tamale pie, which calls for it.  As soon as I tasted it, I knew I had to try it in other things to have some fun with it.

You know that slightly spicy cheese & tomato dip  (I think it’s made with Velveeta & Rotel) that people bring in crockpots to potlucks & serve with tortilla chips?  Well, that is what the soup reminds me of!  And at 120 calories/half cup–I can guarantee you it’s a calorie bargain compared to the Velveeta dip (you’d get less than half as much Velveeta dip for that many calories).

After making the tamale pie….

I bought a few more cans and made nacho appetizers (which we turned into a meal)….

As for the tamale pie, it was very good (everything was good, but this blog is about the pie so I’m concentrating on that).  It will definitely be a recurring meal at our dinner table.  I’m almost embarrassed to say it’s the best thing I’ve eaten in a few weeks b/c it’s so simple to prepare & doesn’t that sort of mean I’m a bad cook if I can’ t make something from scratch that tastes better?  Oh well, I don’t care!

Honestly, I don’t know if the best thing about it is how easy it is to make, how tasty it is, or that it’s Weight Watchers friendly.  That’s right, people!  You can have a big slice of beefy, cheesy, cornbread topped pie without feeling guilty!!!  Now how’s that for a winner?

1 lb. lean ground beef (I used bison, so mine was lower in cals than what is stated below)
1 pkg. taco seasoning (or 3 tablespoons homemade)
1 can Rotel tomatoes
1 can nacho cheese soup
1 can corn, drained
1 box of Jiffy corn bread
1 egg
1/2 cup milk (I used skim)

Brown meat & drain off any fat. Stir in taco seasoning, Rotel tomatoes, and can of corn.  Simmer for 15 minutes, stirring occasionally.  Pour into 13×9 baking dish that has been coated with cooking spray & spread nacho soup over the beef.  Mix Jiffy mix with the egg & milk & spread over the nacho cheese soup.  Bake at 425 until cornbread is brown on top, about 15 minutes.

Serve with a salad and you are good to go!!!  *Heads up to Moms: this dish is very kid friendly!

I made this again today, but this time added a cup each of quartered and sliced zucchini and yellow summer squash, along with a cup of diced onion.  This really bulked up the filling layer and it was no less tasty. There is no end of variations on this recipe, I’m sure–I think beans would be a wonderful addition or even replacement for the meat.