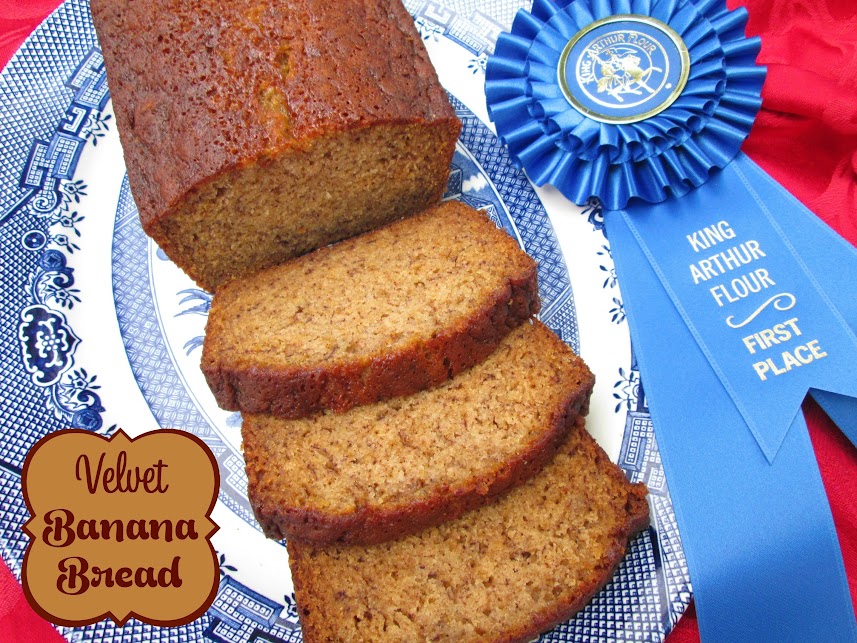 It all started in 2009 when I entered the foods competitions at the Kansas State Fair for the first time, and met a wonderful & talented woman named Colleen Woker.  We met while watching the pie judging and I asked her if she’d won any ribbons in the other competitions. She listed off approximately 241 things she’d placed in, including getting “Best in Show” for her banana bread, which as far as I understand means that her banana bread was so good, that the judges deemed it better than anything else submitted for judging in the foods competitions. I mean, it beat cakes!  CAKES! I was so impressed by her and in that moment, knew that some day I had to get myself a blue ribbon in the banana bread competition.  Little did I know it would become nearly an obsession.

In my quest to win a blue ribbon, I’ve made over fifty different banana bread recipes, and no matter how hard I tried to find the best, most perfect banana bread, the highest I ever placed was 3rd.  I really thought I was doomed to never get my blue ribbon, or even a red one.  This year I had no idea what recipe I was going to make until the day before the competition.  In fact, I had even forgotten to buy bananas in advance to let them get super duper ripe, and all I had was bananas that were still green at the stems.  Not acceptable! 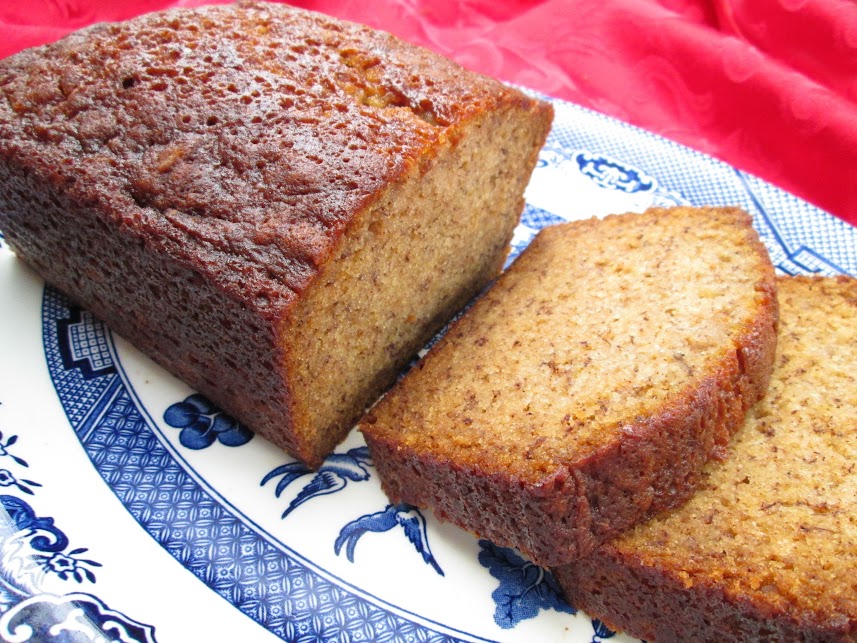 I posted a last minute plea on Facebook for rotten bananas and was given some by two wonderful women (thank you Lacey & Lisa!), enough to make a practice loaf or two if I could find the time.  I decided to take my best good friend, Jackie‘s, advice and replace the pumpkin in my most favoritest pumpkin bread recipe with bananas, which she has been doing for a year.  That recipe has 1/2 cup of water in it, which I’d never ever seen in all the banana bread recipes I’ve read in my search for the perfect one, and I was so scared to try it.  I asked her probably five times, “Do you really put the water in it when you make it? REALLY?” She assured me she did, and that it wasn’t wet or gummy, but really similar in texture to the pumpkin bread.  That sold me, because that soft texture is the ultimate for me in a quick bread. 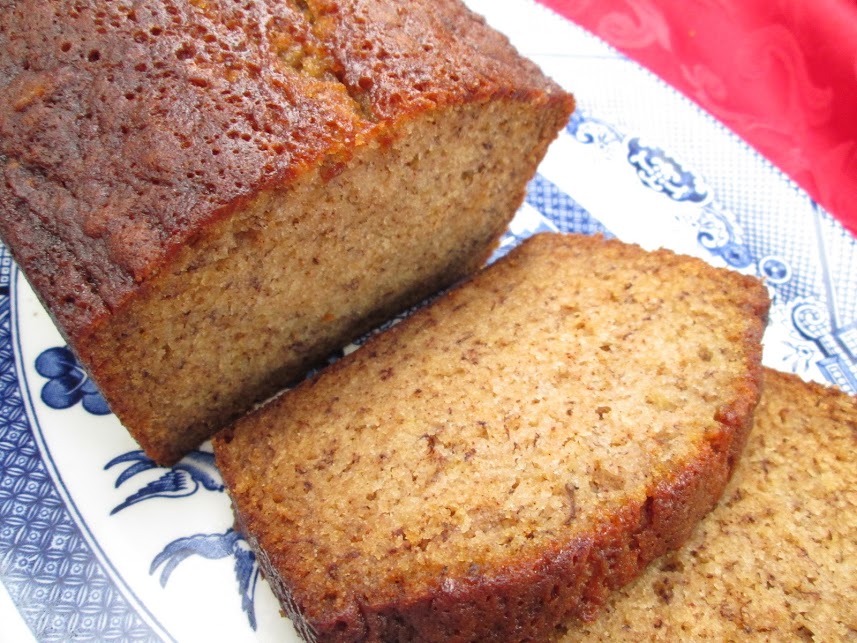 Despite my deep fears of including the water, and the temptation to replace it with something more exciting like milk or pineapple juice, I gave her idea a go, adding a touch of cardamom, and was absolutely floored by the result.  I had never in my life had such tender, soft banana bread.  And so delicious, sweet & perfectly banana-y with a the perfect balance of spices to set it off.  Unfortunately, it was one of the uglier loaves I’d ever made, and since 25% of the judging score was based on appearance, I lost all hope right there.  Because I knew it was too good not to submit, but also knew it was too ugly to win a blue ribbon. I just hoped it was good enough to win a red.

So many things went wrong in making the official loaf and my spirits sunk deeper and deeper with each obstacle. I kept questioning why I was even bothering.  This wasn’t the regular little banana bread competition, this one was sponsored by King Arthur Flour and the first place prize was a $150 gift card to their catalog, which is much bigger than the usual $9 prize.  This was a big deal, and more people would be entering than usual.  I didn’t have a chance! I was exhausted, would have loved to sleep in the next morning, didn’t want to waste the gas or the effort when I knew it was hopeless, but I’d been in the paper about the being the Banana Bread Queen Wannabe, and everyone on Facebook knew about it.  I had to go. 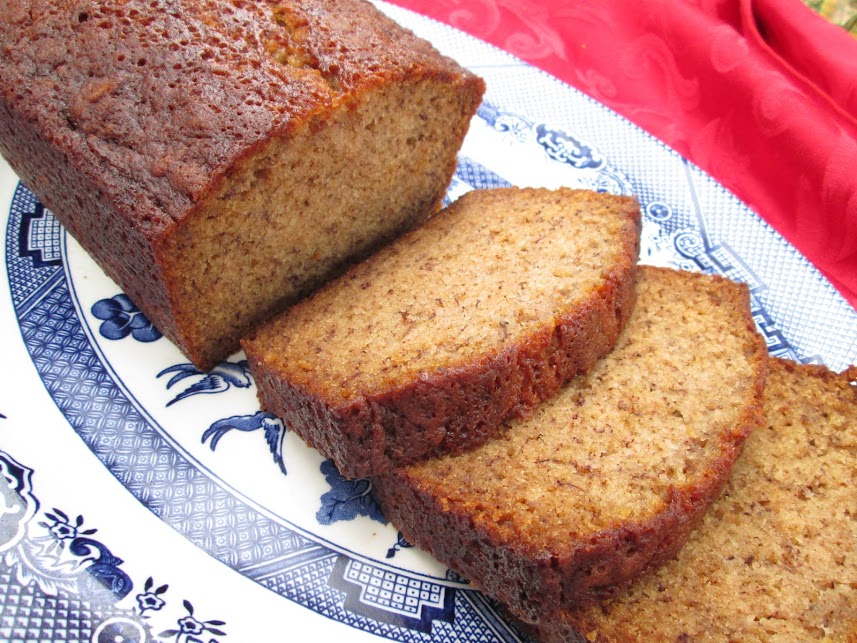 When I arrived to submit my bread, I noticed that everyone around me had loaves that were the same dark shiny brown, which I found unattractive.  That made me feel a little better, until I looked to see if any of my other three baked goods I’d already turned in had placed, and they hadn’t.  I knew it was going to be my very first no-ribbon year, and I went home defeated, knowing my quest might never end.

But when we returned to the fair as a family two days later, there it was. My ugly brown banana bread sitting front and center.  Next to a blue ribbon. 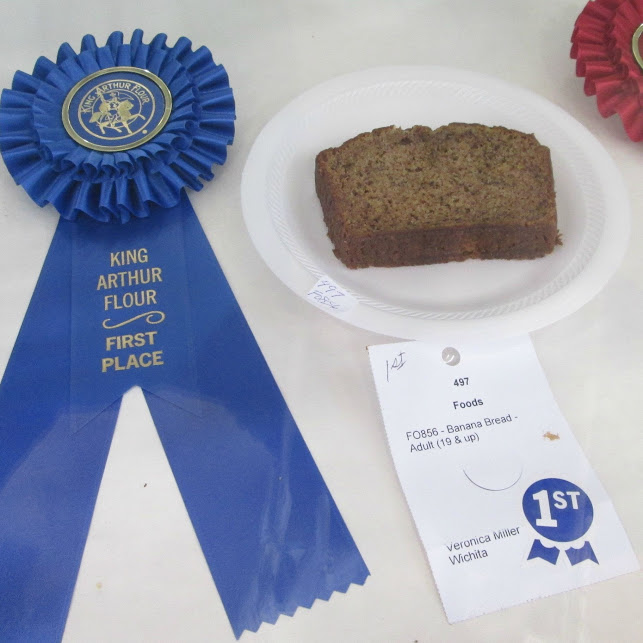 I squealed. I hopped around.  I squealed and hopped some more.  I think there was a lot of, “I can’t believe it!!”  I gushed my entire banana bread story to the poor couple standing nearby when my freak out started.  They were so happy for me, but everyone else looked pretty perturbed & disturbed by my antics.  I stopped myself several times from running up to random people to tell them I won.  Joshua was grinning and giggling, clearly trying to figure out what had Mom so excited.  I took his hands and we did a little celebration dance together.  When Dennis approached us (he’d been in the bathroom), I wanted to let him discover it on his own but I just couldn’t contain myself and as soon as I saw him I beamed and jumped up and down and waved him over, pointing wildly at the display case where my winning bread resided. He knew instantly of course what that meant, and he hopped up and down with me a little in celebration.  Joshua was so happy to see all the happiness and I was so happy, and Dennis was so happy, I thought all our heads might explode.

It took six years and countless loaves of banana bread, but I did it. The blue ribbon is MINE! Thanks be to God, to Jackie, Lisa, Lacey, and to Colleen for not entering the banana bread competition this year and giving me a chance.  And to everyone who has rooted for me all these years, thank you!!  My quest is complete and I couldn’t be happier to have found my very favorite recipe for banana bread and gotten the blue for it so that I never have to try another recipe again.  I’m so DONE with new banana bread recipes.  This one is definitely my new favorite, and I truly may never make another recipe again. 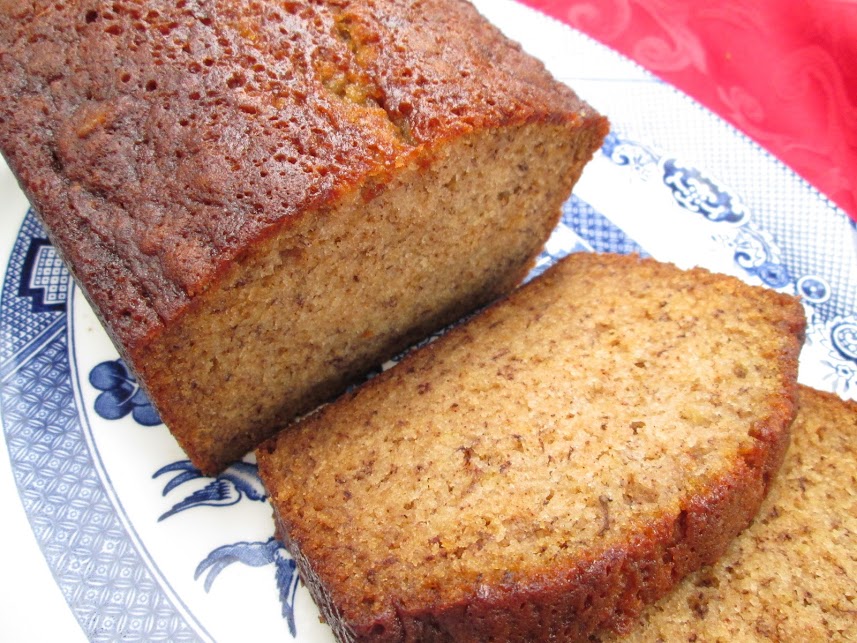 Preheat oven to 350F. In a large mixing bowl, combine banana, sugar, vegetable oil, water, and eggs. Whisk until well mixed. Measure the flour, baking soda, cinnamon, salt, baking powder, nutmeg, and cloves into a separate bowl and stir until combined. Slowly add the dry ingredients to the banana mixture, beating until smooth. Mixture will be very very thin and it’s OK to mix until no flour streaks remain, but if you see little lumps of flour that won’t mix out, don’t sweat it, they will dissolve while baking and overmixing will make this tender loaf tough and dry.

Spray the bottom of a 9×5 loaf pan and pour batter in (if your pan sticks, go ahead and grease the whole thing). Bake for 60-70 minutes or until a toothpick inserted in center comes out clean. Immediately remove from pan, and cool at least 15 minutes before slicing. Remove from pan immediately and allow to cool at least 15 minutes on a wire rack before slicing. Cool completely before wrapping leftovers in plastic wrap.

Veronica’s notes: If you aren’t measuring your ingredients on a scale, please use a very light hand when measuring the flour, spooning it gently into the cup and not packing it at all before leveling it.

Also, I only left the sides of my pan ungreased because the state fair judges have disqualified me in the past for greasing the whole pan. According to them, this is a baking sin and the sides of your bread will be much more tender if you grease only the bottom. This works fine with my new nifty galifty USA Loaf Pan because it’s crazy nonstick, but if you have any other not fabulously non-stick pan, you’d better go ahead and grease the sides. I honestly can’t tell a difference in the finished loaf whether the sides have been greased or not, the judges need to chill.

Speaking of loaf pans, be sure to use a large 9×5 as this is too much batter for an 8×4 loaf pan.  If you only have a small loaf pan, make some muffins with the extra batter, but don’t fill your pan more than 3/4 full.

Lastly, if you overbake your loaf a bit (I did on the one photographed, by a couple minutes because I was busy when the timer went off), don’t forget my water trick. It works on quick breads as well as cakes! Spray the sides and bottom well with water, don’t be shy with it, and it will all absorb while cooling and soften those hardened edges right up.

I have a kitchen addiction and love to collect & share recipes. My passion is baking but I love to cook as well. The only thing I don't like to do in the kitchen is wash dishes, but my husband generally does them for me in exchange for his dinner.
View all posts by Veronica »
← Supporting your infertile friends & The Stork OTC giveaway *CLOSED*
Thomas the Cupcake Train! →