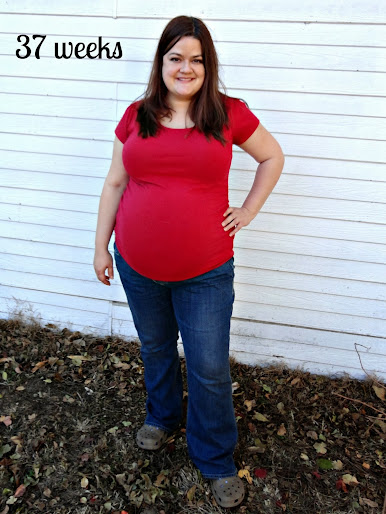 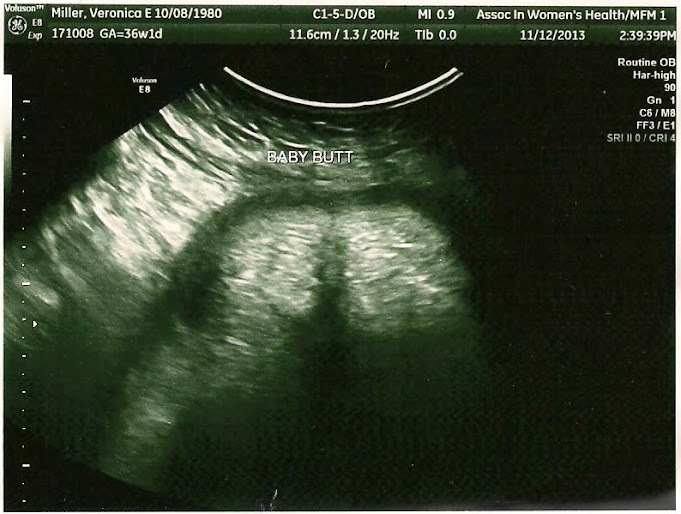 How cute is that tooshie?! :)  He’s weighing in at 6 lbs 12 oz (an estimation based on the sonogram), which is in the 80th percentile for his gestation, but otherwise measuring right on schedule.  My doctor was happy with how normal everything is, as he was expecting a larger baby (can they really get larger than this at 36 weeks? Yipes!) with more fluid because of my diabetes but everything pretty much looks like it would if I wasn’t diabetic, though he  might not be as large. He’s not pushing me to induce early, at least not yet.  I really would prefer to let this baby come in his own time if possible (I think God knew what he was doing when he gave women a 40 week pregnancy-lol), so I’m OK with that, but the good news is that I’m finally feeling (almost) ready for him if something happens or I have to be induced. 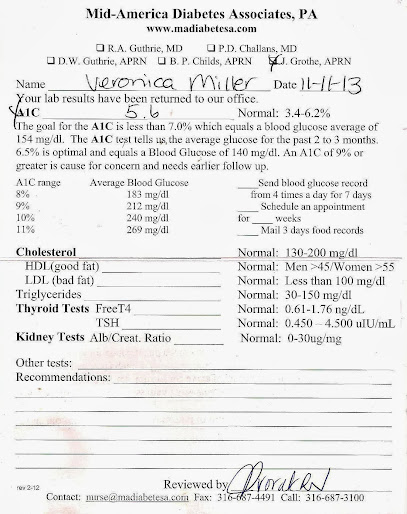 Speaking of my diabetes, I had another A1C test (a test that determines your average blood sugar for the past 3 months) and it was 5.6, which translates to an average blood sugar of about 111 (90-100 is normal) and last time it was 5.5, so I’m still rockin’ it!  Before pregnancy, my lowest A1C was 6 but usually closer to 7, so I’ve really stepped it up for baby’s sake.  I really didn’t think I could lower my A1C like I have because I hate the low blood sugars that come with trying to keep them at a normal level, so I’m pretty proud of myself! It hasn’t been easy, though, because you need so much more insulin when pregnant and I have to adjust it and increase it almost constantly.  I know this won’t mean much to non-diabetics, but if you’re familiar with insulin, it might shock you to know I have gone from 48 units (long and short acting combined) to 140 units a day now.  Yipes! 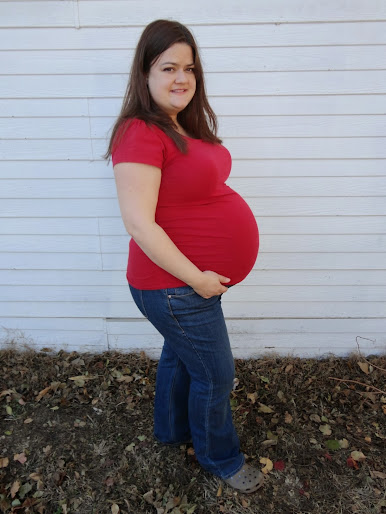 After last Monday’s post about my worries, this week has been a balm to my soul.  Not only because of your comments and my Mother-in-law’s reassurance (bless her!), but mostly because of Joshua himself.  It’s hard to explain, I just feel like I’ve bonded even more with him the last week (I think it really helped to see a brief glimpse of his face during the sonogram – it was so fat and sweet I just can’t wait to kiss those fat cheeks now!), to the point that I’m looking forward to meeting him more than I want to keep him inside.  Not that I’m eager for labor and delivery, just more ready for it. 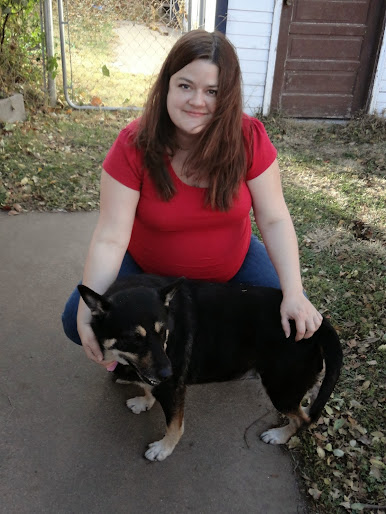 And a cute thing I have to tell you about Jessie!  This girl hasn’t wanted to let me out of her sight the last couple weeks.  Remember the way she was looking at me in my week 36 photo? I think she knows it’s getting close to the end.  She will not let Daddy take her on a walk without Mama now, although she used to without a problem.  She doesn’t want to leave me at home alone!  Too bad she doesn’t realize that when I try to stay home, it’s because I really need to rest.  And I can’t go on a full hour-long walk any more (too painful in the hips/pelvis and back), but if I try to go turn around without her noticing, about five minutes later she’ll catch up, pulling her Daddy behind her.  And then yesterday she sniffed all over my belly, which she has never done before, and I looked at Dennis and said, “She better not be sensing impending labor.  You’re not allowed to sense that for at least another week, Jessie.” I haven’t packed my hospital bag yet!  #1 on my to-do list for this week. 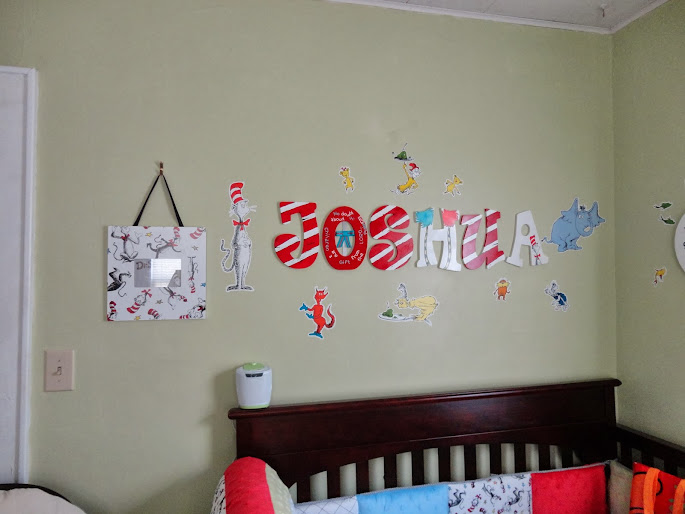 The nursery has been modified a bit with some of the wonderful gifts we’ve received from my showers.  We hung the Joshua letters that Andrea painted, along with two picture frames we got from Jill through Joan’s Aunt Shower.  Do you love it?  Oh and the thing on the crib is a sound machine (lullabies, ocean, heartbeat, etc.) that also projects images onto the ceiling that go round in a circle for the baby to watch – it’s so rad. 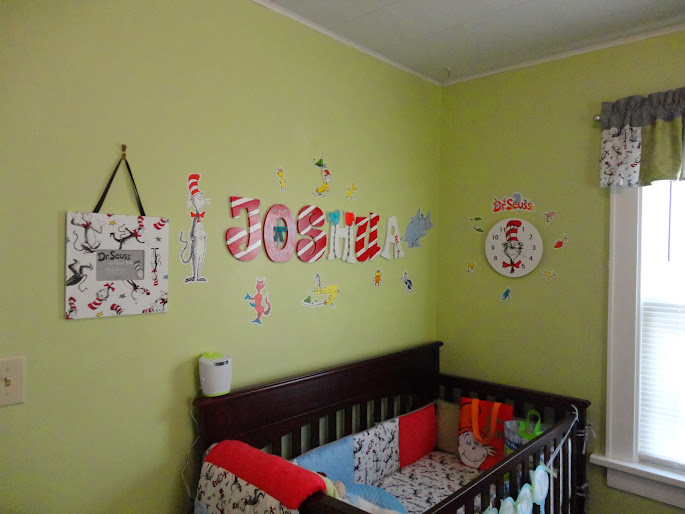 Momma D had to come over to help me situate all the decals after Dennis and I removed them to make room for the letters.  I just couldn’t do it – I knew it would just be all wrong if I did because they were so perfect before! So she came and saved the day.  And brought something else with her… 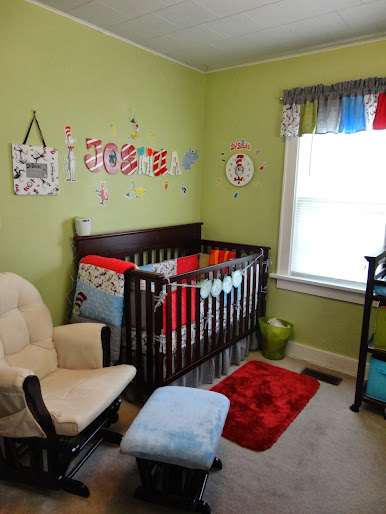 Check out the red rug on the floor! Really helps tie the room together to have the splash of red down there.  I’d been planning to buy one myself, so that’s one less thing. Wahoo! 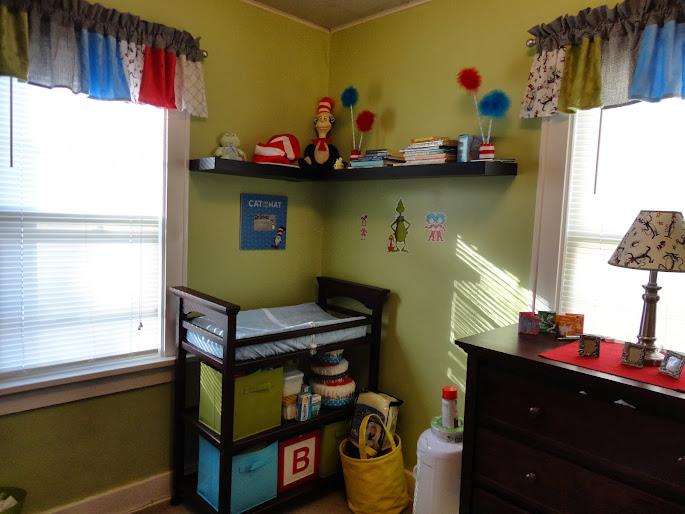 You can see more changes in this corner, with the second picture frame (the frames were gifts from the Aunt Shower from Joan’s friend, Jill), a diaper cake also from the aunt shower (I can’t bear to take it apart, but do plan to use the diapers–check out the aunt shower post to get a better look at it in all its glory), cloth baskets to organize the changing table from Phyllis, my MIL, a toy bag we’ve already filled (though some of them are my toys-lol), and a block box (also filled with toys & teethers).  You might recognize the truffula trees on the bookshelf from my Dr. Seuss shower! 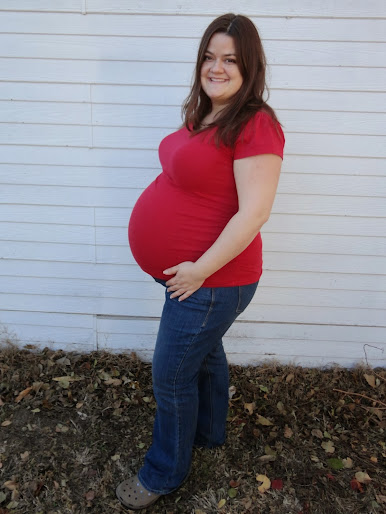 Having the nursery almost completely finished helps me feel a lot more ready for Joshua.  I didn’t realize it, but knowing there was so much to be done in there was actually stressful and it wasn’t until the decals were up again that I felt relief.  Dennis still needs to fix the bookshelves and we have one more picture to hang, but it’s at a point where it feels done enough that I won’t freak out about it if I have to put a baby in the room with only those things left to do.  The room being ready helps me feel ready too.

Now to get the rest of the house ready.  As my friend Stephanie said she felt about her own home when she brought her new baby into it, it suddenly feels like a baby death trap! LOL!  It’s actually not too bad, just as long as we confront it we can have it ready in a week.  But there’s so much to do!  I gotta mail my cookie swap cookies, make friendship fruit cakes (my fruit was ready yesterday after the month-long process, but I didn’t have the time or ingredients yet) and freeze them so I have some Christmas goodies even if I don’t have time to bake after Joshua comes, update my pregnancy journal (because I know I won’t have time once Joshua’s here and I don’t want to forget my pregnancy before I have the chance to record everything for him…and me), make cupcakes for an order I have this week (I don’t talk about my cupcaking any more, but I’ve been doing it all along), and let’s not forget that all important hospital bag.  Plus I want make these and have them in the freezer for when I get home from the hospital, and I don’t even have aloe vera or witch hazel yet.  Or even groceries – I gotta go grocery shopping. And get gas.  Oh yeah, and work 40 hours and go to two doctor appointments.

I have a kitchen addiction and love to collect & share recipes. My passion is baking but I love to cook as well. The only thing I don't like to do in the kitchen is wash dishes, but my husband generally does them for me in exchange for his dinner.
View all posts by Veronica »
← Dr. Seuss Shower #2
Garlic & Chive Pumpkin Cheese Ball →