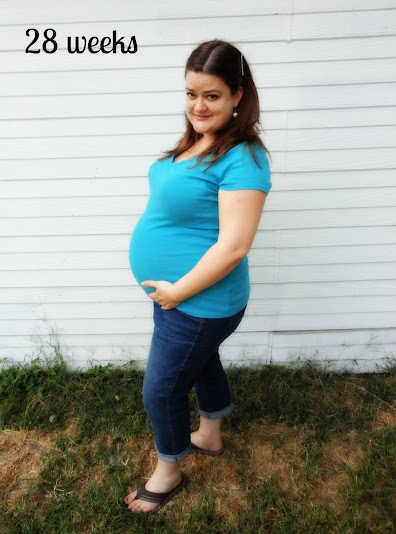 We started outside for this week’s pics, but even in the shade I couldn’t help squinting (this is as close to not squinting as I could get – lol) so this effort didn’t last long.

No, I didn’t just suddenly grow an ego the size of my belly.  I’m literally hot, and have been my entire pregnancy. I sweat while people around me seem fine.  I can’t imagine how much worse it would be if I was 9 months pregnant during the summer – props to the women who have to go through that.  I just hope the cooler fall weather isn’t delayed this year because I’m really just done with all the sweating. 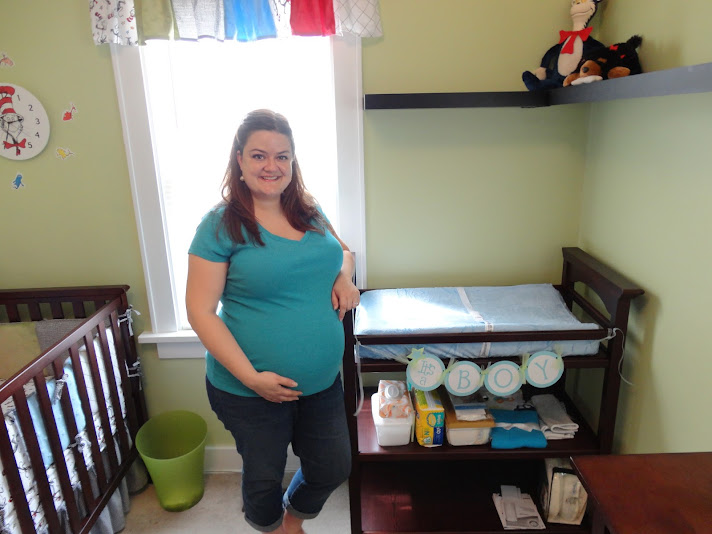 This banner was given to me by some friends at church so I had to show it off. It’s hand made and so cute!

In addition to being hotter than all y’all, I’m also having twins.  Or so everyone seems to think.  I kid you not, three people asked me in the last week if I’m sure I’m not having twins.  Really?  I actually don’t personally take offense to this question because I know and admit that I’m huge and have no problem with it (right now, anyway), but what sane person would ask a hormonal pregnant woman a question that reminds her how enormous she is?  I haven’t had much problem with being emotional, but if I were prone to it like many pregnant women are, I think I’d probably start slapping people when they asked me this to knock some sense into them.  I think pregnant women aren’t the only ones who have side effects from their pregnancies – it seems to make people around them stupid too! LOL!  A friend just sent me a link to 28 things you should never say to a pregnant woman, and it has suggestions for what to say instead. Very helpful and a quick read if you want to check it out. 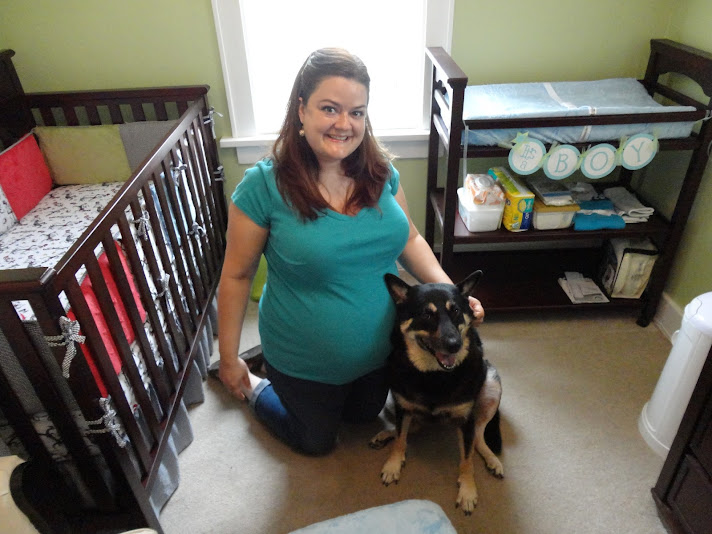 Jessie joined us in the nursery and I decided we needed a pic with Joshua’s big sister in it! :)

Not much new to report, except that I think Joshua might share his Dad’s fondness for martial arts because I swear he has taken to doing Tai Chi in my belly.  Sometimes he’ll move soooooo slooooooow, but with a lot of pressure, and it feels totally weird, and not really in a good way.  I’m already to that point where I need to stretch to give him more room sometimes because it’s uncomfortable.  Scary to think how cramped his quarters will be near the end if I’m already stretching out to give him room!  My Mom said she was so big she couldn’t reach the front of her belly and I’m hoping that’s because she has stumpy arms (she’s even shorter than  me, probably just over 5′) and not because her belly was really that huge.  I mean I’d have to be carrying a baby whale to be so big that I couldn’t reach the front of my belly! lol. 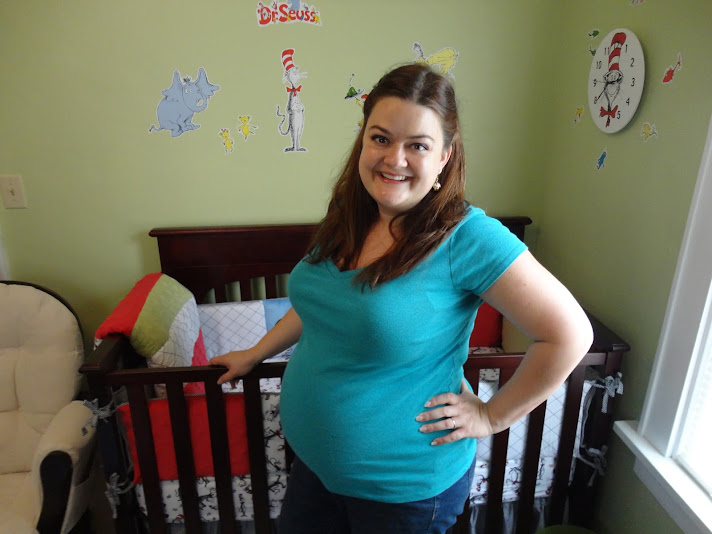 And the swelling/water retention continues.  I can see it in my hand in the above pic – my fingers aren’t usually so plump, and I’ve had to switch to a ring I used to wear on my middle finger for my wedding ring because it’s too tight.  And before you ask, my blood pressure is still OK, thankfully.  Last week it was 116/68, which is higher than the last visit, but about what it was at my very first visit.  Brace yourself or scroll quickly downward with your eyes closed because I’m going to show you how bad my feet can get and it ain’t pretty (the indentations are from sandals I wore all day that are usually really loose on me). 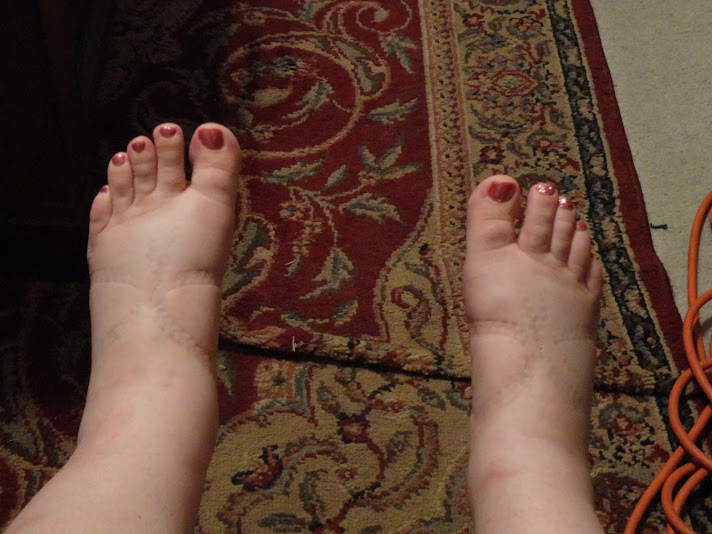 Sorry.  Hope you don’t mind me keepin’ it real.  It doesn’t cause any pain, just ugly to look at.  My feet do tire easily, but I have a wonderful man that will rub them any time I ask, and that helps so much.  God bless him!  <3  And just to leave you with something cute, here’s a random picture I took of a smiling Jessie girl, which was photo bombed by my belly. 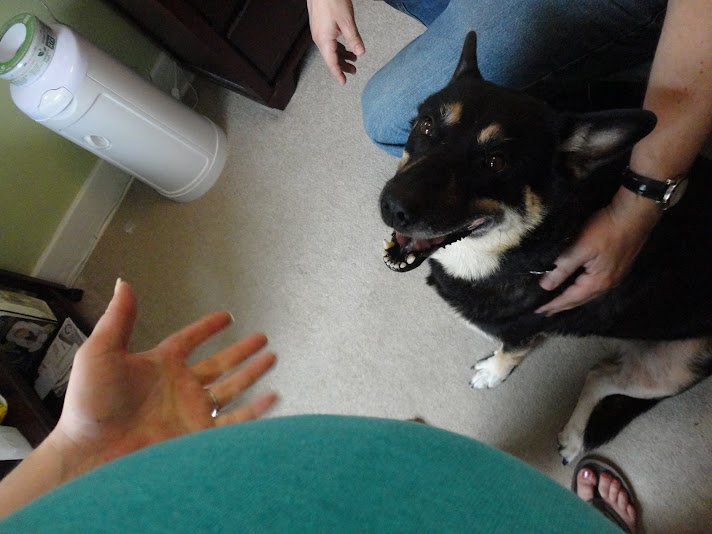 One last thing – I just want to give some love to my friend, Stacy, who was diagnosed with Lyme disease a few months ago, along with her youngest son (though the other two also show symptoms as well).  She has apparently lived with it most her life and just thought that the migraines and pain were her normal, only to find out much later that there’s a reason for her and her son’s multiple problems.  The treatment, however, has been tricky, and a lot of trial and error has gone into finding things that work without taking away her ability to function as a human being.  She has a blog, DoingLifeWithLyme, where you can follow her journey to recovery if you have a personal interest in Lyme disease and treatments for it.  She is currently using both antibiotics and essential oils and getting really good results with the oils, so if you or anyone you know suffers from this disease, you might want to check it out!

I have a kitchen addiction and love to collect & share recipes. My passion is baking but I love to cook as well. The only thing I don't like to do in the kitchen is wash dishes, but my husband generally does them for me in exchange for his dinner.
View all posts by Veronica »
← Creamy Green Chile Chicken Enchilada Casserole
A photo session with a reluctant dog →