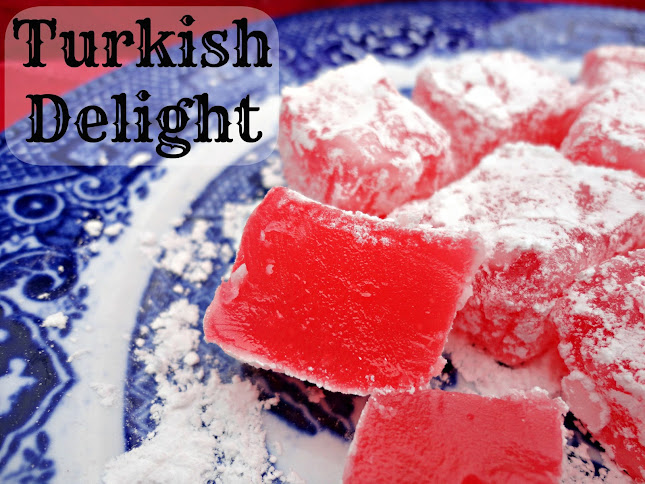 Turkish Delight is perhaps the recipe I’ve been wanting to make longer than any other, for  over twenty years!  I’ve wanted to try it ever since I was in elementary school and read about the Turkish Delight which the witch seduced Edward with in The Lion, The Witch, and The Wardrobe.  It just sounded so delicious!  Dennis also told me years ago that he also has wanted to try Turkish Delight ever since reading the book.  So this year I decided to make it for him for Valentine’s Day, and to send it to my matches for The Sweetest Swap as well. 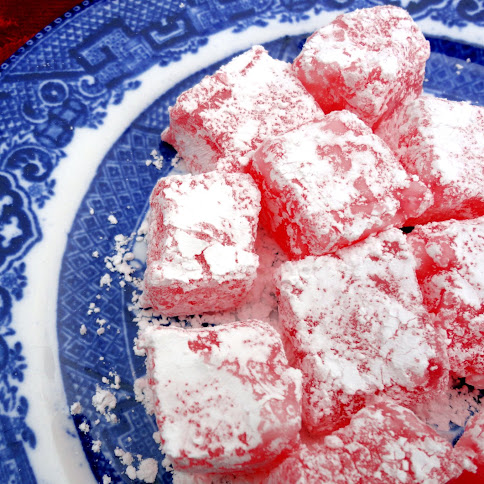 I decided to go with the traditional recipe, which doesn’t include gelatin and takes quite a long time to make.  But the texture is worth the effort!  I took my recipe and method from Titli’s video, and I tell you this woman is mad, but I love her.  You have to watch a few of her videos to start jiving with her craziness.  Anyway, we discovered that we quite liked Turkish Delight, especially the nice soft, chewy texture.  It’s similar to a jelly candy but really so much softer that it’s not really jelly-like at all, it’s just the closest thing I can compare it to. And so smooth!  The flavor is very nice, bright from the lemon juice, and mysterious & romantic from the rose water.  While the rose water is nice, I think I would like this a lot better using lemon extract and would suggest it if you don’t have the rose water, but cutting the amount down to maybe a teaspoon (or to taste) since it’s much stronger than rose water. 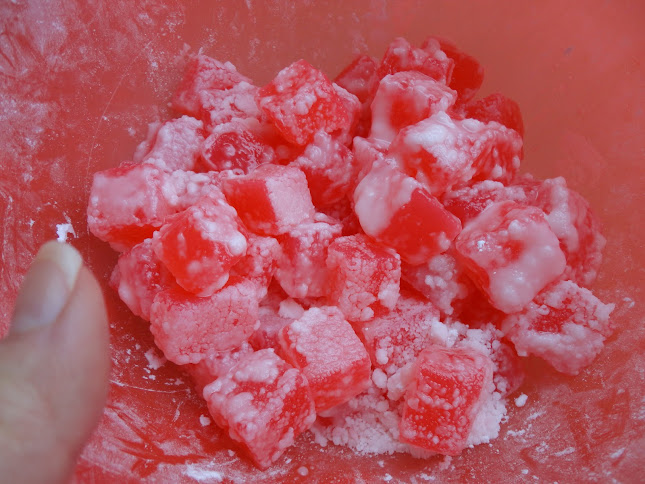 The downside is that they tend to weep.  You should store them packed in the extra powdered sugar, but even so, after only a day mine were pretty much a mess.  I wish I’d taken photos right away because right after cutting and dredging in powdered sugar, they were so pretty with such smooth surfaces.  Instead I took my photos two days later when the bowl had turned into  the nastiness above. :( I had to cut off the worst of the edges and then roll them in fresh powdered sugar for my photos, but believe me they are so much prettier the first day!  I asked Titli if this was normal and she said it was likely our damp weather to blame, but even so, hers start weeping after four days.  Her cure for the weeping?  “Eat them quickly!” lol 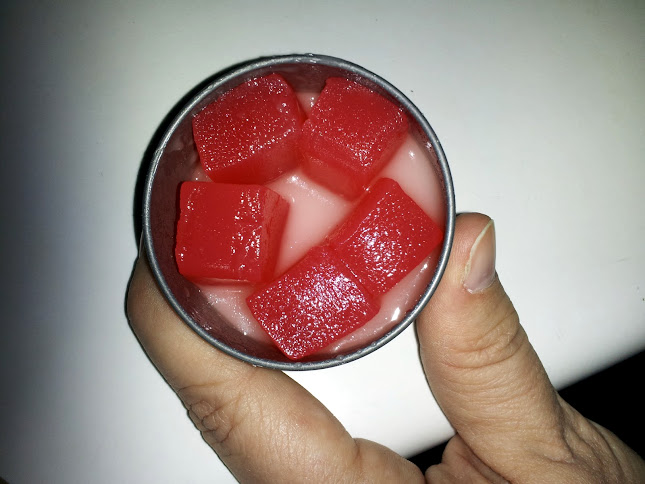 This is what my poor swappees received (along with a dozen oatmeal candies–thank goodness I sent enough of those to make up for the Turkish Delight mess!)–photo courtesy of Shesten M.

If I haven’t scared you off with my cautionary photos, here’s the recipe!  Just be sure to make this when you’re enjoying a spell of dry weather and perhaps when you have enough company to polish them off within a few days. 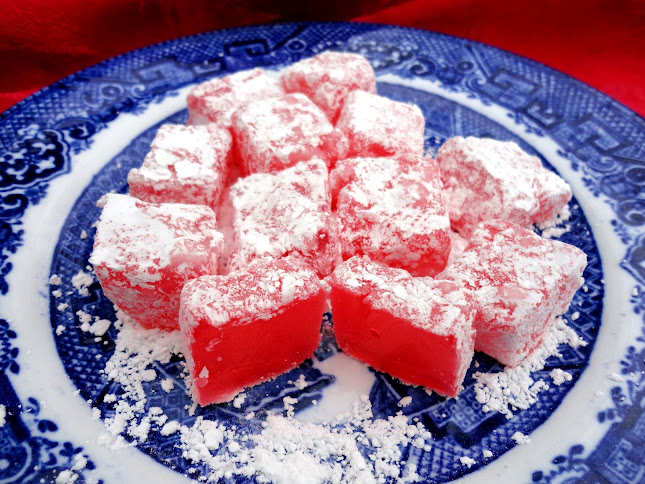 Note: I followed the gram measurements for this recipe, using my kitchen scale.

In a medium saucepan, combine 1 ½ cups of the water, the lemon juice, and sugar. Bring to a boil while stirring and continue to cook over medium heat, stirring frequently, until the mixture reaches 115C (soft ball stage). Remove from heat and set aside.

In a large saucepan, combine the remaining 2 cups water, the cream of tartar, and the cornstarch. Bring to a boil, using an electric mixer to beat it on low speed the entire time. It will get thick quite quickly. It will be very milky and opaque in the beginning, but will get more clearish. Once it is a thick gluey paste and turns more and more clear, add in a little of the sugar syrup and beat with the mixer until blended. Scrape down the sides of the pan, and add a bit more at a time, beating well after each addition until smooth. When all the syrup is added, it will be thick but fluid. Turn on the heat again and bring to a gentle boil. Turn heat to low and simmer very, very gently for about an hour, stirring frequently (I stirred every 1-3 minutes). It will turn a light golden brown color. Add in the rosewater and food coloring if desired, and mix well.

Pour into prepared pan and shake the pan to make sure the mixture reaches all the corners. Allow to sit at room temperature until set, about 3-5 hours, or overnight.

Combine the powdered sugar and cornstarch for dusting and sift them together into a large bowl. Sift some on top of the pan of Turkish Delight. Sift some over a surface, then turn the Turkish Delight upside down onto prepared surface. Carefully remove the paper and sift some sugar over the top. Using a sharp knife or pizza cutter, cut the Turkish Delight into small squares. Put the squares into the bowl of sugar and toss them around every so often. Once all are added, toss them around really well to make sure they are well coated with the sugar/cornstarch mixture.

To store, place Turkish Delight in a container with an airtight lid, and pour the sugar/cornstarch mixture over the top to keep them from weeping or sticking together.

The swap went very smoothly and I was lucky enough to get 6 packages in the mail!  They disappeared all too quickly… 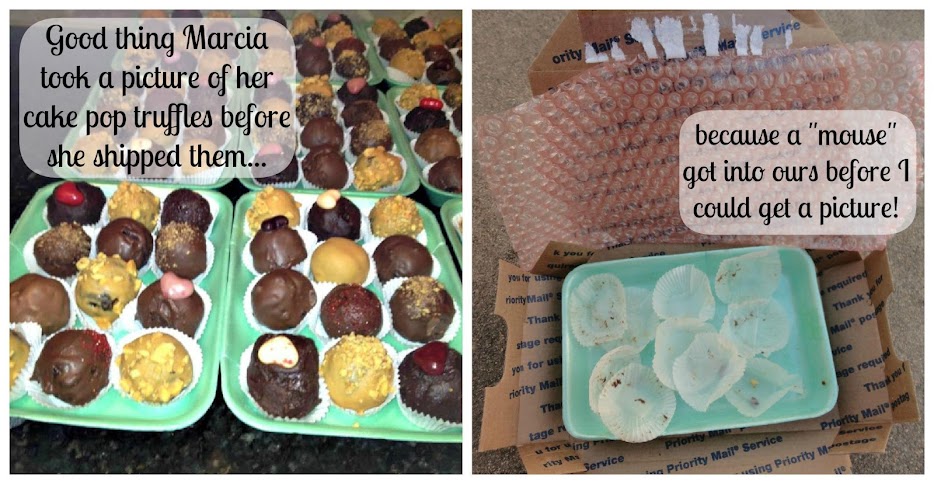 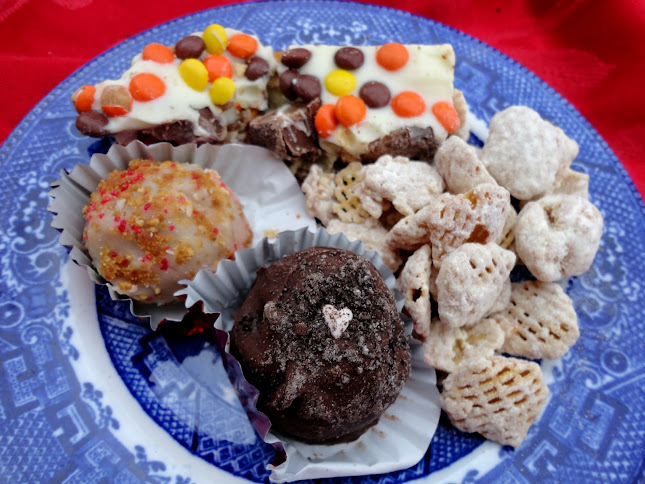 Oreo & Biscoff Truffles from Shania, Lemon Muddy Buddies and Pretzel Caramel Bark from Lynn.  Dennis ate all the Oreo Truffles by the time I got home, so I’m glad I got one before I left for work! I enjoyed the Biscoff Truffles all to myself, which was fine by me because I liked them even better.  Lynn wasn’t a match of mine, but she was kind enough to send me two packages! One stuffed with the Lemon Muddy Buddies (YUM!) and another with the Pretzel Caramel Bark (love salty and sweet!).  Thank you ladies! 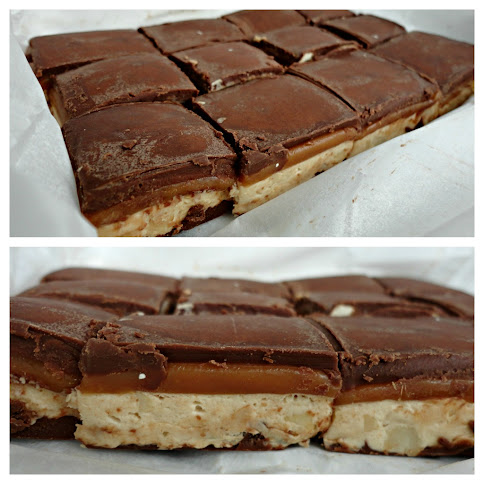 Snickers Bars from Laurie.  Wow!  Talk about impressive.  These were every bit as good as they look and I had trouble saving any for Haus.  I had to beg him to hurry up and eat some before I ate the whole package. LOL! 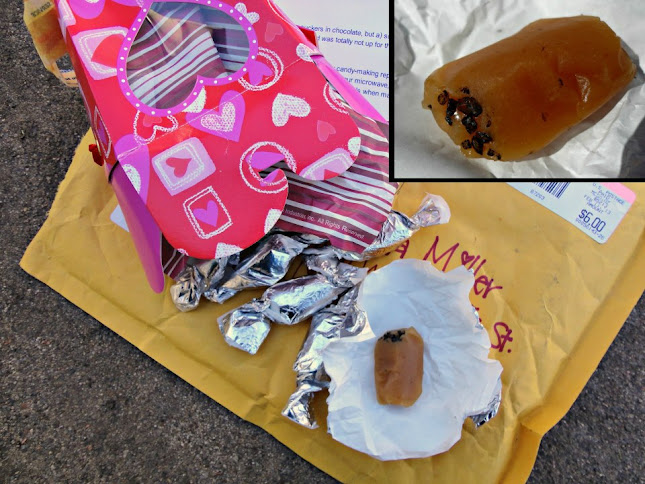 Vanilla Sea Salt Caramels from Shesten (that’s Hawaiian Black Lava Sea Salt on them). Oh so incredible.  These I ate one after another until they were all gone, in just a matter of minutes.  Poor Haus.  Poor me! I need a refill, Shesten. ;)

In total, 1,275 candies were exchanged through our swap, and because swapper Marcia L. registered us with Cookies for Kids Cancer, Barmioli Rocco matched $1 for each and we raised another $1,275 for pediatric cancer research just by doing what we love to do.  And I’m also very glad to report that we had zero flakes for this swap!  Every single person sent out their candies.  These swaps just keep getting better.  Thank you to all who participated, I had a ball.

I have a kitchen addiction and love to collect & share recipes. My passion is baking but I love to cook as well. The only thing I don't like to do in the kitchen is wash dishes, but my husband generally does them for me in exchange for his dinner.
View all posts by Veronica »
← Key Lime Pie
Thankful Thursday #102: I’m alive! →