As you may recall, I’ve been working on perfecting my banana bread recipe for next year’s state fair competition.  I’m on a personal mission to beat a certain lady whose banana bread has won first place for the last three years I’ve participated.  I’m not sure if it’s even possible, because she seems to have magical baking powers, judging by how many ribbons she wins each year.  But if I lose this year, it’s not because I didn’t try.

So far I’ve made seven recipes and have frozen a piece from each loaf so that by the time I feel that I’ve got a winner, I can do a taste-test comparison to make sure.  My husband and his co-workers (they’re my judges) all told me to stop after loaf number three, and they keep telling me that none of the loaves since that one have been as good, but I have to make sure I’ve really got the BEST one.  So I soldier on. 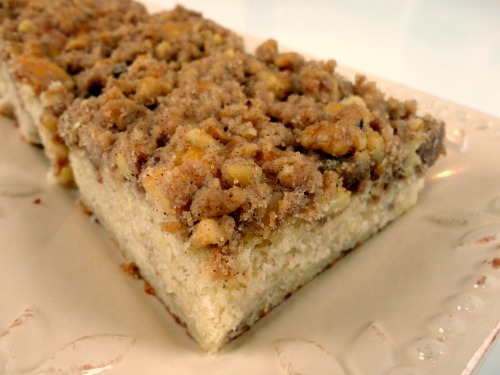 So what does my banana bread quest have to do with this coffee cake?  Well, it was actually inspired by the most recent banana bread I made. The bread version did not turn out as I had hoped, but this cake is utterly perfect.  The winning loaf of banana bread was one that I added cardamom to on a whim, and I figured that adding all the chai spices to it would make it even better.  I keep trying it in different ways, the latest with a chai streusel, but for some reason it’s never as good as the cardamom alone.  It’s giving me a twitch.  I really don’t want to submit a bread called “cardamom banana bread,” when I could submit “chai banana bread,” which sounds so much cooler!

Anyway, after making the chai streusel banana bread, which was good but not knock-your-socks-off, I still had three over-ripe bananas waiting to be used and I was just tired of reinventing my banana bread.  I had to do something else with those bananas.  I happened to get an email notification for a contest for new Amish Friendship Bread recipes at the same time my bananas were screaming to be used, so I defrosted one of the Amish Friendship Bread starters I saved months ago, and created this coffee cake with it.  I’m really hoping to get that $75 Amazon gift card with this one! :)

This is one delicious coffee cake, people.  I really love the flavor of the banana cake and the vanilla chai streusel with the crunchy toasted walnuts.  Match made in heaven.  This is my favorite Amish Friendship Bread recipe I’ve made to date! 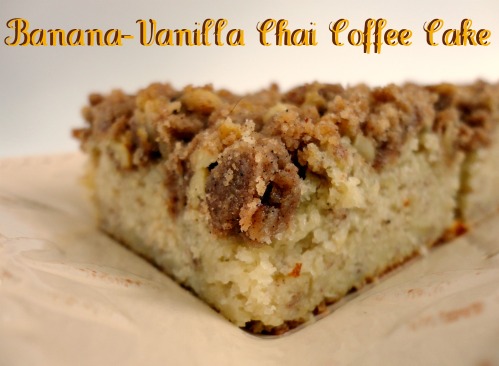 If you want to make this but don’t have any Amish Friendship Bread Starter, click here to learn how to make the starter, or if you’re local, I might be able to hook you up if you request it quick enough–I still have one to spare. 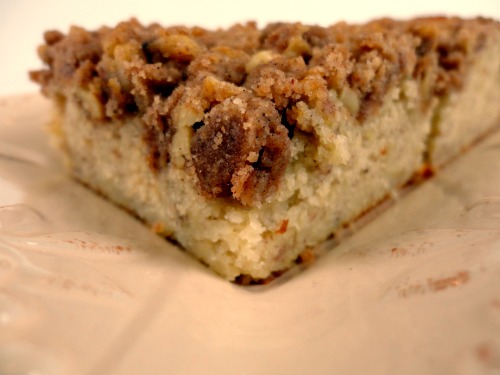 To make the chai streusel, combine the sugars, vanilla bean seeds, cinnamon, cardamom, ginger, cloves, nutmeg, and salt in a small mixing bowl; stirring with a fork until well combined. Stir in the walnuts, then pour the butter over the top and mix until combined. Add the flour and mix until incorporated. Set aside.

Pour batter into the prepared cake pan and sprinkle the streusel over the top. Bake for 40 minutes or until a tester inserted in the center comes out clean. Cool completely before serving or covering with plastic wrap. Serve at room temperature.

I have a kitchen addiction and love to collect & share recipes. My passion is baking but I love to cook as well. The only thing I don't like to do in the kitchen is wash dishes, but my husband generally does them for me in exchange for his dinner.
View all posts by Veronica »
← Lemongrass Chicken with Peppers
Randomishness →