If you’re looking for the usual fried “chicken” pieces (is that grisly stuff really chicken? It seems rather suspicious to me!) served with scary hot pinkish-red sauce, you’re in the wrong place! What I have instead is a wonderful version that does not involve frying, but does involve real chicken, with the only red in it coming from the peppers.  It’s real.  It’s healthy.  It’s bright & colorful.  It’s delicious!  For reals.

Although I found this recipe unique and refreshing, I balked a little at the green beans.  They just seem so random!  I considered subbing green peppers, but I went with it and it all worked great, plus they made for a some nice visual variety amidst the square-ish chunks of chicken and peppers.  I’d recommend following the directions, however, and cutting the green beans in half, because I discovered that forgetting to do so makes serving and eating them kind of tricky. Oh well, it was still delicious and there’s always next time! 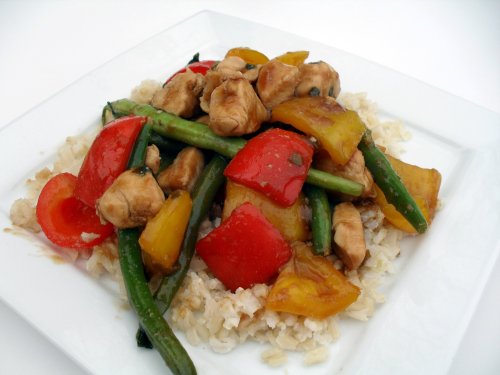 Cook rice according to package directions. Heat oil over high in wok. Add chicken, peppers, green beans and cook until softened, 5 min. Add scallions, ginger garlic and cook until chicken is cooked through and vegetables are tender, 4 min. Whisk soy sauce mixture, add to skillet, and cook until sauce is thickened, 3 min.

This post is linked with Cupcake Muffins for this week’s BSI: green beans!

I have a kitchen addiction and love to collect & share recipes. My passion is baking but I love to cook as well. The only thing I don't like to do in the kitchen is wash dishes, but my husband generally does them for me in exchange for his dinner.
View all posts by Veronica »
← Chocolate Torte
Cornmeal Griddle Cakes →