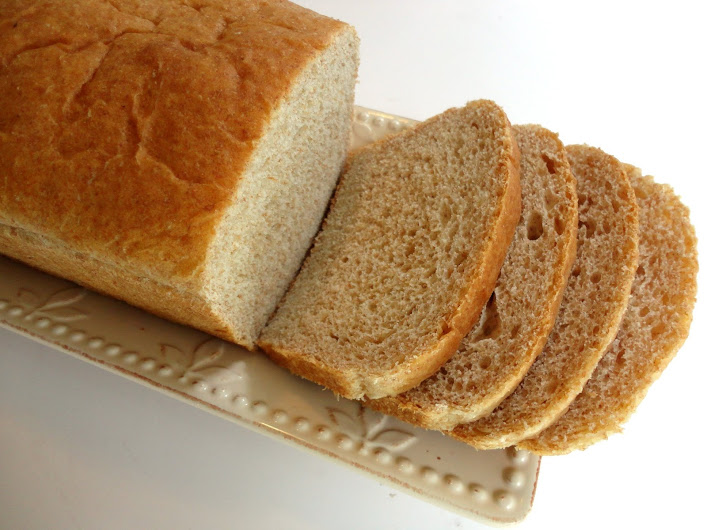 You can thank The Secret Recipe Club for bringing me out of hiding this week! If it weren’t for being in the club, I’m sure I’d have gone to bed early last night (long day) instead of scheduling this to post.  So hopefully you’re more thankful about that than I am-LOL! ;) 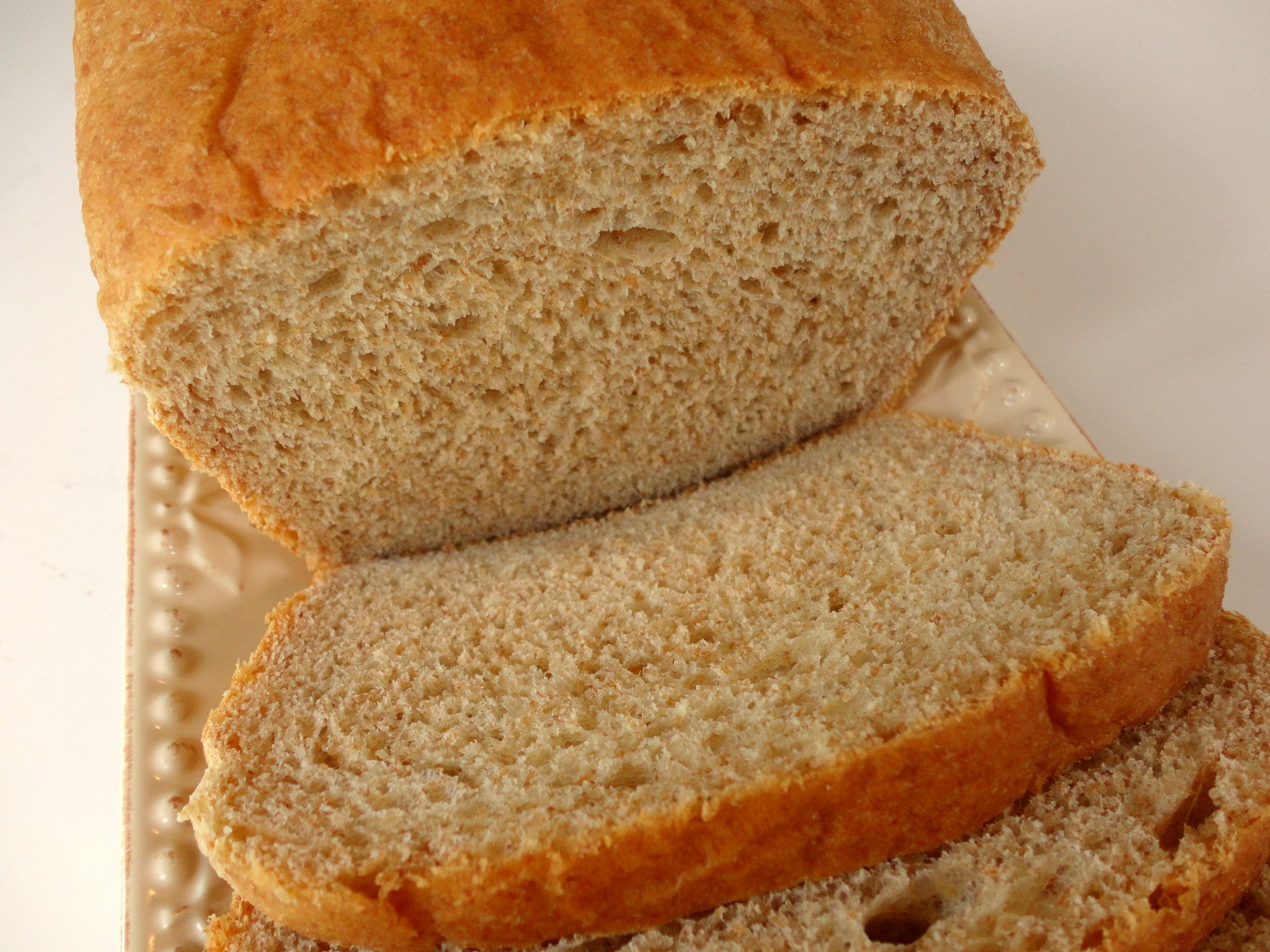 This month I was assigned to The Vanderbilt Wife.  Yay, another blog that starts with “V” (you might not be aware, but we are an endangered blog species, though not as bad off as blogs beginning with  “X” and “Z”)!  Jessie is also a sister in Christ, so let’s give a little HOO-WAH for that too.  Or maybe you could just wait while I do it.  HOO-WAH!  So lovely to meet you, Jessie!

Anyway, my assignment came right after a failed attempt at 100% whole wheat bread.  It was supposed to be the best whole wheat bread ever…but it was not.  So when I saw Jessie’s beautiful Fluffy 100% Whole Wheat Bread, I freaked.

“Dennis, guess what she has on her blog?” I shrieked.

“Light and fluffy whole wheat bread?” he guessed without even glancing over at my computer screen.

(From that you can assume correctly that I had made it very obvious how deeply disappointed I was with the dense and yucky-tasting loaves I’d just made.) 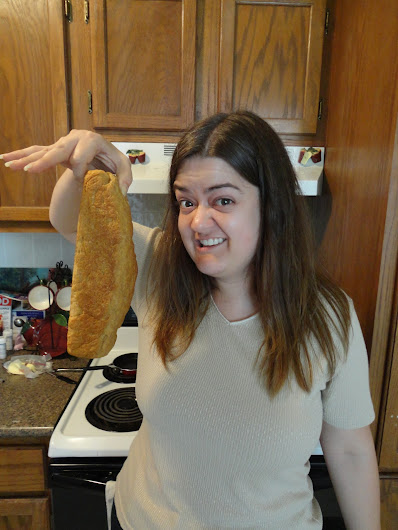 And I proceeded to make the recipe.  Three times.  It makes three loaves per recipe, so I made nine loaves of whole wheat bread within the span of two weeks.  Unfortunately, I never got the bread to stay risen once it started baking so those nine loaves weren’t as light and fluffy as I’d have liked.  Each batch started out so high and promising… 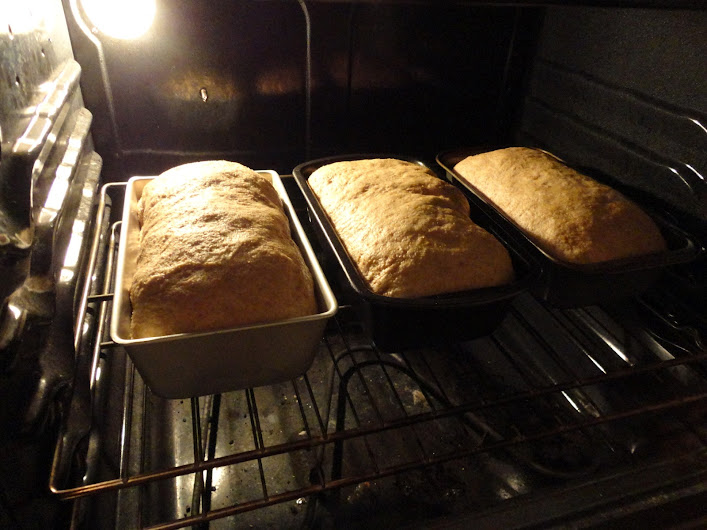 only to let me down half way through baking. 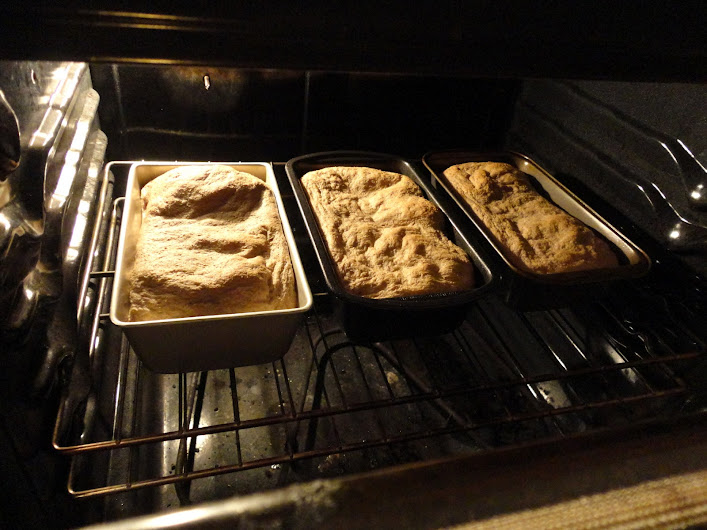 Since I couldn’t consult Jessie to see if she had any suggestions (in the SRC, you don’t alert the blog you’re assigned to because it’s meant to be a surprise on reveal day, and I couldn’t ruin the surprise by asking her for help), I never got the recipe to turn out for me,  but it did work for her so please visit her blog to see how light and fluffy her loaves are.  I’m bound and determined to get the same result and will post the recipe on my own blog once I’ve got it figured out.

Since I started out with a yeast bread recipe from Jessie’s blog that I couldn’t get to turn out right, I went with another yeast bread recipe of hers that included some white flour (white flour helps because the gluten develops better and easier than with whole wheat).  I’ve been wanting to try making potato bread for years, interested in how the potato would affect the texture, so I was excited to see she had a whole wheat potato bread recipe on her blog. 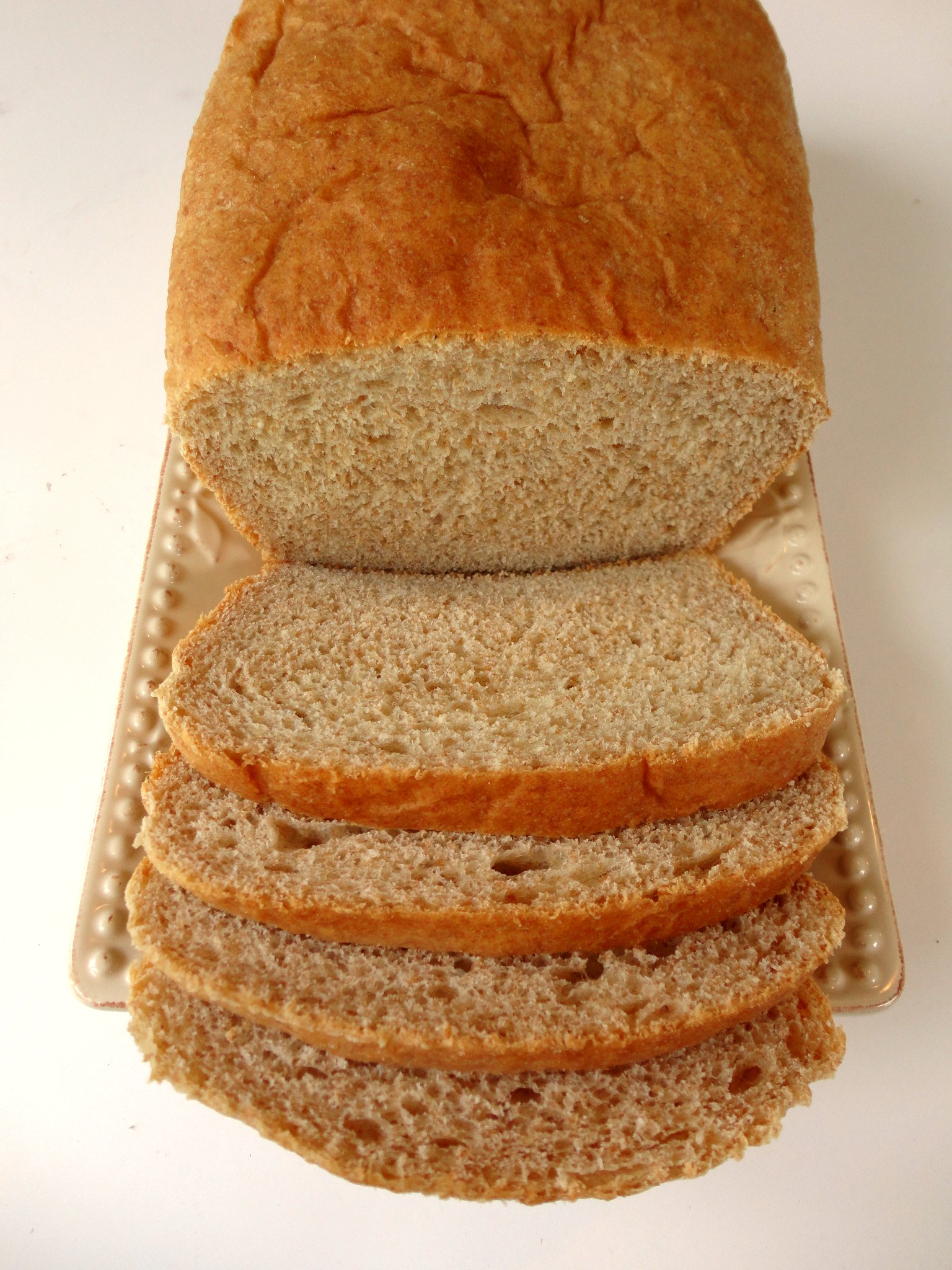 Let me tell you, making those nine failed loaves was totally worth it since they eventually led me to this recipe.  (Also, those nine loaves, though deflated, were delicious and still fairly light, and all were eaten by my family who praised it highly.)  This is the lightest, softest bread I have ever made that has whole wheat in it!  It is so soft, in fact, that it’s hard to hold on to it while slicing without smashing it (I used an electric knife after the first slice, and highly suggest it if you have one–it makes the slices nice and even without crushing the bread.) 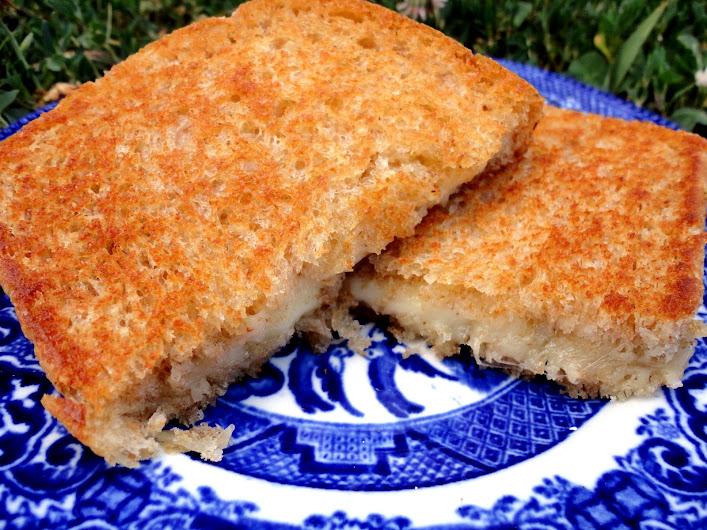 It is delicious and is perfect for making sandwiches, with a little more nutrition than plain white bread.  Jessie said it made killer grilled cheese sandwiches, so I put it to the test with some pepper jack cheese.  And I concur, KILLER!  I really hope you try this! 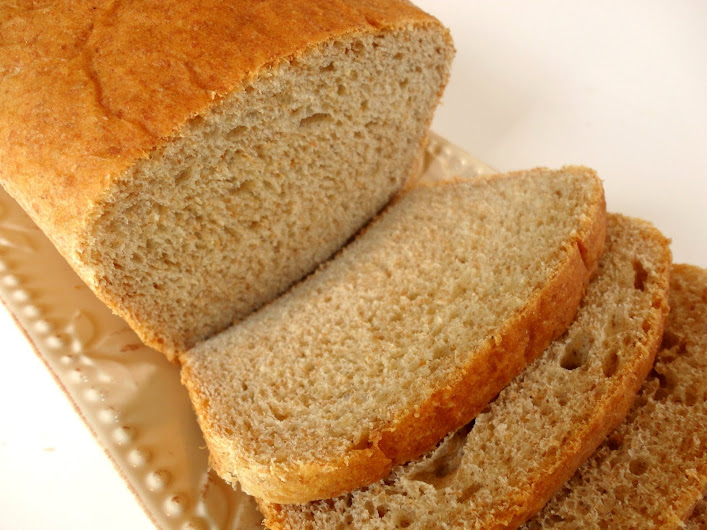 Peel the potato, cut into cubes, and boil in a small saucepan until very soft. Drain, reserving 1 cup cooking liquid. Mash the potato in a small bowl and let cool slightly.

In a small bowl, put the ½ cup warm water and sprinkle the yeast over it. Let is sit for 10 minutes, then add to the potato mixture and beat until combined.

Change beaters to dough hooks and set mixer to 2. If you don’t have dough hooks, you will use your hands from this point forward. Add 2 cups whole wheat flour alternately with the 1 cup cooking liquid*, mixing/kneading well after each addition. Gradually add in the remaining flour until the dough starts to clean the side of the bowl. When that happens, let mixer go an additional 2 minutes. If kneading by hand, knead it in the bowl for about five minutes, or turn out onto a floured surface to knead. My dough was still a bit sticky when I stopped adding flour, but if I picked a ball off and rolled it in my hands, it did not stick to my hands. That is my test to know when I can stop adding flour, even though I really wanted to add more to keep it from sticking as I kneaded. I dealt with it and just scraped my hands off afterward. :)

Once your dough looks a little shiny, you’re done. If it doesn’t look shiny, just let it mix or knead it by hand until it does.
Place the dough in a greased bowl, cover with a towel and place somewhere warm. I like to preheat my oven to 350F for one minute, then turn it off and place my bowl in the oven. Let rise for an hour or until dough is doubled.

Punch dough down; divide in half. Shape into loaves by pushing each half into a rectangle, rolling it up, pinching the seam, and tucking the ends under. Place in two greased loaf pans (I slathered mine generously with softened butter). Cover with the towel again and let rise another 30-45 minutes or until doubled again.

Bake at 350 for 25 minutes or until golden brown. Remove from pans and rub the tops with a stick of cold butter. Set on a wire rack to cool

*Notes: Make sure your cooking liquid has cooled to about 115F before adding to the bread dough. If it is too hot, it will kill the yeast. 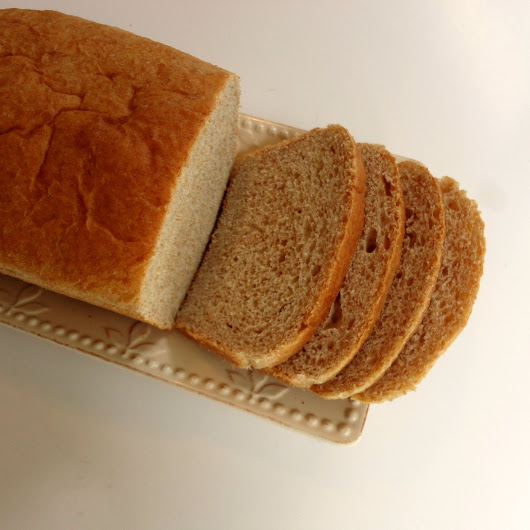