Thursday: My husband’s sense of humor.  As an example, here is an actual exchange we had last Saturday:

Me: “I wonder where the Kansas Medical Center is.” Dennis: “Kentucky.”

And this is the exchange we had this evening.

Me (after asking him a question from the kitchen): “Am I just talking to myself?” (no response.) “I guess I am if no one is listening.” Dennis: “I guess you’re not talking to any body if you’re not even listening to yourself.” (Silence.) Dennis: “Did you have something to say?” Me: “No.” (annoyed) Dennis: “Guess I didn’t miss anything, then.”

These exchanges occur regularly and I always act peeved, because it’s like a requirement to the balance of our relationship, but deep down it amuses me. We’re like an old Jewish couple.

Friday: I can’t believe I’m saying this…but…Doctor Who.  That’s what I was thankful for on Friday.  I’m sooo not a sci-fi girl, but this television show I’ve learned to enjoy.  But I was more thankful for it as a distraction on Friday, the night before the 710 exam that would determine my future with the Post Office.  I did all the prepping I could, and Doctor Who helped me unwind.

Saturday: That my test is over!  It is a relief to have it behind me.  I put my trust in God and that made a big difference.  I’ve taken this test four times now and never felt as good about it as I do this time.  I won’t know my score until next week, but I know I did my best and so I’m at peace with whatever it may be.  I’m fairly certain I at least did well enough to keep my job, even if it doesn’t help advance me to a permanent position.

Sunday:  Money is tight this week, but God always provides!  I got an unexpected grocery gift card and $10 for a cake I made that I asked no $$ for. 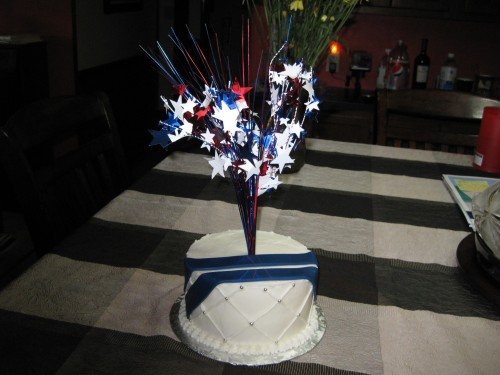 I showed you guys the July 4th wedding cake I destroyed.  I gave free cake to the bride for a year and this is my last one, requested by the mother-in-law, a topper for their first anniversary, since there was no surviving topper for them to freeze.  It is a near-exact replica of the top of the actual cake, minus all the carnage.  The MIL took this photo from the side instead of the front (the stripes should be going down the front at a slant), but you get the idea.

Monday: For having enough but not too much.

Tuesday:  A couple week’s ago, my Dad’s cell phone, which is on our plan, died and refused to charge when we plugged it in.  It is still under warrantee and ATT&T said they would mail a new battery and charger to see if that would fix the problem.  Well, the battery they sent wasn’t the right size and when I called, they said they didn’t have the right one and to go on Amazon.com to buy one and they’d reimburse me.  Aggravated, I finally just tried to charge Dad’s phone with his old battery and the new charger. And it worked! It was just the charger that had stopped working and now that we have a new one, the phone is good as new. Woot!

Wednesday:  Children.  I have felt very poor physically the last couple days and after work I just wanted to lie down and die.  But I teach a toddler Bible class on Wednesday night so there was no lying down or dying tonight.  I sucked it up and got myself to Church and went in still wanting to die, but after an hour with a delightful two-year-old girl, I was much restored.  It was my body that was ailing, but Leah helped me focus on something else and was her usual delightful self (The most precious moment came when I said “It was a miracle!” (about Daniel not getting eaten by lions in their den) and she repeated “imacurl!”)  I know children can be a challenge, but they are also one of God’s greatest miracles and blessings.  And thankfully, as I don’t have any of my own, I don’t have to face the challenges very often and get the benefits of brief contact instead. :)