I never learned to make goulash – I just knew it had noodles, ground beef, and tomatoey stuff going on in it, according to my Mom’s memories of what her mother made. But she never made it so I just came up with my own way of making it which was sort of like the same way I made spaghetti with meat sauce, but just with macaroni noodles instead.  I have my favorite version of my own version posted here.

I finally had real (real as in the Americanized real, not the Hungarian real) goulash at my in-law’s house.  I’d been wanting to get my MIL’s recipe for a long time, because although Dennis never says “this isn’t like Mom used to make,” I’ve always wanted to cook his favorite meals that he grew up eating and goulash topped that list.  His Mom’s goulash is really, really good!  After enjoying it on Easter, I asked her exactly what she put in it so I could recreate it at home.  I’ve never turned out better goulash and Den’s favorite is now one of my absolute favorites as well. We could eat this almost every week! 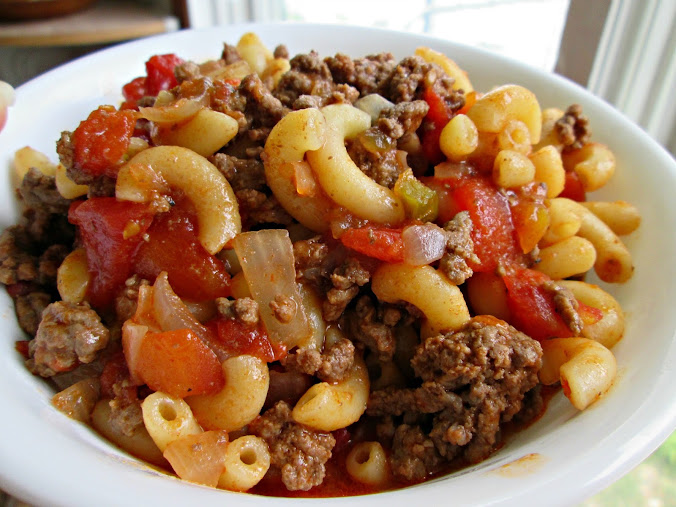 Cook the macaroni to al dente according to package directions. While it’s cooking, brown the ground beef and onion together in an extra-large skillet or in a dutch oven. Drain and season with spices to taste. In a large bowl, mash tomatoes with potato masher and add to beef along with the ketchup. Drain macaroni and add to the beef mixture, stirring well. Taste and add additional seasoning as needed. I didn’t need to add any tomato juice to mine, but if you like yours very juicy you can add as much tomato juice as you like. Phyllis adds it to her leftovers, which I would also recommend, because the noodles tend to soak up all the juice with time.

P.S. Happy anniversary to my hubby! These have been the best 14 years of my life.

I have a kitchen addiction and love to collect & share recipes. My passion is baking but I love to cook as well. The only thing I don't like to do in the kitchen is wash dishes, but my husband generally does them for me in exchange for his dinner.
View all posts by Veronica »
← Microwave Peanut Butter Cookies
Frito Salad →