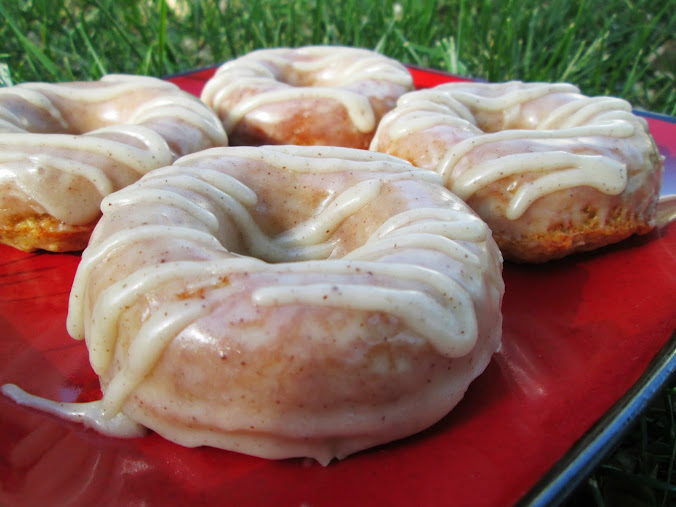 My sister-in-law gave me a doughnut pan for Christmas two years ago…maybe three.  It’s what I asked for, had wanted for years, and yet I only used it to bake the doughnut mix she gave me with it until now!  What is UP with that?

I was Pinteresting (yes, I’m allowed to turn nouns into verbs haha) and came across Shelby’s baked banana doughnuts with a browned butter rum glaze and I HAD TO HAVE IT RIGHT THEN…or at least my own version of it.  :) I had my nearly forgotten doughnut pan, a single overripe banana, and the baby was taking a nap – it was like the stars aligned and God smiled down on me in that instant. I got to work and boy oh boy. These were quick to make and so delicious!  Brown butter and banana are a match made in heaven.  Actually, browned butter makes everything better, don’t you think? 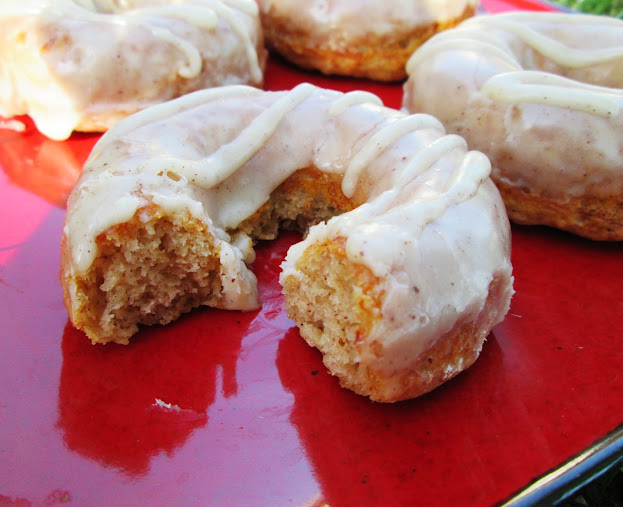 Preheat oven to 350F. Spray a 6-well doughnut pan with oil and set aside (I wipe off the top with a paper towel to reduce the amount of baked-on oil build-up on there but that is your call). Whisk together the flour, baking powder, cinnamon, and salt in a medium sized bowl. In a separate smaller bowl, mash the banana, then whisk in the egg, buttermilk, oil, and sugar. Add to the dry ingredients and stir together until just combined (a few small flour lumps are OK). You can either use a spoon to fill the doughnut pan or put the batter in a ziploc bag and snip a corner to squeeze the batter into the pan. Fill each well 3/4 full. If you have extra, you can make it into mini muffins or wait until the first batch is done baking to make a couple more doughnuts. Bake doughnuts for 12-15 minutes, or until golden and doughnuts bounce back when lightly pressed. Turn out onto cooling rack to cool completely.

While doughnuts are cooling, brown the butter. Place in a small saucepan and cook over medium heat, stirring constantly, until the solids separate and turn a chocolate brown color. Remove from heat and add the powdered sugar and enough milk to get a glaze consistency (it doesn’t take much. Dip the tops of each doughnut in the warm glaze with the cooling rack over the sink so the glaze can drip off as you finish dipping each one. If you have extra, you can put it in a ziploc bag or disposable piping bag and snip a corner to drizzle over the doughnuts because extra glaze makes them extra good! :)

Recipe source: adapted from The Life and Loves of Grumpy’s Honey Bunch

I have a kitchen addiction and love to collect & share recipes. My passion is baking but I love to cook as well. The only thing I don't like to do in the kitchen is wash dishes, but my husband generally does them for me in exchange for his dinner.
View all posts by Veronica »
← Joshua at 5 months
Nutter Butter Banana Cream Pie →