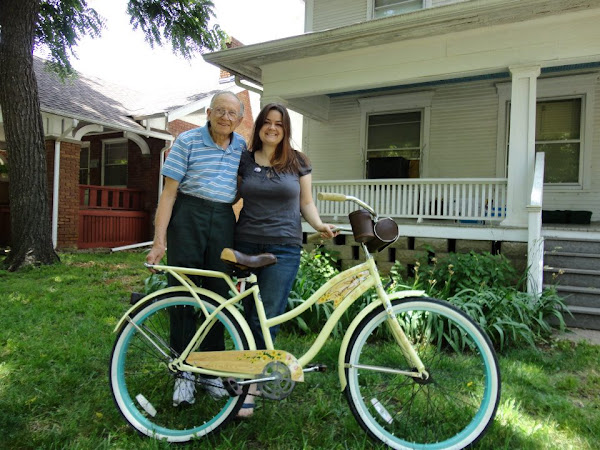 There’s been three weeks of silence here at Veronica’s Cornucopia, which isn’t unprecedented, but I haven’t done that since I was new to blogging with only 1.2 followers, of which 1.02 really didn’t care if I posted or not-lol.  To cut to the chase and explain my absence, my Grandpa passed away soon after my last post and I just  haven’t felt like blogging since.  I still don’t.  I had actually wanted to make a Thankful Thursday about Grandpa ever since he passed away, and just haven’t been able to yet, despite having lots to say, and lots of pictures, and actually really wanting to share his life with you. Just can’t do it yet.

I’m not the broken wreck you may be imagining, for the most part I’m still my happy self, but still, the loss of a loved one takes a toll.  I still can’t believe he’s gone, just one week before he had planned to come visit us.  I’m thankful I got to see him last spring, but still can’t help but wish I’d gotten another “one last time” before he passed.

So anyway, that’s part of why I’ve been gone, the other part being that I just got tired of being tired and decided to start sleeping at night instead of blogging. And it’s made a world of difference–I’m doing much better at work now…though that doesn’t seem to matter as much now that I’m losing my job. Oh joy is my life! haha!  But at least I’m well rested. :)

Anyway, thanks to being in the Secret Recipe Club, I will be posting a recipe on Monday.  I just didn’t want to show up out of the blue on Monday with a recipe and act like nothing had happened, you know?  I had to at least give you something to explain my absence before it was happy happy joy joy recipe time-lol.

I hope you all have been doing well and keeping busy.  I wish I could promise you something as far as writing and reading blogs, but I just don’t know.  I can only promise to do my best to get back to it!  And at least I’ve got the Secret Recipe Club to keep me returning, even when I don’t want to, so thank goodness for the SRC. :)

I have a kitchen addiction and love to collect & share recipes. My passion is baking but I love to cook as well. The only thing I don't like to do in the kitchen is wash dishes, but my husband generally does them for me in exchange for his dinner.
View all posts by Veronica »
← Thankful Thursday #102: I’m alive!
Blueberry-Lemon Pound Cake →