Have you ever watched George Carlin’s skit on “Stuff?”  If not, it’s pretty funny if you have 5 minutes to spare:

So yeah, that’s what I’m thankful for today. STUFF.  That I have too much stuff!  Sure, it’s a problem, but it beats the alternative…not enough stuff!

I won three beautiful jars of Bonne Maman preserves from Nutmeg Nanny in November. The first thing I did with the strawberry was slather it on a cornmeal pancake. Thank you Brandy, we love these preserves!

I got a lot of cookies in the mail last month from the cookie swap.  I swapped with four people but received cookies from six because Allison and Eileen asked if they could send me some cookies too.  Guess what I said? :) The plate has cookies on it from my first four boxes received from Marcia, Jolie, Eileen & Linda. My favorites were the Marbled Cream Cheese Pound Cake from Marcia, Hazlenut Crinkles from Jolie (bottom left on the plate), the Brown Butter Toffee Blondies from Eileen (top middle), the molasses cookies from Jolie (middle right) and the pumpkin chocolate chip cookies from Linda (bottom right).

Look at the adorable packaging Allison and Katie sent their cookies in!  A “cookie radio” tin and a gingerbread house! 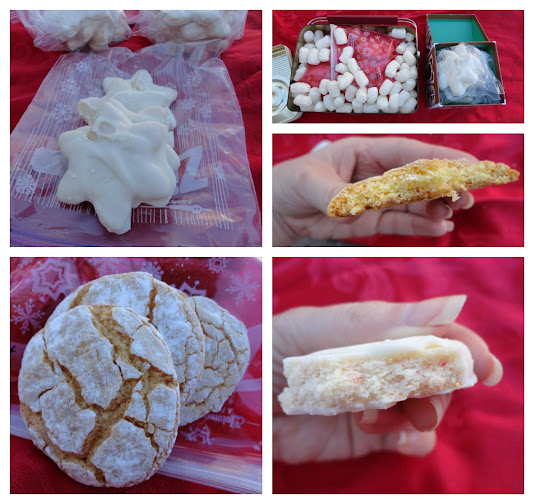 Katie sent White Chocolate Peppermint Sugar Cookies (swoon–my favorite of all the cookies!) and Allison sent some wonderful Lemon Burst Cookies.  I got them late because mail delivery was stopped to our area due to loose dogs (such a bummer) and it took me a while to figure it out, but even after a week in the mail these suckers were incredible and still so moist. Thank you guys, all of you, for the wonderful treats!

After the cookies started rolling in, out of the blue, I got this huge package from California. I love surprise packages!  I opened it up and still had no idea who it was from when I saw what was inside.  I really was not expecting a big box of yumminess.  I read the card and couldn’t make out the name very well, then I looked at the address again, knowing it seemed familiar and everything finally clicked together. A reader named Emma bid on a ton of stuff for Suzie’s bake sale fundraiser and one of the many thing she won was from me (almond fudge cookies) so she had my address from that and sneakily used it to mail me some of her “favorite things.”  Wow, this woman is beyond generous.  Thank you, Emma! 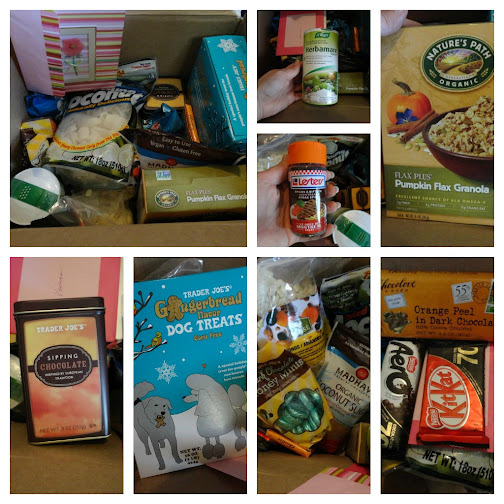 So much goodness! A huge sack of sliced almonds (yay for more almond fudge cookies!), a big sack of dried young coconut (wow so good), seasonings, some major fun dark chocolate (I didn’t even know there were 70% dark chocolate Kit Kats did you?), sipping chocolate, granola, honey mints, coconut sugar, and even some dog treats for Jessie!

I also got some Japanese treats from my friends Kriss & Nicole who moved their family to Japan several months ago.  Kriss used to share these with me when we worked together because his sister always mailed him snacks, so he knew my favorites were the Senbe and included those too. They’re the rice cakes on top–they’re sweet and salty and so good.  Thanks Kriss and Nicole!

I won a giveaway from The Squishy Monster and got a ton of Newman products. I had no idea they even had this large a line!  All of this was so good, though I did give quite a bit of it to my Dad b/c they he loves old-fashioned cookies like gingersnaps and hermits. Thank you Angie! And someone else will be thanking you too soon because I sent a little bit to a mutual friend. :) 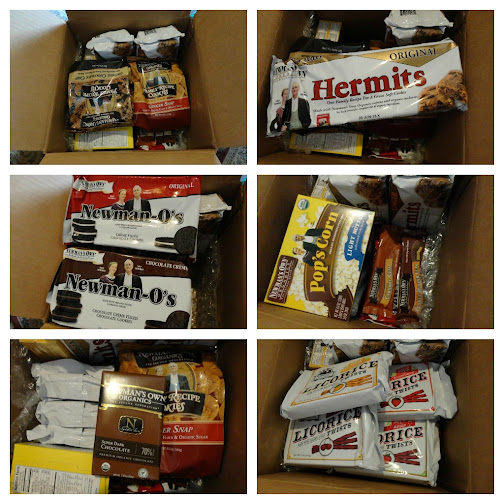 And let’s not forget Xena, my warrior princess.  <3

I also got some gifts last month and I’m not going to share all of them since I’m already overwhelmed by stuff with this post, but here’s a little bit.  I got this angel wrap with matching socks, which is like a robe but way cooler, from my sister-in-law, Joan, at our family Christmas party (we get gifts by drawing numbers, I happened to get her gift).

Joan also drew my name for our personal family Christmas gift exchange (we draw names rather than giving gifts to everyone to save money since we’re always broke-haha).  I’ve been wanting a doughnut pan foreeeeevers and Joan got me a set of TWO! One regular, one that makes twisted long johns-oh yeah!

I had to make the long johns immediately because I’m going sugar-free for a while. Aren’t they cool?! 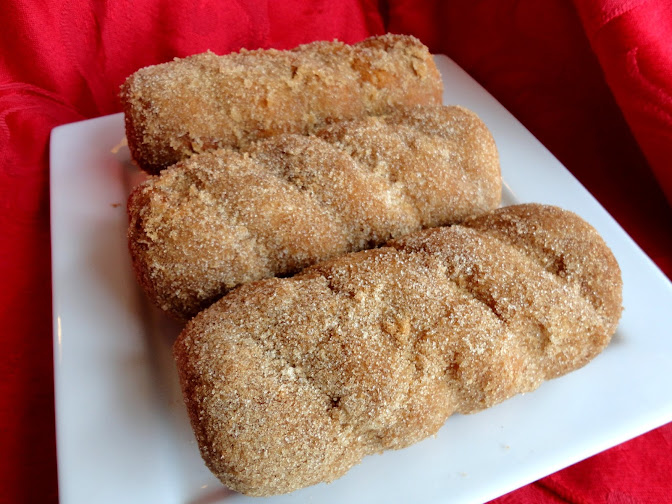 And here’s something I just received yesterday from my friend Erika, who is now a skinny hard core mail carrier:

These are pretty enough to serve dessert in, and bonus: built in portion control. Love it.

So yes, stuff is good, but when you have too much stuff, like I do right now, getting rid of it/giving it away is even better.  So I’m going to do a house purge! In 2011, I purged 111 things from my house in January, then purged 112 things in 2012.  This year, the magic number is 113 things. It sounds like a lot, but this is going to be a cinch. I think I have that many magazines alone to get rid of!  I’ll report back when the house has been exorcised of unnecessary stuff.

What about you?  What stuff are you thankful for right now?  Do you need to do a “stuff purge?”

I have a kitchen addiction and love to collect & share recipes. My passion is baking but I love to cook as well. The only thing I don't like to do in the kitchen is wash dishes, but my husband generally does them for me in exchange for his dinner.
View all posts by Veronica »
← Shredded Chicken with Noodles
Barley with Butternut Squash, Apple & Onion →