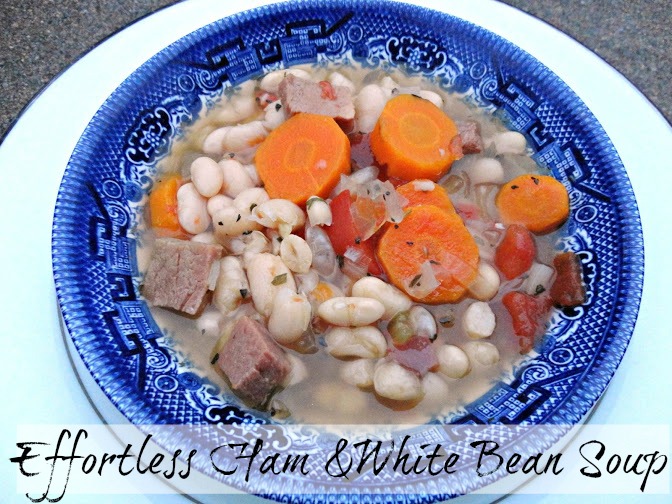 Sometimes I save a recipe and it takes years for me to get around to making it.  Most I’ve never made and probably will never make, despite my best intentions.  And sometimes a recipe finds me at just the right moment, like this one, when I’m craving it, or I happen to have everything needed to make it.

This soup really is quite effortless.  Mary’s recipe is easy to begin with, as it is made in the slow cooker, but I cut out the step of soaking the beans overnight and now it’s even easier!  When I make refried beans in the slow cooker, I don’t soak them overnight and the beans cook up just fine and soft without the soak, so I just used the same amount of water for the soup as if I was making refried beans and it worked great. 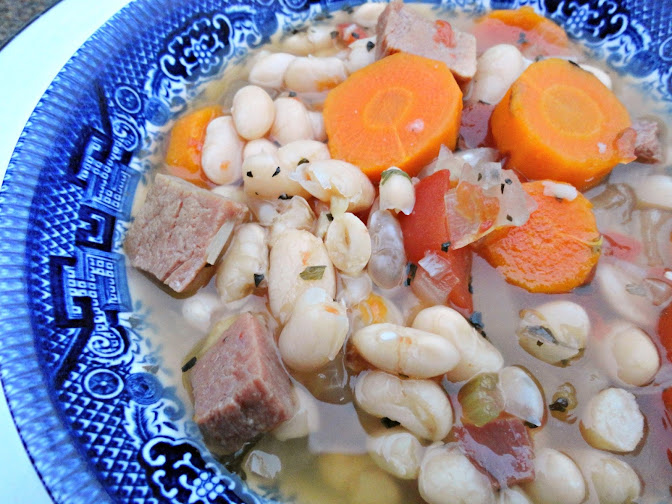 Dennis made a point to tell me several times that this soup was “really good.”  Like I mentioned before, I usually have to pull food opinions from him like teeth, so for him to offer this one up so many times tells you how good it is.  I prefer a ham and bean soup without tomatoes or spices, but did like the addition of the carrots and onions and will definitely include those from now on.  This is a quick, nearly effortless meal to throw into the crock before work and when you get home, you can serve some hearty, warm comfort to your family.  And don’t forget the cornbread. :) 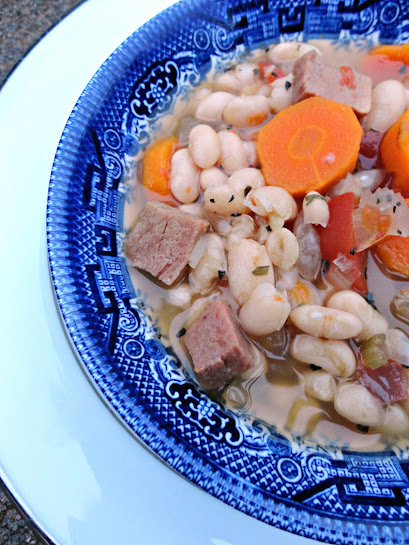 In a large crockpot, combine all the ingredients and cook on low for 8 hours. Mash some of the beans to make the soup creamier if desired. Serve hot.

I recently finished the book The Unlikely Pilgrimage of Harold Fry by Rachel Joyce.  During a walk that originally should have ended at the post office but led him cross country in an effort to reach an old friend dying of cancer, with the unlikely hope his pilgrimage might save her, Harold realized something that resonated with me.  Not wanting to squander his retirement, he eventually depended upon the kindness of others during his journey.  He realizes, “It was as much a gift to receive as it was to give, requiring as it did both courage & humility.”

I thought of Suzie then, because she has exhibited such courage and humility in the face of her inability to pay for an operation she needs.  She has been so thankful in her communications with me, and now extends her gratitude to everyone on her blog today.  (You can read it here if you haven’t already.)  I think it does take incredible courage and humility to admit you need help and frankly, Suzie, I think we can all say that it truly was a gift to pitch in whatever way we could, if only with well wishes and prayers.  We all wish you the best, and thank you for the chance to join with others to make a difference for the better. <3

I have a kitchen addiction and love to collect & share recipes. My passion is baking but I love to cook as well. The only thing I don't like to do in the kitchen is wash dishes, but my husband generally does them for me in exchange for his dinner.
View all posts by Veronica »
← My socks are missing
Virginia Street Banana Nut Bread →