My socks are missing

Do you know why my socks are missing?  Because you rocked them off!  I could not have imagined the bake sale going any better than it did.  When I imagined what the day would be like, I thought I’d be checking my email once an hour, being excited that there would be maybe one or two new bids, updating my post, and then returning to doing something else in the mean time.

Instead I was glued to my computer the entire day, getting new emails at least every fifteen minutes if not more often.  Not every one was a bid, but that’s how often I was receiving emails about the bake sale.  And yeah, that collage up there was about how it went for me on Friday, feeling like a train wreck when I had to act like a normal person and wake up at 8 AM (I was up until 4 am, which is actually an early bedtime for me), but then I was pretty much rocking out (not necessarily with banana bread in hand but I think you get the idea-lol) for the majority of the day-it was so exciting the day just flew! And then by the end of it, I was melting with exhaustion. It. was. awesome.  (BTW, try not to be too jealous of how photogenic I am!)

I know you’re dying to know how we did with raising money for Suzie so without further ado, here’s the breakdown:

Donations from Suzie’s friends and family: $315

I’m so happy with the amount we were able to raise!  Her medical expenses will be much more, but $1440 is a whole lot more than she had to put toward them, and she will be that much less in debt after her gallbladder surgery. And I’m not done yet!  I have a few more tricks up my sleeve.  :)

But first, I want to thank everyone who donated, baked goods or money (in some cases, you did both!) everyone who played a part-not only those who made bids or donated money/baked goods, but also those who tweeted and shared on Facebook and in messages.  One friend sent me a message saying she asked Martha (Stewart) to retweet about the bake sale and she was going to hit up Ellen next. Bwah!  So that’s why we did so good! ;) 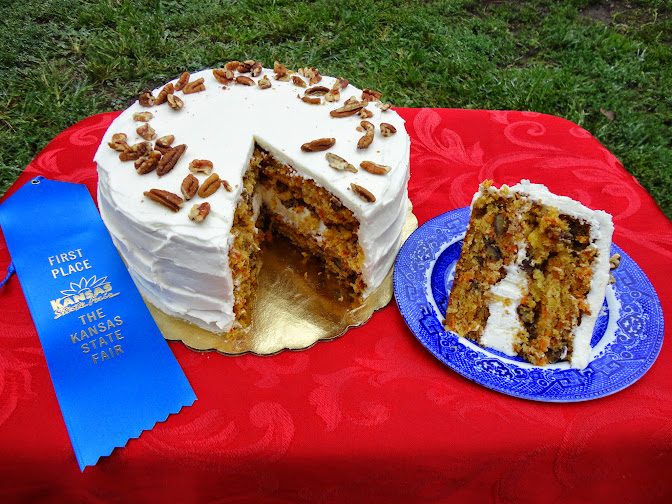 OK, so are you ready to hear about these tricks I have up my sleeve?  First of all, I started “selling” my award-winning recipe for carrot cake for donations, and that’s part of the reason why there was so much extra donated from winners and from non-winners that participated in the sale.  And I’m now going to open this up to every one.  If you make a minimum $5 donation on Suzie’s fundraising page, I will email you my blue ribbon & sweepstakes carrot cake recipe as soon as you forward your donation receipt to VRAKLIS@YAHOO.COM.    (Sweepstakes means it won best of all cakes submitted for judging, not just best carrot cake.)  I will not be blogging this for at least another year so you will have a recipe that is pretty special and not readily accessible.

The other trick up my sleeve is something else donated that didn’t make it to the bake sale in time.  My Foodie Mama, whom I’ve mentioned extensively in many posts, has kindly offered two of her cookbooks, which she will sign to the winners with whatever inscription they choose.  Marina has won hundreds (and hundreds!) of ribbons for her recipes, sweet and savory alike, over the last thirty years.

Just a few of Marina’s ribbons.

I have blogged some of the recipes in this book so you can sneak a preview of the yumminess you’re in store for by checking out my posts on Cookie Brittle, Chocolate Eclair Squares, Heavenly Peanut Butter Pie, Crab & Avocado Enchiladas, and Fiesta Chicken & Southwest Cornbread Casserole.  She has a special section in the back for some of her award-winning recipes, including that peanut butter pie, and she is also offering to include four bonus recipes with each cookbook: Grace’s Danish Pastries Tea Cakes, Butterscotch Chocolate Chip Cookies, Four Layer Dessert, and Apple Pie Cookies (Marina realized too late her Eggnog Pie is already in the cookbook so I had to update this).

If you’d like a cookbook, you can email me at VRAKLIS@YAHOO.COM with your bid ($10 minimum starting bid).  The auction on these will run until the end of the week and I’ll email the two highest bidders on Saturday. I will put the current high bids on this post so you can check back from time to time to make sure you’re still one of the high bidders. :)  Current High Bids: Joan $10

The last trick I have up my sleeve is something I would need help with.  I would like to put together a PDF cookbook holding all my own award-winning recipes so that I could “sell” it for more donations for Suzie.  But I simply don’t have the time to put it together.  If there is anyone reading this that has mad Adobe skillz and also has time to put the cookbook together, please let me know!  I would be so grateful.

I’m terribly sorry this post is so long, I’m done now except for a reminder.  Don’t forget the sign-up deadline for the cookie swap is this Friday, November 9th.  Click here for details. Peace out my Cornicopi-cats!

I have a kitchen addiction and love to collect & share recipes. My passion is baking but I love to cook as well. The only thing I don't like to do in the kitchen is wash dishes, but my husband generally does them for me in exchange for his dinner.
View all posts by Veronica »
← THE Online Bake Sale
Effortless Ham & White Bean Soup →