*There will be two posts today, as it is reveal day for Foodie Pen Pals, and also a tribute to a special blogger that passed away last month. Check back at 11 CST for the next post!

I had a lot of fun this month with Foodie Pen Pals.  Molly got me as a match and she was so nice in her emails.  She didn’t just ask if I had any food preferences, she asked what I was interested in, and about my family, and if I had a dog.  She definitely was a good example to learn from about how to be a good foodie pen pal!

When my husband called me at work to let me know I got my box, I was so excited I left work early when they offered, just so I could come home and open it a little sooner! 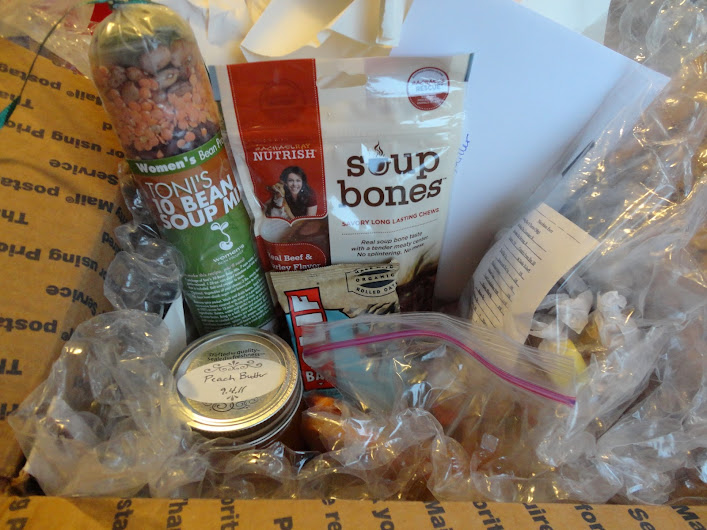 Look! I got STUFF!  Let’s take it out of the box so you can see it better… 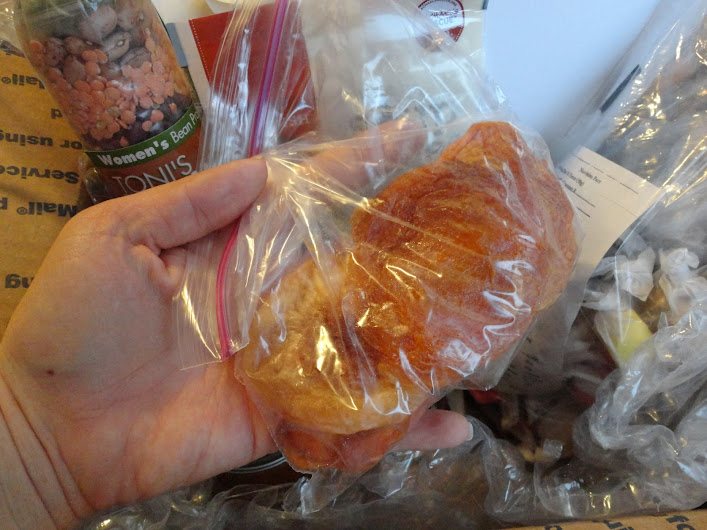 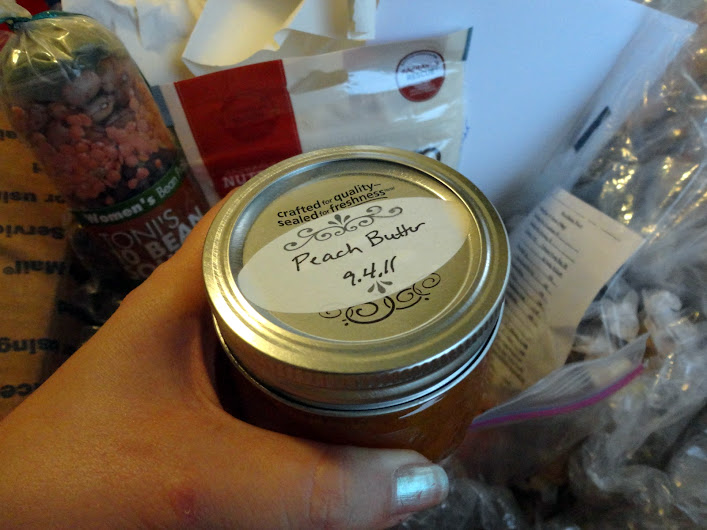 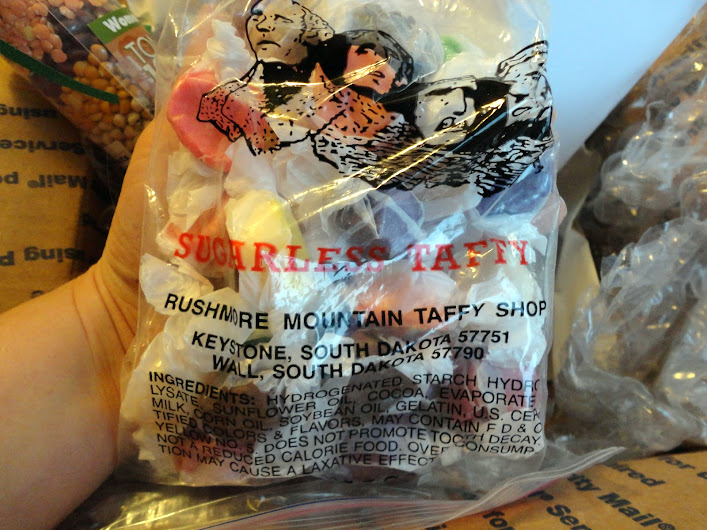 Sugarless taffy that’s so good, even Dennis couldn’t tell it was sugar-free.  This is a local product in her area, and I love getting neat things like this from people’s hometowns.  Notice the warning at the bottom: “OVER-CONSUMPTION MAY CAUSE A LAXATIVE EFFECT.”  That warning made a really handy portion control monitor for me!  I make sure not to eat more than four per day.  I’m pretty sure if they put that warning on all candy, the obesity epidemic would decline rapidly. lol 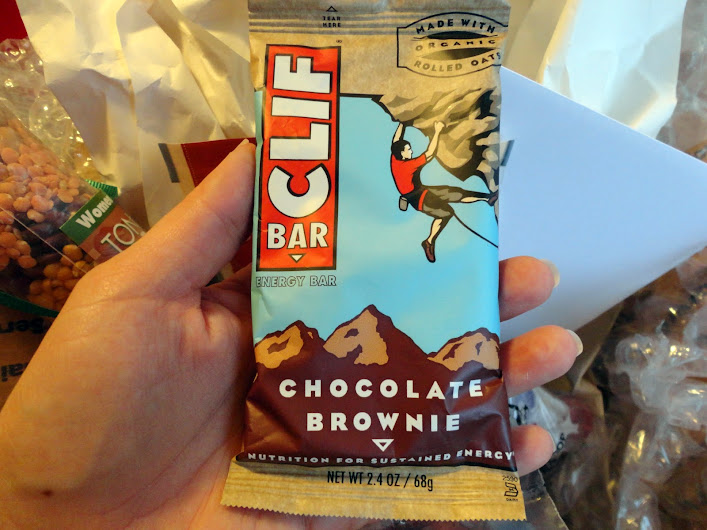 A healthy Clif brownie bar. I didn’t think I liked it but it grew on me, and Dennis liked it from the first bite.  You just have to eat things like this without expecting it will taste anything like the real thing.  Clif bars are especially good for a healthy breakfast or snack on the go, and provide sustained energy. 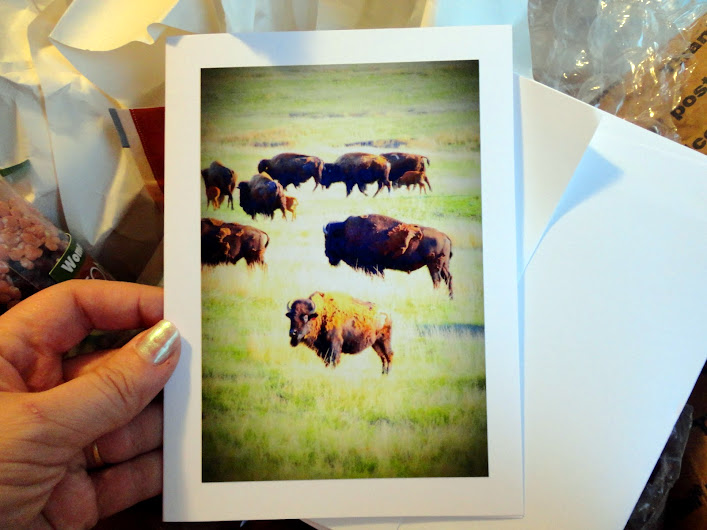 Love the card she sent!  This is a real photograph affixed to a card.. 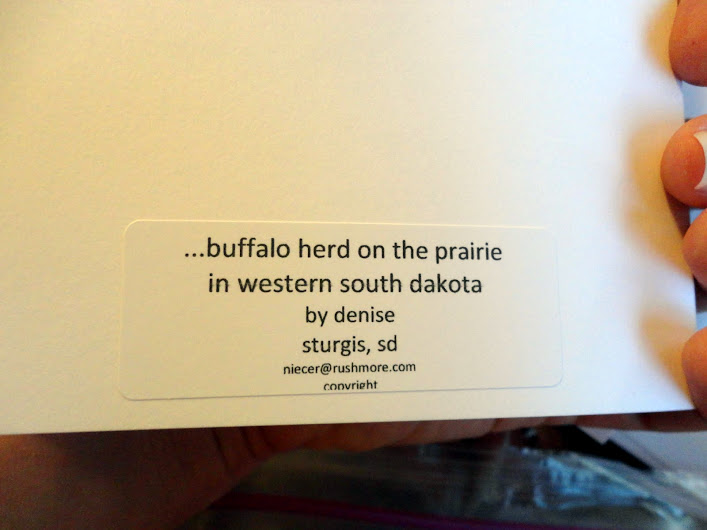 I didn’t get any more pictures of the things individually but did take a pic of everything assembled after I’d already dug into a few things. :) 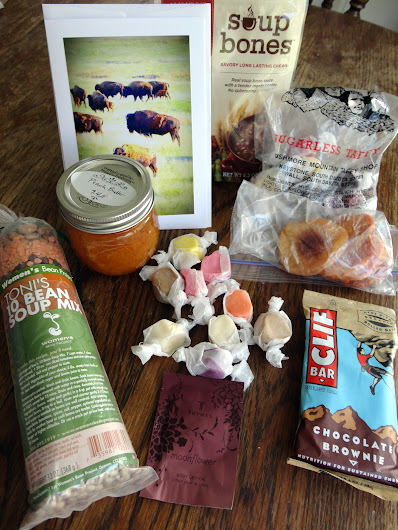 You can see I got a soup bean mix (the company that makes this is great–check it out and their products here) and a little packet of sparkly lotion, and soup bone dog treats!  I loved that she sent something for my baby. :)  There were three bones in the bag and it was perfect because we just so happened to be watching two other doggies when the box came. 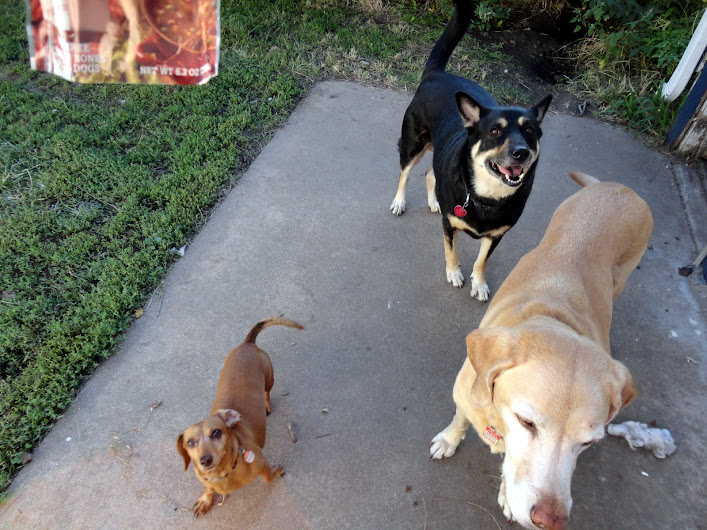 Miss Weenie (I bet you can’t guess which one she is) and Jenny with my Jessie in the back. 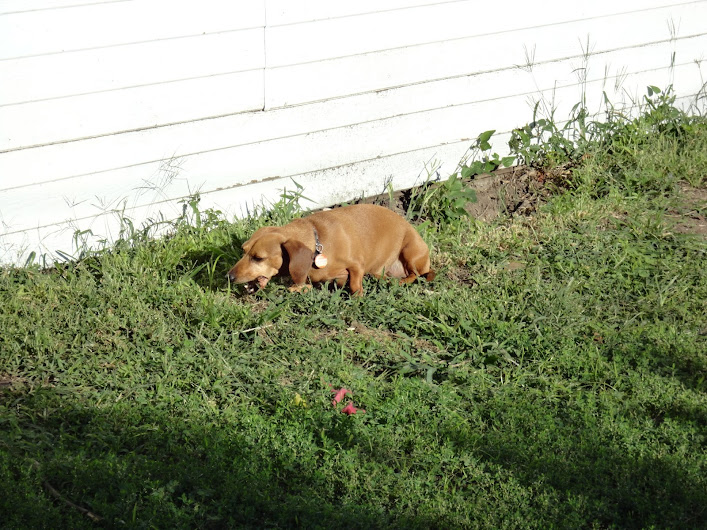 I cut Miss Weenie’s bone down by 2/3 because I didn’t want her getting obese on my watch-lol!  It was still pretty fat for her mouth but she managed it. 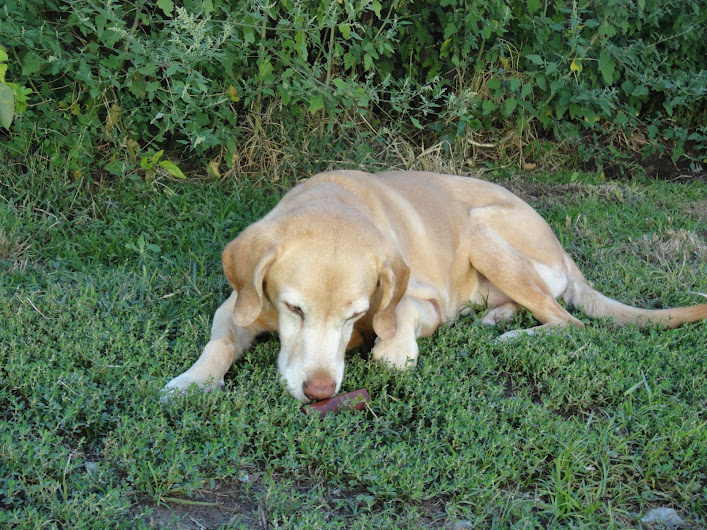 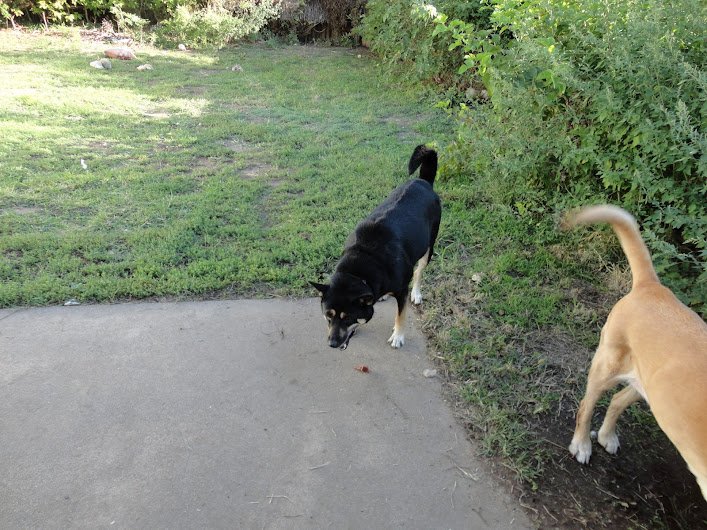 When Jenny abandoned half of her bone to spy on someone who was walking down the street, Jessie snuck up and gobbled the rest of it down.  You can see her hair sticking up along her spine because she was ready to do battle for it-LOL! She knew she was being a bad girl, but I didn’t realize what she was doing until after I took a picture and the bone was gone.  Thankfully I still had the 2/3 left from Weenie’s bone to give Jenny.  Jessie is such a hog! lol

As for that peach butter (it’s so delicious-Molly shared her recipe with me and you can snag it here), it made it’s way to some homemade biscuits… 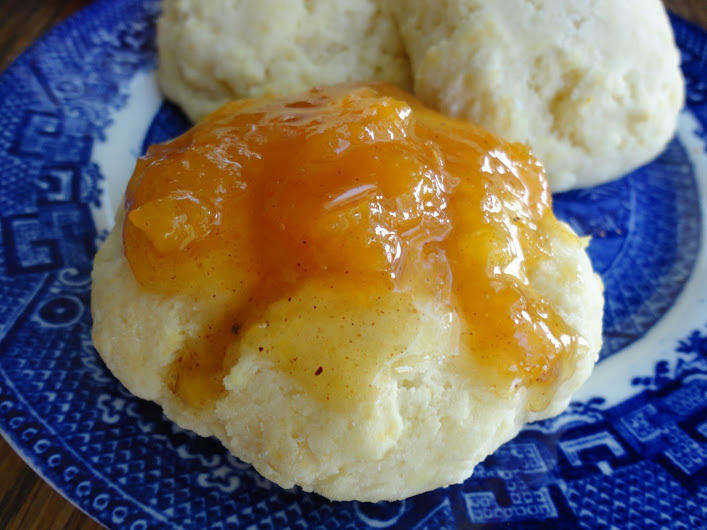 And I followed the directions on the soup mix sort of, leaving out the canned tomatoes and adding ham, and we had a mighty delicious dinner of beans and cornbread… 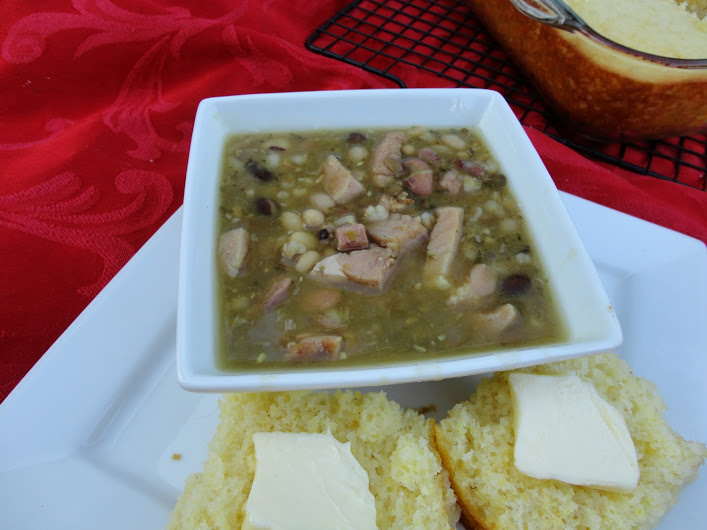 Veronica, I think I started using everything or close to it, the day I received my box.  It was like Christmas in Sept.   The treats were delicious, the candy is still chewy and I’m hoarding it, just for me.   So much of it is put away and already used.  I’m looking for the premium yeast, it’s not in my store yet, but I’ll find it.  Thank you so much for a fun package and for the fun emails before.
Ellen 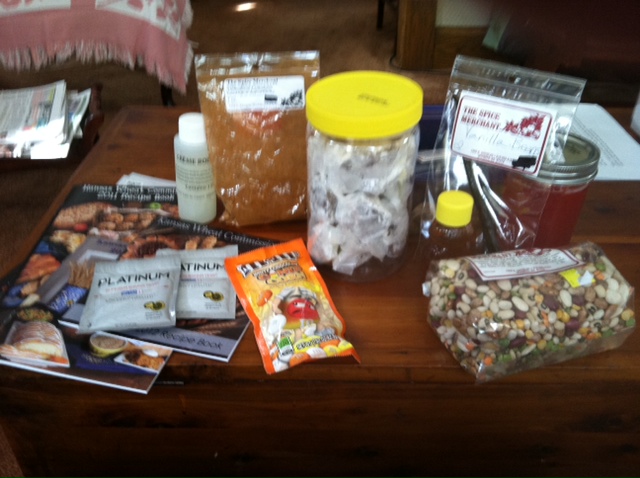 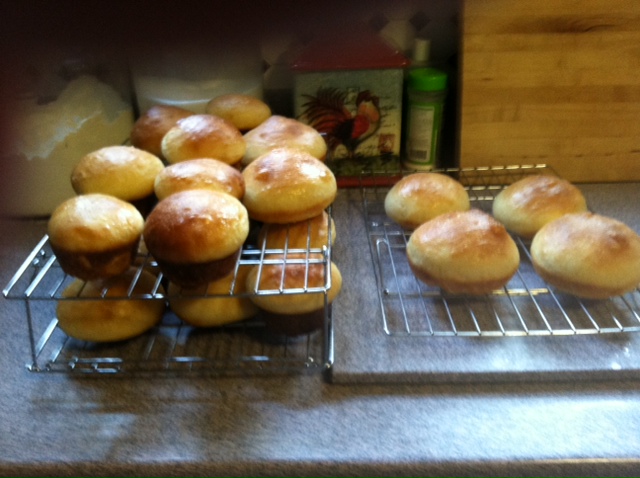 Rolls Ellen made with the Red Star Platinum yeast. Confession: I got those packets for free when I entered the fair this year!  I tried one too (actually, you’ll see what I used it in in my next post today) and loved how well it made my rolls rise.

Pumpkin pies Ellen made with some Vietnamese cinnamon. How pretty are her pies?  She also made a pumpkin cake with the creme bouquet in the frosting and cinnamon in the cake, but she said they ate the whole thing before she got a picture! lol

This is the last time I’ll be able to participate in Foodie PenPals until Haus is employed again, so I’m glad to got to go out with such a bang!  Thanks Lindsay for making this all possible–it’s the coolest project evah!

I have a kitchen addiction and love to collect & share recipes. My passion is baking but I love to cook as well. The only thing I don't like to do in the kitchen is wash dishes, but my husband generally does them for me in exchange for his dinner.
View all posts by Veronica »
← A Thumbful Thursday?
Chocolate-Filled Orange Buns →