~This giveaway is now closed. Congratulations to Amanda, the lucky winner! 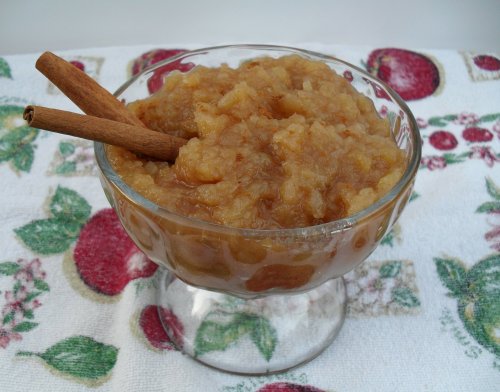 There is a shop in Wichita called The Spice Merchant that, until recently, I had never ventured into.  Now that I have, I’m slightly dismayed that it took me so long, but I’m very happy that I now have access to premium spices & products that I have been trying to find for years!  I snapped up some Vietnamese cinnamon that was so fragrant, it almost smelled hot like cinnamon oil.  I added whole nutmegs to my basket, saffron, vanilla beans, smoked paprika, fenugreek…I couldn’t stop marveling at all the things they had that I previously could only find online.

When I got home, I got to work making applesauce with 6 pounds of the apples a friend gave me from her tree.  I decided I had to add some of my newly purchased spices and the end result was the best applesauce I’ve ever had!  I usually despise applesauce except as an ingredient in baked goods, but I found this fancy stuff so tasty that I’m actually eating the last of it as I type this post–all six pounds gone!

*Moment of silence to observe the dearly departed fancy applesauce.*

To celebrate my first blogoversary, I purchased more of the same ingredients I used in the applesauce to give away to you!  If you like to bake, these will come in really handy this holiday season.

To enter to win 2 ounces of Vietnamese cinnamon, 4 Tahitian Papua New Guinea vanilla beans, and 8 whole nutmegs, simply leave a comment on this post.  I will draw a winner from the comments using Random.org on Black Friday.

Peel, core and slice the apples.  Put in an extra-large bowl.  In a small bowl, mix the sugar, cinnamon and nutmeg.  Scrape the seeds out of the vanilla bean and stir into the sugar mixture.  Pour over the apples and mix until coated.  Dump into a 6-quart crockpot.  Combine the apple cider and lemon juice and pour over the apples.  Cover and cook on high for 4 hours; mash with a potato masher (will be chunky—to make smooth use a blender) and add additional sugar and spices to taste.

Linked with Around My Family Table for BSI: vanilla

I have a kitchen addiction and love to collect & share recipes. My passion is baking but I love to cook as well. The only thing I don't like to do in the kitchen is wash dishes, but my husband generally does them for me in exchange for his dinner.
View all posts by Veronica »
← THE Mocha Crunch Cake
Incredible 2-Hour Turkey & Other Thanksgiving Ideas →