*Update: You can now get my updated recipe that I submitted to the fair here.

So that you won’t have to endure reading this whole blog to find out whether I won or lost, I’ll tell you right now.  I got a ribbon. :)  Read on if you’d like to hear the whole story.

Wayne Gretzky is famously quoted as saying, “You  miss 100% of the shots you don’t take.”

That is really good life advice, and though I do miss a lot of shots because I’m too scared to take them, I can proudly say I would have made Gretzky proud with the way I put myself out there for the state fair competitions this year!  Well, either proud, or at least impressed by my audacity. ;) 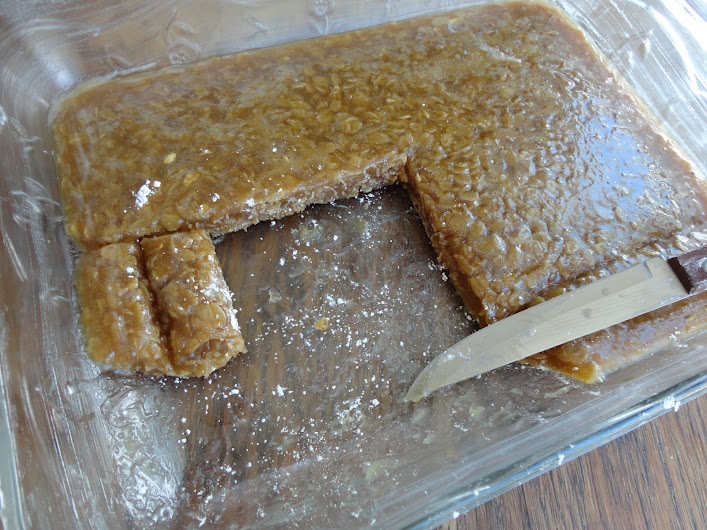 From my snot sauce cookies, to my un-risen bread (not to be confused with the risen dead, though almost as horrifying from a baker’s perspective), to my burnt up and crust-fallen-off pies, I took a lot of chances this year and really set myself up for a lot of criticism, which I will be reading come this Sunday when I get my judging papers.  But as with the short loaf of bread that won third place, you just never know what the judges will think or how your entry will compare to others, and sometimes you just gotta take the shot and put yourself out there, ready to be disappointed & embarrassed, so that when you succeed, it’s even sweeter.

Such is the case with Grandma Joy’s Oatmeal Candy.  I did learn a lesson this year (make that many lessons), which is READ THE RULES VERY CLOSELY.  I scanned the information about the Heritage Recipes Contest, gathered that they were looking for old recipes that had been passed down in families since at least 1950, got excited and stopped reading.  I made Grandma Joy’s Oatmeal Candy recipe, which has been in Dennis’ family since 1890, put six of the candies on a white paper plate, following the requirements for the baked goods contests, and sealed it in a Ziploc bag, ready to submit it for judging. 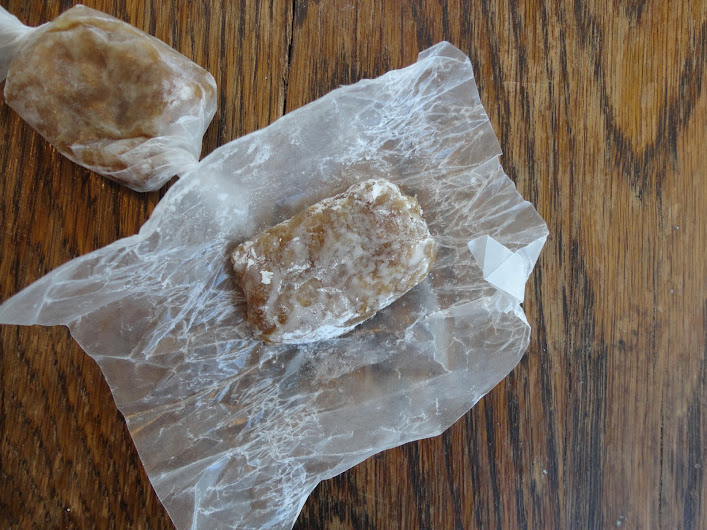 It wasn’t until 1 AM the day I was to enter the contest that I read the rules and information more closely.  To my chagrin, I discovered that not only were they looking for “recipes suitable for family or community dinners” but they wanted you to include an entire aesthetic set-up with props.

Since there were only about five hours left before I needed to get up in order to get to the fair on time to turn in my entries, and I was already sleep-deprived, I decided I wasn’t going to enter it after all.  How could I?  Candy isn’t served at a dinner, is it?  And what in the world would I use for props? I had no idea, and no time to figure it out.

I was crushed.  This was the contest I was most excited to enter and that mattered most to me, because the recipe was special and I’d actually harbored fond dreams of presenting Grandma Joy with a ribbon for her recipe.  But I underestimated the power of my hope.  I do know after almost thirty-two years (yikes) of living with myself, that my hope has great strength and is very hard to kill, if not impossible.  If I want something bad enough, that hope inside me will rise up even after I mentally decide against trying for it, and force me to find a way to make it happen. 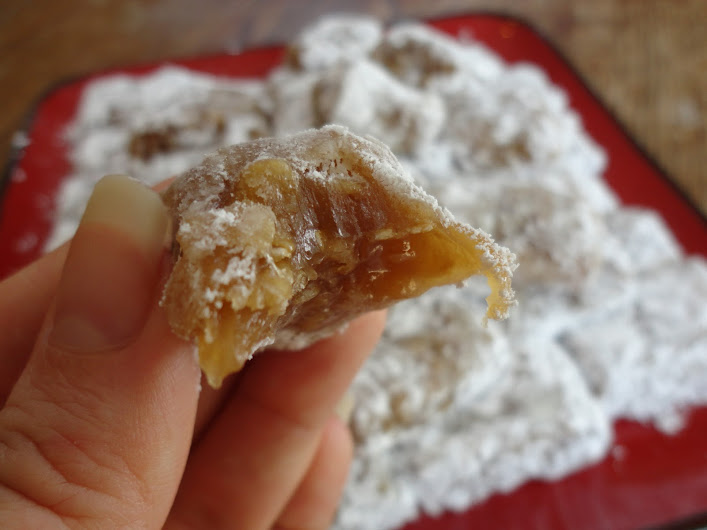 So only a few minutes after telling Dennis I wasn’t going to enter the Heritage Recipes Contest, and should probably just opt out of the pie contest too, that hope forced me to find a way to make it happen.  Maybe candy isn’t usually served with dinner, but I oculd see the judges accepting it because at a big dinner, it might be passed out afterward.  On my second wind, I hustled to the kitchen and piled the candies on a Blue Willow plate because although the plate is new, the pattern has been popular since the 1800s so I thought it would be suitable as a prop.  I searched desperately for any picture of Grandma Joy that I could frame and place beside the plate but couldn’t find one that had the right old-timey feel.  I did find several copies that my Mom made of an old photo of my Great Grandma Millner (her Grandma) and in a crazy act of desperation, I cut one down to fit a frame and stuffed it in there to set beside the plate. Well, I never said anything about the woman in the photo being the Grandmother mentioned in my history write-up.  So it wasn’t even a lie.  I mean, I can’t help it if they just happen to assume the woman in the photo was the one who gave me the recipe, simply because she’s sitting right next to it.

I then experimented with using dried roses and potpourri to round out the setting but it just looked terribly wrong and in the end, decided to use ingredients in the recipe as part of the props–oatmeal in a measuring cup, and powdered sugar and cinnamon in little dishes.  I knew it wasn’t the best, but I thought it was passable.

As I set up my presentation later that day next to the other ladies and gentlemen that entered, oh how unprepared I felt.  This was the first entry I saw and that unfailing hope nearly died on the spot.

Now this lady was prepared.  Miniature cast iron stove with miniature baked Zwieback rolls in miniature foil baking pans and the regular sized ones in front, with a gorgeous display with sunflowers, wheat, miniature enamelware used as backings for old family photos, and a sign over the top!

And here’s my sad presentation by comparison.

I didn’t even have a place mat.  I knew I was doomed.  But still…my hope was there.  Small, but alive.

I was watching the pie judging nearby and would get up and check on the Heritage Recipes contest judging from time to time.  I happened to get up just as they were reading and tasting mine…

It went fairly quick.  They each took a bite of the candy and set it down, reading the history about it and the recipe.  I felt even deeper that it would not place.  There were so many attractive entries…

I got caught up with talking to one of the other ladies that entered the contest and almost missed it when they announced I won third place!  The microphone was so quiet it would have been easier to hear her without it and I moved forward, catching only that they liked my presentation and the taste and history, and mostly how unique it was.

Everyone somehow knew it was me that had won despite no one there knowing my name, perhaps by the look of pure shock on my face, and they all turned to me, clapping.  If I had been alone, I would have been jumping up and down.  But knowing that almost-thirty-two-year-old women are generally more collected and mature, I smiled and nodded  and celebrated with the second and first place contestants.  Then I proceeded to exclaim “I can’t believe it, Dennis!” at random intervals throughout the remainder of the day.  So much for acting my age.

I went back later to see how they had put the winning entries on display and ran into Jane, the first place winner with her beautiful Zwieback.  We took pictures of each other in front of our displays and she sent this one to me by email:

I know I don’t look excited here but I was pretty exhausted by that point, only having had a couple hours of sleep.

She also sent me a picture of the second place entry, which I failed to catch somehow!  These are kolaches. a Czeck pastry (I actually have a recipe for them here, though my fillings aren’t the best):

And here’s Jane with her blue ribbon winner!

So there you have it.  I nearly opted out of a contest that I ended up placing in!  And if I hadn’t entered, I wouldn’t have met Jane, which I count as one of the best things abut my fair experience this year-the ladies I met.  There are definitely times when I regret my decisions, but as for this one, I’m just so happy I went through with it.  I can’t wait to give Grandma her ribbon! :)

If you’ve missed the previous entries in my 2012 State Fair series, you can check them out here:

I have a kitchen addiction and love to collect & share recipes. My passion is baking but I love to cook as well. The only thing I don't like to do in the kitchen is wash dishes, but my husband generally does them for me in exchange for his dinner.
View all posts by Veronica »
← Kansas State Fair 2012 part 2: How I fared at the fair
Kansas State Fair 2012 part 4: Thankful Thursday #83 →