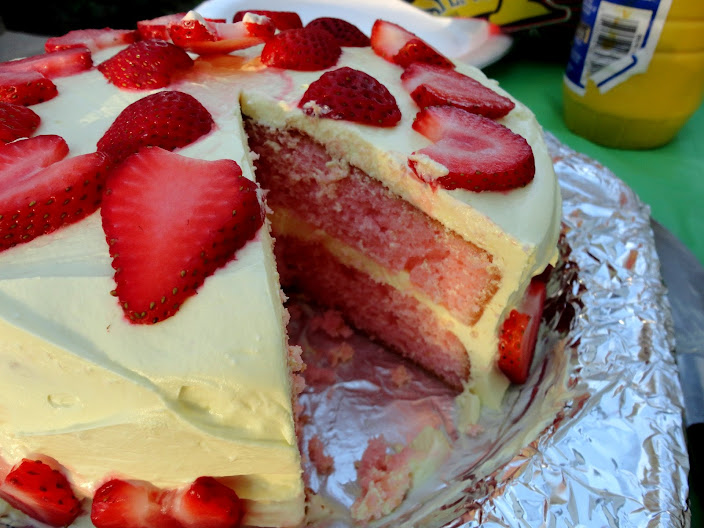 Wheee!  We’re back and boy did we have a blast in good old Abilene.  I think my blues have been cured by some good old Kansas sunshine and fun times.  We did so many things I don’t know if I can even blog about it because it would either be one long blog, or a million short ones, but I’ll see what I can do later on. 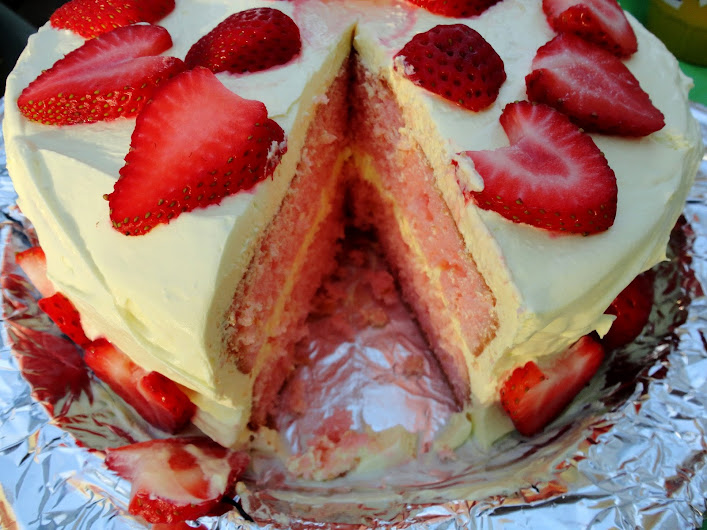 While we were there, we had a cookout with the whole family and I surprised my father-in-law, Al, with an early birthday cake since we were leaving the day before his actual birthday.  Since I was making it in a kitchen that wasn’t my own, and it was hot, I wanted it to be super easy, and cool and refreshing.  This one fit the bill since it’s made with convenience products and is refrigerated and served cold.  Plus, there’s no butter in the frosting so maybe it’s even a little lighter than my usual decadent cakes.  Perfect for summer.  Except for that whole turning on the oven thing, but I baked it at night so that made the hot kitchen not quite as unbearable.

Jessie’s trying to do a sneak attack on the grill!

Everyone loved the cake, but I have to be honest and tell you it’s not even close to my favorite cake.  The frosting is very tart, like lemonade, and I tend to like my cake super duper sweet.  If I made it again, I’d use less of the lemonade mix.  But I did like it, and judging by the reviews I got, it’s totally worth sharing.  It does have a nice strawberry lemonade flavor going on.  Like I said, it’s a great cake for summer because it’s served cold.  The frosting doesn’t get hard when cold like all the butter-laden ones I usually make, so that is nice.  And don’t forget my water bottle trick to make sure your cake is super moist! I taught it to my Mother-in-law while I was there, using her tap water, and she was so excited about it that she didn’t notice I was using her undrinkable tap water until I was done.  So yeah, I tried to poison everyone with not quite crystal-clean well water, but we all survived. lol

(Oh no, I hope Janice isn’t reading this!  She’s a reader in Abilene that I got to meet and I brought her a piece of this cake when I stopped by her office.  It was so cool to meet her, except for the trying to poison her part.  If you’re reading, Janice, I was just joking about the poisonous well water.  *ahem*  But you might want to get checked for fingernail cancer during your next doctor visit.) 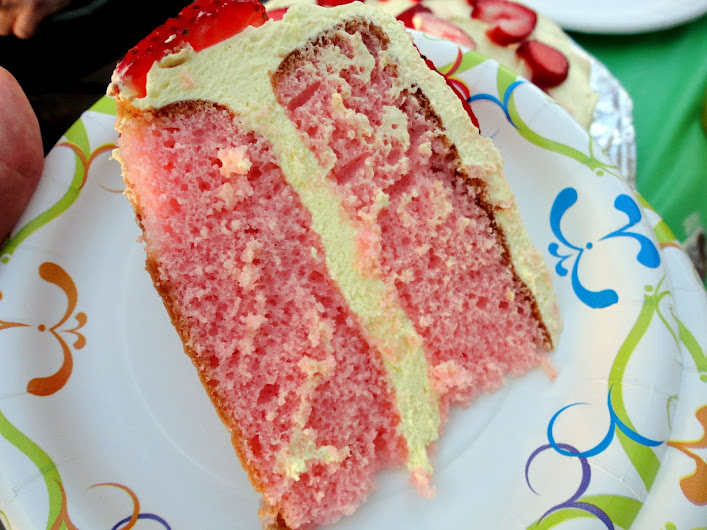 Make cake according to box instructions and bake in 2- 8 inch round cake pans as directed. Turn finished cakes out onto cake racks and allow to cool completely.

Once cake is cool, cream together cream cheese, lemonade and yellow food coloring until smooth. Mix in marshmallow creme and then mix in whipped topping until completely smooth. Level the cakes, and place one layer on a platter, cut side up. Spread about a third of the frosting over the top, then place the second cake layer cut side down on top. Spread the remaining frosting over the top and sides. Slice strawberries and place on the top and sides of the cake for decoration. Refrigerate until ready to serve and serve cold, straight from the fridge.

Disclaimer: No humans or animals were harmed during the eating of this cake.  I believe the reason they don’t drink their water is because it’s hard water, which isn’t really poisonous.

More photos from our evening…

A closer look at the 7 layer dip. I did it a little different this time, putting the tomato layer on top and mixing some goodies into it (I made the tomato layer from this recipe).  I also mixed in a packet of Fiesta Ranch dip mix into the sour cream instead of taco seasoning and it was even better than the original!  I’ve been looking for that dip mix ever since my girl Jaci made a dip with us while we were visiting last year because it is just wonderful and miracle of miracles, I finally found it in Abilene:

I loaded up, so if you’ve never tried this and would like to, just let me know in a comment below, and I’ll draw among the interested parties for a winner of a packet.  It’s so good mixed with sour cream!

Maybe you can tell he likes Coke?

Dennis and his nephew, Carson, played catch after dinner.

Look how studly my man is.  He’s not much for sports but I think the sporty look is good on him. :)

When I met this boy, he was a toddler.  And now he towers 6 inches over me.  Kids are great at making adults feel old! lol

Love country sunsets!  Such a pretty ending to the day.

I have a kitchen addiction and love to collect & share recipes. My passion is baking but I love to cook as well. The only thing I don't like to do in the kitchen is wash dishes, but my husband generally does them for me in exchange for his dinner.
View all posts by Veronica »
← Asian Lettuce Wraps
Thankful Thursdays #75: where the buffalo roam →