Last month, Dennis and I took a contract out on ourselves. 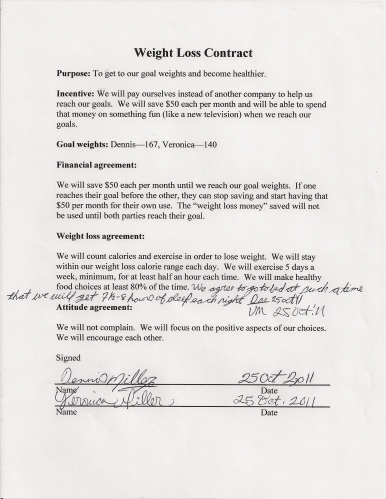 Dennis, with plenty of help from me, had reached his highest weight ever, and I’d packed on 17 pounds since quitting Weight Watchers in May (a whopping 27 pounds since this time last year!).  I know that’s impressive, but I’d prefer to impress with weight loss rather than gain, thankyouverymuch!

For months we had been talking about an idea we’d been brewing, an incentive plan to help us lose the weight together that didn’t include paying someone else for their help.  So when we finally got completely disgusted with ourselves to the point that even fries and cheesecake couldn’t soothe our nutrition-deprived souls, we put everything down in writing and signed it.

With this contract, we are paying ourselves to lose weight!   The money that we would have spent on Weight Watchers (it’s about $50 a month per person), is going into an online savings account each month, automatically deposited just like the WW payment would have been automatically withdrawn.  We will continue these monthly deposits until we both reach our goal weights, and at that point, we are going to use it to buy a new television!  (The one we have is the first thing we ever bought together, thirteen years ago, and the screen has been displaying a discolored the picture for the last eight.  So a new one would be nice!)  If one of us makes their goal first, then the $50 will go to them each month instead of the savings account, and they can use it to splurge on whatever they wish as long as they maintain their weight.

We each agreed to count our calories, exercise five times a week, and get 7 1/2-8 hours of sleep each night.

So far, we’ve each lost about 10 pounds.  Mine was all lost the first two weeks and then I got lazy with counting calories but I’m back on it this week so hopefully I’ll show a loss again.  Dennis has been keeping his end of the bargain with exercise, but I just now for the first time did a strength routine last night (I feel gloriously sore today) and other than that, have only been walking the dog the few nights a week that I’m home early enough to do so.

I’m also a bit sketchy on the 8 hours of sleep, and so is Dennis.  This has been a struggle for us, especially once my schedule shifted to later in the day which caused him to stay up so we could have time together when I get home, and me to stay up even later trying to get things done like I used to after work when I got off at a decent hour.  But a bedtime of 6 AM is just not OK with me!  I hate waking up in the afternoon and feeling like I’ve already wasted the day, and I usually get up after 6 hours of sleep simply because I can’t stand to sleep in daylight.  So I’ve got to work on going to bed after work and doing things in the morning, after sleeping, instead of in the morning because I just stayed up that late.

So we’ve got things in motion!  I’d totally recommend our plan for couples, because you automatically have someone for support, which I find essential during the journey, but I think it would also be a good plan to do on your own as long as you can find some motivation and encouragement outside of yourself.  There is a good health & fitness blogging community out there and if you’re looking for some help, here are a few suggestions:

Skinny Emmy
This is my favorite weight loss blog because Emmy has a really long journey ahead of her and behind her: she started at 455 pounds, is now at 342, and has another 142 to go!  She is such an inspiration, and her posts are always interesting.

Former Fat Guy
Rob also had a long weight loss journey, once weighing 475 pounds, but finished it and now maintains a muscular and healthy physique.  Check his blog for interesting posts on health, nutrition, recipes, muscle building, and weight loss.

Waisting Time
Karen is a reforming yo-yo dieter that blogs her triumphs and failures along the way.  I love her writing style!  Plus, she’s from Kansas too so maybe I’m a little biased for that reason as well. :)

3 Fat Chicks on a Diet!
This site has tons of helpful articles on diets, fitness, food, lifestyle & being plus sized.  A great resource for anybody trying to lose weight.

If you read a weight loss or healthy lifestyle blog, I’d love for you to leave a link to your favorite one in the comments!

And can I just say, I’m so proud of myself for putting a goal weight of 140 pounds?  For some reason I have this idea that 130 is the magic number, despite not having seen it in my entire adult life except when I got type 1 diabetes without knowing it and dropped fifty pounds in three months.  I feel pretty good when I’m 150 and really great when I’m 140 and I know that to get down to 130 would require the kind of life-long deprivation and exercise I could never commit to.  I’ve been to 140 and I think it is do-able for long term if I take it slow and get used to eating less on a gradient.  So, yay me for being realistic this time!  :)

I have a kitchen addiction and love to collect & share recipes. My passion is baking but I love to cook as well. The only thing I don't like to do in the kitchen is wash dishes, but my husband generally does them for me in exchange for his dinner.
View all posts by Veronica »
← Thanksgiving 2011 and No Recipes For You!
You might be a redneck… →