Katie from one of my favorite vegan blogs, Chocolate Covered Katie, announced today that she is going to host an online bake sale to raise money for disaster relief in Japan.  She grew up in Japan so this cause is near and dear to her heart.  I imagine we have all been touched by the disaster in one way or another, and I’m no exception.  I have a good friend that lives in Japan, and also have a co-worker whose family lives there, and while all of them came  out OK, my heart goes out to those who are suffering from loss and devastation because I know how easily it could have affected someone that I loved.

I had so much fun participating in Stephanie’s bake sale for the Leukemia and Lymphoma Society, so I immediately started brainstorming about what I could donate to Katie’s.  I only have two vegan dessert recipes on my blog (Mounds Cake and Black Rice Pudding), and neither would travel very well, so I opted to make something else that would.  Caramel corn!  I took my favorite  Cinnabon Caramel Corn and turned it vegan and I have to say, it’s scrumptious!  I will be offering a full gallon-sized bag of it for Katie’s bake sale on April 5th.  I will give another announcement the day of the bake sale so you can stop by to bid or see if there’s anything else there you’d like to bid on and help raise money for Japan.  If you’d like to donate a vegan baked good, click here to check out the details. 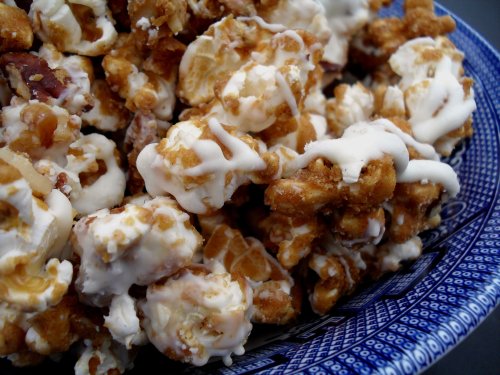 Preheat oven to 200 degrees.  Use an air popper to pop corn into a large bowl.  Fish out any unpopped kernels, then sprinkle the nuts over the top and set aside. In a large saucepan, melt the Earth Balance over medium heat; stir in the brown sugar, agave nectar, cinnamon & salt. Bring to a boil while stirring constantly (I increase heat to medium-high to achieve this faster, then reduce heat back to medium once it’s boiling), then allow to boil for 4 minutes without stirring. Remove from heat and stir in soda and vanilla (mixture will bubble up and become foamy). Pour over the popcorn and stir well to coat. Spread out on a large rimmed baking sheet and bake in preheated oven for half an hour, stirring halfway through baking time. Remove from oven and scatter onto waxed paper-lined cookie sheets. Place white chocolate and coconut oil in microwave safe bowl and heat for 30 seconds; stir. Heat in 15-second intervals, stirring in between, until smooth. This should only take 1-2 times. Using a spoon, drizzle chocolate over the popcorn and put in refrigerator for ten minutes or until chocolate is firm.  Break into pieces and store in an airtight container or Ziploc bags.

*If you can’t find some sort of dairy-free, vegan white “chocolate” in your area, it is available for purchase online or you can make your own.  I used this recipe.  If you use homemade vegan white chocolate, do not melt it (it becomes too liquid and won’t coat the pieces very well).  Instead, chop fine and once the caramel corn is spread on waxed paper lined cookie sheets, scatter it over the top so that the heat from the caramel corn will melt it.  Place the sheets in the refrigerator as soon as the chocolate is on top to keep it from melting too fast or it will drain to the bottom instead of staying on top.

I have a kitchen addiction and love to collect & share recipes. My passion is baking but I love to cook as well. The only thing I don't like to do in the kitchen is wash dishes, but my husband generally does them for me in exchange for his dinner.
View all posts by Veronica »
← Favorite Chocolate Cake, plus tiered cake tips
Vegan White Chocolate →