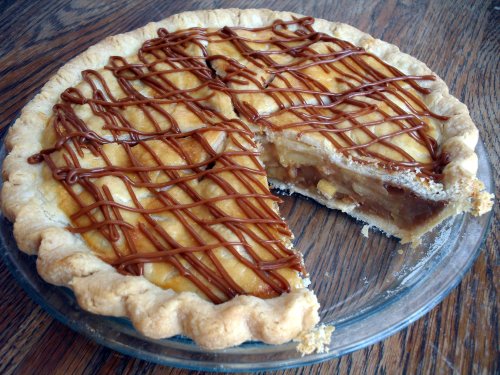 On average, I save about five recipes a day.  Each is saved with full intention of making it ASAP, but most are forgotten by the following day when I’ve found five or twenty more recipes that I just HAVE to try right away.  It’s a never-ending cycle.
This one, however, has been stuck in my head ever since I read it on Laura’s blog two months ago.  It is not one I forgot, but continued thinking, imagining, and fantasizing about.  So when I unexpectedly got the day off on Thursday, I immediately knew how I would spend some of my free time.  Making. This. Pie.
It was worth the wait and all the anticipation.  Honestly, it’s the best apple pie I’ve ever had–even better than the apple pie that has won me local acclaim and an order for 15 of them to serve as the groom’s “cake” at a wedding.  Grandma Ople’s Apple Pie is killer, but this one tops it.  And it’s easier to put together, so that makes it a definite winner.
Personally, I don’t taste the dulce de leche in the pie itself so I like to drizzle dulce de leche over the top to enhance the flavor.

2. Mix together sugars, cornstarch, cinnamon, nutmeg, and salt. Make sure the cornstarch is well mixed in so you don’t get cornstarch lumps in your pie.

3. In a large bowl toss together the apples with dulce de leche, apple cider, and vanilla extract. Add the dry mixture and toss to combine. Set aside.

4. Roll out one of the discs of pie dough and line a 9” Pyrex pie dish with the bottom crust, then brush with the egg white. (Keep the remaining egg white for later use.) Add the filling and spread out evenly. Dot the mixture with little bits of butter here and there.

6. Roll out the other dough disc & cover with the top crust. Cut it slightly wider than the edge of the bottom crust, then tuck the edges under before fluting.

7. Mix the egg yolk with the remaining egg white & brush over the crust. Poke a few holes in the crust for venting or cut out decorations.

8. Bake for 30 minutes. Then turn the temperature to 375 degrees, cover crust edges with a pie shield*, and bake for another 30 minutes or until crust is golden on the bottom and no longer wet and raw looking.

9. Remove the pie from the oven and set on a cooling rack for several hours to set up the filling.

10. If desired, you may drizzle dulce de leche over the top of the pie shortly before serving. Don’t do it too far in advance or the dulce de leche will dry out and get hard. To drizzle it, warm the dulce de leche and either put it in a pastry bag or a ziploc bag and snip a small hole from the tip. Then just sweep the bag back and forth over the pie while you squeeze the bag.

*There is no need for a pie shield if using the recipe for crust in the link above. It doesn’t burn easily. Also, I only needed to cook my pie 45 minutes before the crust looked done, so I removed it and the apples were soft & perfect.

I have a kitchen addiction and love to collect & share recipes. My passion is baking but I love to cook as well. The only thing I don't like to do in the kitchen is wash dishes, but my husband generally does them for me in exchange for his dinner.
View all posts by Veronica »
← King Ranch Chicken Casserole
Honey-Garlic Wings →