*I don’t want to share the name of my nemesis here b/c she is actually a very nice woman (I met her the first year I entered the fair, 2009) and don’t want anyone to connect a negative feeling with her name, but I will tell you her initials are CW.  How funny is that?!

How could I not be disappointed, right?  I mean, I baked twenty-four different banana bread recipes.  You can see them all here if you don’t believe me–complete with every recipe I used. 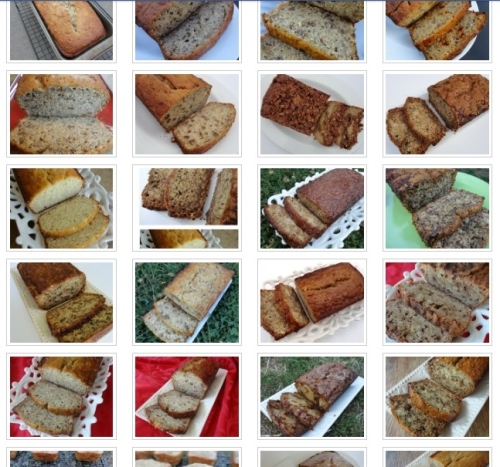 I froze a piece of bread from each loaf.

And at the end of the baking, Haus and I tasted each bread to see which one was the best.

We used grading papers and agreed on one.

Then I couldn’t resist, and baked three more loaves.  With the last loaf, the recipe for which not coincidentally came from my Foodie Mama who has won multiple blue ribbons for it (yes, I was kicking myself for not making this recipe FIRST since I had it all along (hello, obliviox here!) and could have had a much shorter journey to find the best recipe), we decided we had finally found the best banana bread recipe.  And I made it for the fair.

Well, guess who else didn’t place?  Yup, CW.  So that is a big consolation.  If the woman who has won multiple blue ribbons and even BEST IN SHOW for her banana bread didn’t even place this year, could my banana bread really be so unworthy?

While I won’t get my grading papers until Sunday (which means there might be a part 6 to this series next week, if the comments written on the grading papers are degrading enough…because really, only the mean comments are fun enough to share! lol), I have a few insights into why my banana bread didn’t place.

First, I put a lot of butter on top prior to baking.  This created a lighter stripe down the middle where the solids settled, and made it looked like it might be under-baked.  Judges won’t even taste something if it isn’t fully baked, so this could be a possibility.  I know it was fully baked as I stuck a toothpick in it, but they might have judged otherwise based on appearance.

Just some of the banana breads. Mine is third row back, second from the right (it’s kind of dark colored). CW’s entry is right in front of mine, a little to the left.

Second, and you might not believe this since I took so much time to find the perfect bread, but I didn’t buy my bananas early enough! I usually let my bananas ripen for at least a week, preferably two, before making them into bread because the more ripe they are, the more banana flavor you get.  I bought mine only five days before I had to bake the bread so I put them in a paper sack along with a tomato so the gas would make them ripen faster, and they were just barely speckled after five days.

Third, the judges might have been thoroughly fed up with me for refusing to listen to their advice of greasing the bottom only of the bread pan.  The first year they wrote the advice kindly, saying that the crust would be more tender if I greased the bottom only of the pan.  The second year they put it in caps with an exclamation point…or at least I remember it that way but I tend to exaggerate things, even in memory.  In any case, the advise seemed to have turned into a command.  But dude, I did try and my bread stuck and looked totally terrible and mangled by the time it finally came out.  Plus, the crust was totally hard and definitely NOT more tender.  Maybe I need a better pan?

Fourth, I think the judges might have contracted too-much-banana-bread-itis.  There were a lot of banana bread entries this year, possibly more in this category than any other.  And I know from experience that after tasting more than 15 different banana breads, they all start to taste terrible.  I nearly puked while doing my own taste test and started grading all the banana breads with C’s and D’s after a while.  This year no one got a blue ribbon in the banana bread category.  The judges only awarded a 2nd and 3rd place ribbon.  So I think my assumption is a fair one–they got the itis.

So there you go.  There’s probably a lesson to be learned here.  Like maybe don’t work so hard to accomplish a goal that doesn’t really matter?  Don’t lose sleep over something that isn’t going to improve your life because in the end, you might not actually accomplish your goal?  But hey, I had a lot of fun with it, and it’s a story I love to share because people always get a kick out of hearing I made 28 banana breads to find the perfect one.  Now I can add…”and then I didn’t place at all!” which kind of makes the story even better.  :)  I don’t have any regrets.  Well, except that I have definitely lost my taste for banana bread and may never bake another loaf again.  lol

Here’s to celebrating life’s victories…and it’s failures.  Sometimes they are just as fun.

I know you’re ready for the winning recipes and those will start next week!  Thanks for sharing in my happiness for this year’s successes and laughter over  the epic failures.