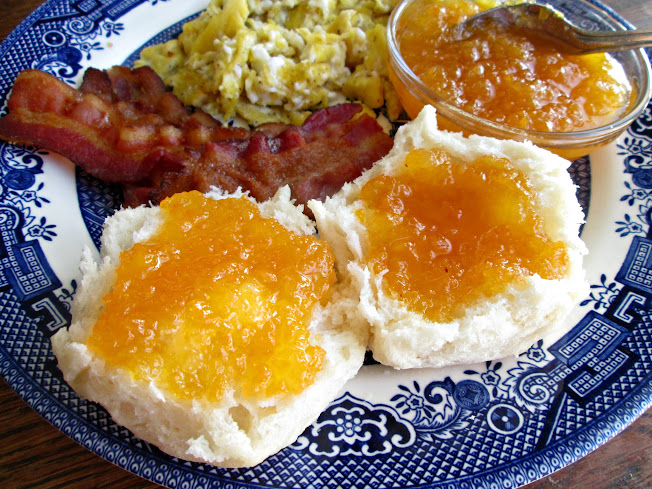 This is yet another winner from my Foodie Mama’s cookbook (I think she still has a few available, just let me know if you’re interested) that she has not only won a blue ribbon for, but included it in a coffee cake recipe and won a blue ribbon for that as well. She’s pretty much unstoppable. :)

I don’t know what to tell you about this jam other than it’s really good! The pineapple isn’t very pronounced, but does decrease the intensity of the apricot a little and make it more exotic.  If you do adult Easter baskets like our family, this would be a wonderful addition.  A certain Mother-in-law may be getting one from the Easter bunny this year! :) 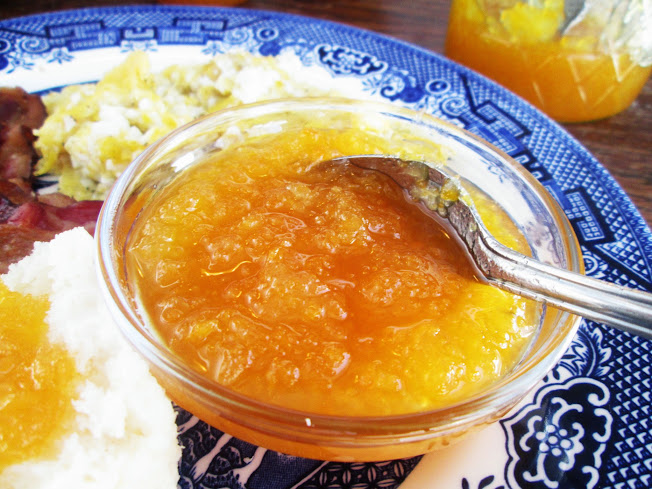 Soak apricots 3 hours in warm water. Process in a food processor with blade attachment until finely ground. Place apricots and the undrained pineapples into a medium pot. Add sugar and cook rapidly until thick, stirring often. Pour into prepared jars. Insert one cinnamon stick to each jar and processes with simmering water bath about 5 minutes. Cool jars completely.

Veronica’s notes: I didn’t measure my soaking water, I just put the apricots in a very large bowl and covered them with twice as much water as the line they came to in the bowl. I let them soak for 8 hours, just because I was too busy to get back to them any sooner, and then drained before processing. I also did my canning the cheater way I learned from Suzie and Erin, which doesn’t include processing the jars in a water bath. I just put the jam in the sterilized jars and screwed on the caps and the heat from the jam sealed them all, as it always does. I only do this with jams or cranberry sauce, basically stuff with lots of sugar in it (which if you didn’t know, is an incredible preservative), and have never had any go bad within a year, though I’m not making any guarantees here and this certainly isn’t FDA approved. There’s my disclaimer so try it at your own risk. :) And perhaps it was because I didn’t process my jars in a water bath and reheat them once the cinnamon stick was inserted, but I couldn’t detect any flavor that the stick imparted so would likely just skip that ingredient unless I was going to can them properly. I might even try stirring a little cinnamon directly into the jam next time, which sounds so lovely to me.

Recipe source: Splendour In My Kitchen by Marina Castle

I have a kitchen addiction and love to collect & share recipes. My passion is baking but I love to cook as well. The only thing I don't like to do in the kitchen is wash dishes, but my husband generally does them for me in exchange for his dinner.
View all posts by Veronica »
← Daddy’s Boy
Joshua’s Birth Story →