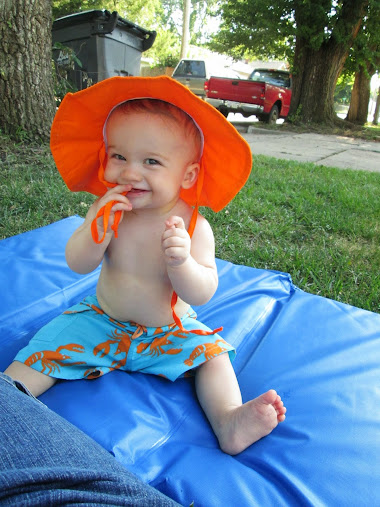 Joshua is quickly closing in on 9 months old and it seems like he’s grown up so much since I last updated. He’s got his first teeth, started sitting up, and crawling! He’s been working on his crawling for a while and finally started legitimately crawling last week, though he still does a lot of scooting so it’s not totally smooth yet.  Here’s his first stage of crawling – the rocking motion lol.

Then he started doing this thing where he’d push off with his legs and let his arms go back at the same time so he was kind of like a grounded super-man, flying on the bed, which seemed the safest/softest place to practice while this was part of his technique.

And here’s a 6-second video showing his legit crawl, though he’s still not super smooth with it.

I was using mats to let him practice on the floor (got four of them at a garage sale for $1 each) but there wasn’t much room for him to get around before hitting a piece of furniture, so we put our coffee table in storage and put in a ghetto play yard. You can spend $100+ on a baby gate to create a safe (and attractive) area for baby to play in, but if you don’t have that kind of dough, here’s the $15 alternative. Blow up pool! Thank you, Pinterest. :D 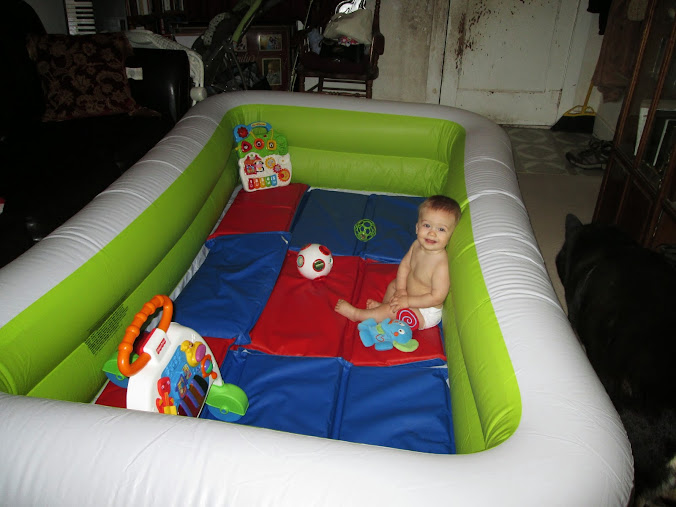 Here’s a video of him enjoying his time in his padded cell:

It takes up the entire living room, though, so the second day after we put it in I was already propping the pool on the couch and was letting him crawl directly on the floor. Of course he immediately threw himself head-first into the handle on a drawer of the entertainment center for the tenth time, reminding me why I’d thought the pool was such a good idea. Here he is enjoying his floor time with the pool as a recliner instead of a safety net. If you look close you can see the red mark where he hit his forehead. 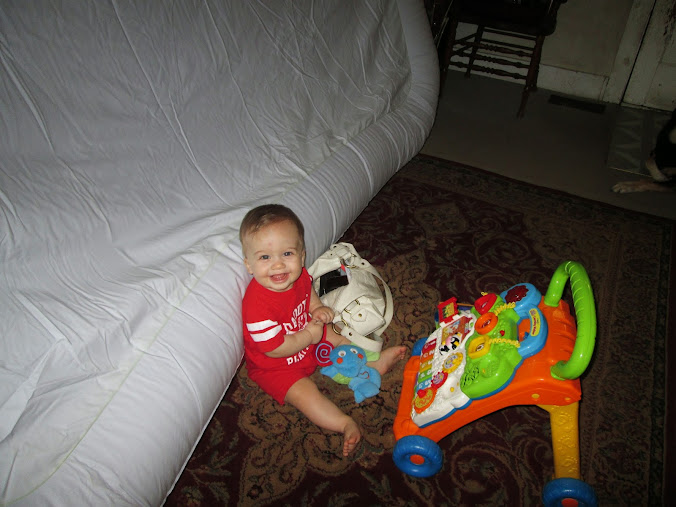 It’s hard to catch his teeth in photos but I managed it in this one – you can just see them on the bottom. 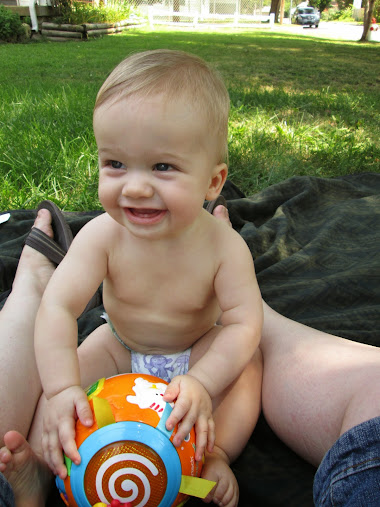 Oh yeah and he can sit up on his own now too.  We often find him sitting up in bed now when he wakes up and for some reason, it makes me so sad. My baby can sit up without my help and can stay there without me hovering to catch him if he starts leaning and topples. :( 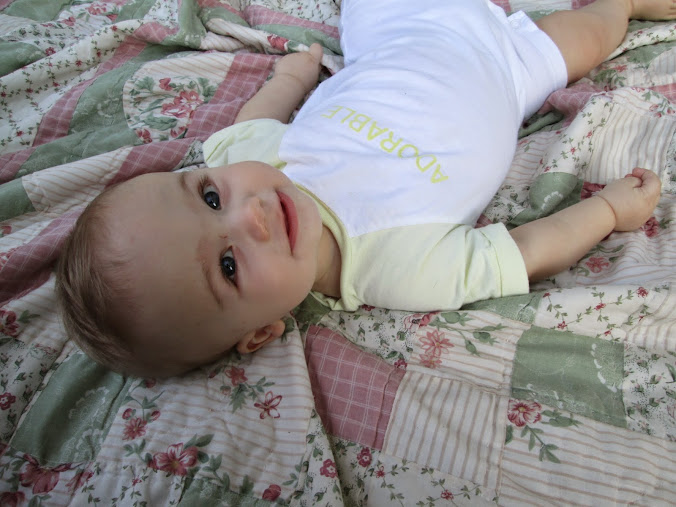 In other news we finally moved beyond veggies & fruit and he’s had his first scrambled eggs and yogurt.  Thankfully he hasn’t had an allergic reaction to anything so far.  I think eggs are his absolute favorite but they are also the messiest thing I feed him and they dry on so I pretty much have to give him a bath every time I feed him eggs.  I don’t know how he manages it, but eggs pretty much coat every inch of him by the time he’s done, even inside his diaper and on the back of his head. Babies are magic when it comes to making messes. 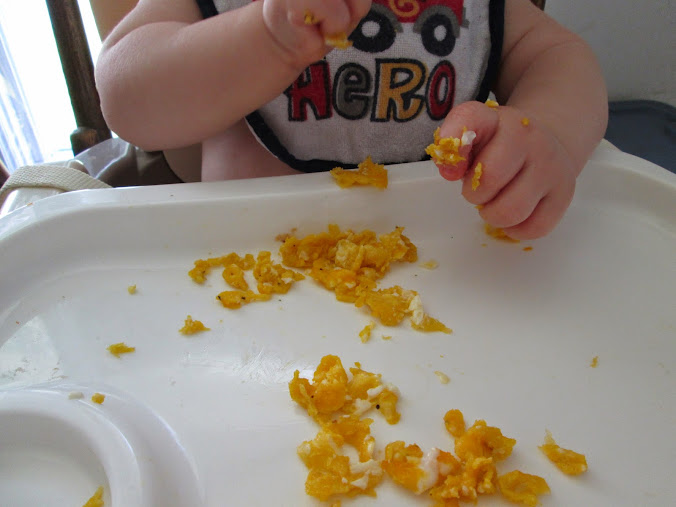 The kid loves his Dad and listens to him so intently when he’s talking – I love it.  But he’s started saying “Mamama” when he’s upset, like he’s calling me, and has been doing it long enough I’m tempted to say it’s his first word. No “Dadada’s” yet. 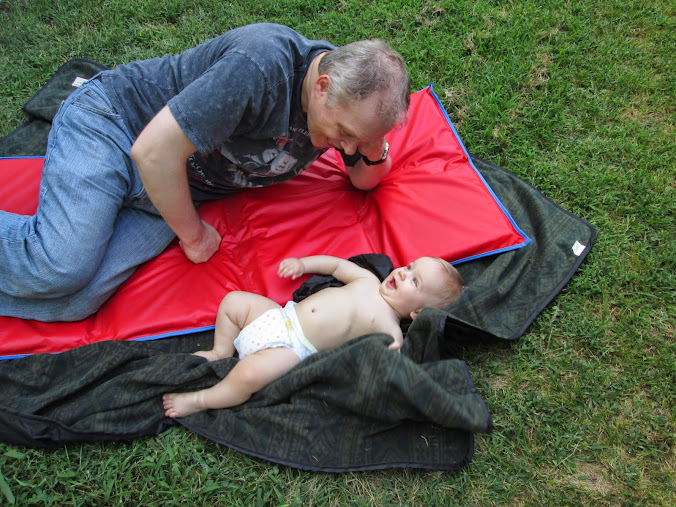 I’ve been enjoying my boy and been caught up in the busy-ness of summer, so by the time I return to update again, he could be a year old! Blows my mind.  Where does the time go?  I don’t know, but I’m enjoying every minute of it. 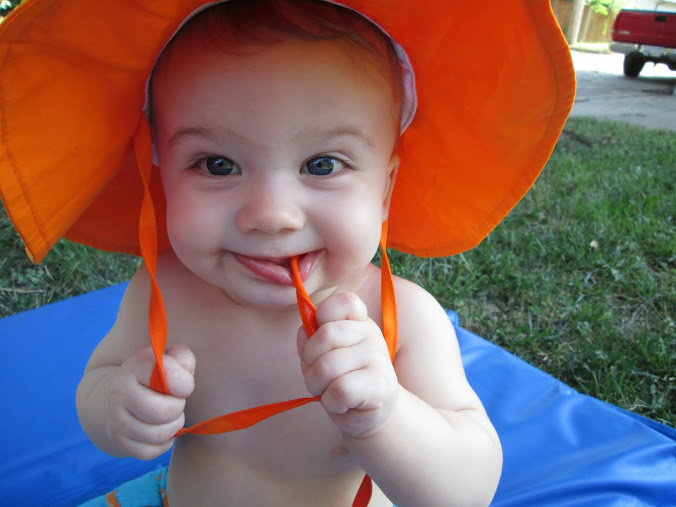 I have a kitchen addiction and love to collect & share recipes. My passion is baking but I love to cook as well. The only thing I don't like to do in the kitchen is wash dishes, but my husband generally does them for me in exchange for his dinner.
View all posts by Veronica »
← Banana Bread Cockaigne
Cinnamon Freud Banana Bread →