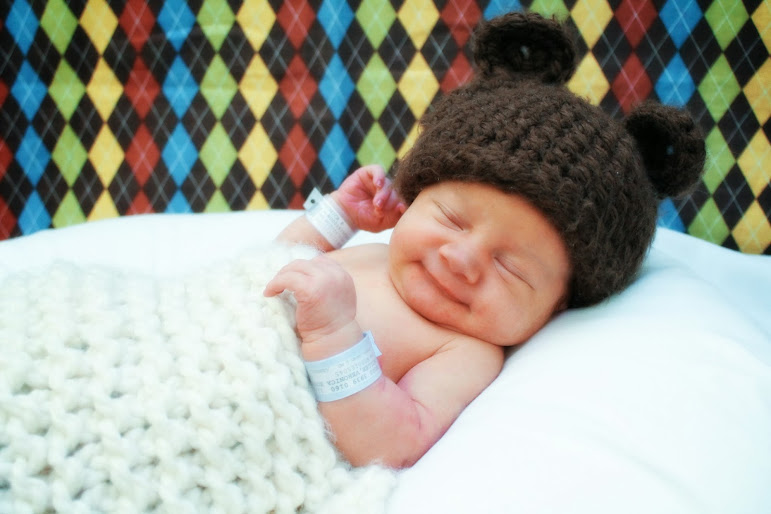 I wanted to post this Monday to replace my weekly pregnancy updates, but…yeah.  First time Mom who got four hours sleep the first week after her son was born…I think you understand.  And thank you to those whose blogs I’ve neglected and who continue to visit mine – I will return as soon as I get a routine established that allows a bit of time for blog reading.

Joshua’s first week was such an emotional roller coaster.  My water broke two weeks , two days early and after the initial shock wore off, it’s been huge highs and huge lows.

As I was falling deeper and deeper in love with this new little man in my life, he was getting sicker and sicker without me realizing it.  Joshua was not doing well with breast feeding and was losing weight so I went into the lactation clinic across from Wesley, which was free for me since I delivered there.  The  nurses were alarmed at his glow worm coloring (we knew he had jaundice but couldn’t tell how bad until we were outside our home with different lighting).  When they weighed him he had lost a pound and an ounce in the four days since his birth, which was another red flag that our little boy was not doing well at all. 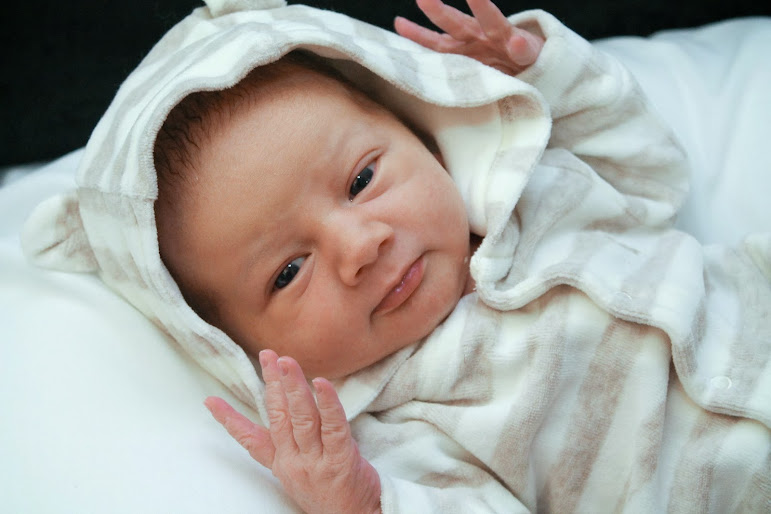 We went immediately to our doctor to get his bilirubin tested and it came back at 33, which is critically high.  We had to return to the hospital and admit our precious newborn to the NICU, and they told us he may have to have his blood replaced several times if they couldn’t lower his level quickly.  I was devastated and assumed responsibility since he might not have gotten to this point if I had been willing to supplement with formula.  I thought I had been doing what was best for him, and almost killed him instead.

The NICU isn’t set up for parents to stay there, unless you want to sit in a chair all night, and it was so awful to leave our son after only having him for four days.  He received the best of care, but that didn’t help the longing in my heart to have him home. 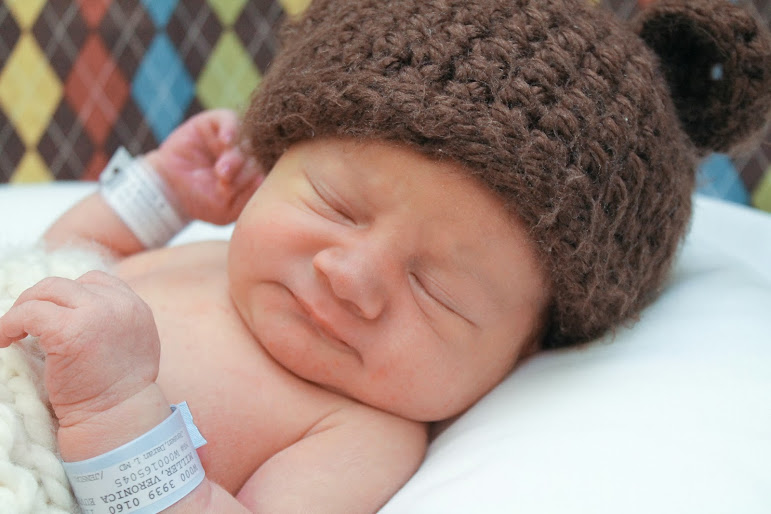 After two days under UV lights, we finally got to hold him again when his bilirubin was low enough and the lights were removed.  Saturday night we got to move into a family room with him and it was pure bliss having our baby with us again, even if it wasn’t at home.  And Sunday we got to take home a much fatter and healthier baby!  I took this video at the hospital while Dennis was gone to take Jessie for a walk.

I wasn’t the typical weepy pregnant woman, but I’ve made up for it in spades this week.  Even though my tears have been mostly justified, I cry at anything that makes me happy or upset in any way.  Now I know how my Dad feels – after his stroke, everything makes him cry.

But now that we have our little one home, what makes me cry the most is how wonderful my husband has been.  He has changed so much since Joshua was born.  I didn’t think he could improve, because he was as close to perfect in my book than anyone has a right to be, but he’s become even more perfect than I could have imagined.  He has been my rock, always leading us to prayer during the hard times last week, holding and comforting me when I had to sob, and loving our son so much it hurts me in a good way.  I didn’t know how he would be after having a kid he took 45 years to feel ready for, and I have to say he’s surprised me in the best way. 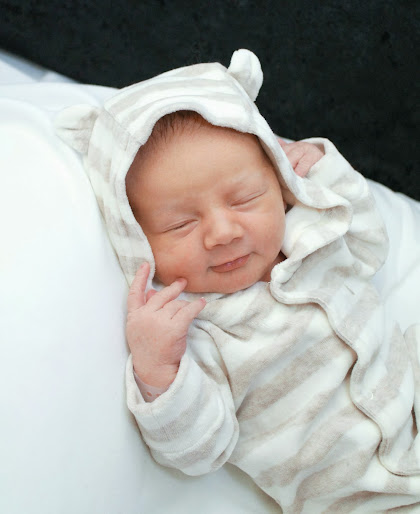 He was beside me during the delivery, pushing one of my legs back (knee towards my head) while a nurse did the other with every contraction, giving me leverage to push against.  He said it was amazing to watch another human come out of me and it just makes me weep to think about how he talks about our son with pride, describing how cute he is when he did something, etc.  Dennis never thought any other kid was cute, so this is a huge deal.  He actually loves to hold him!  I know that seems like it would be a given, but this seems very profound for a guy who has only held babies a couple times in his life (his nephews, and probably because Joan made him – lol).  He even thanked me for Joshua, because if it weren’t for me, he never would have had children, and now he’s so glad I changed his mind over the years.  I can’t tell you how happy this makes me.

Yesterday was a big day for me, because it was my first day alone with Joshua.  Dennis, the baby-whisperer who I have totally relied on as a partner in figuring out parenthood, had to return to work because he’s already a week behind for his supervisor training.  I was so nervous.  I have been feeling really inadequate and inept as a mother, and this also left me in tears, but I prayed to God through them Sunday night as I fed Joshua, asking for help as I faced motherhood alone. 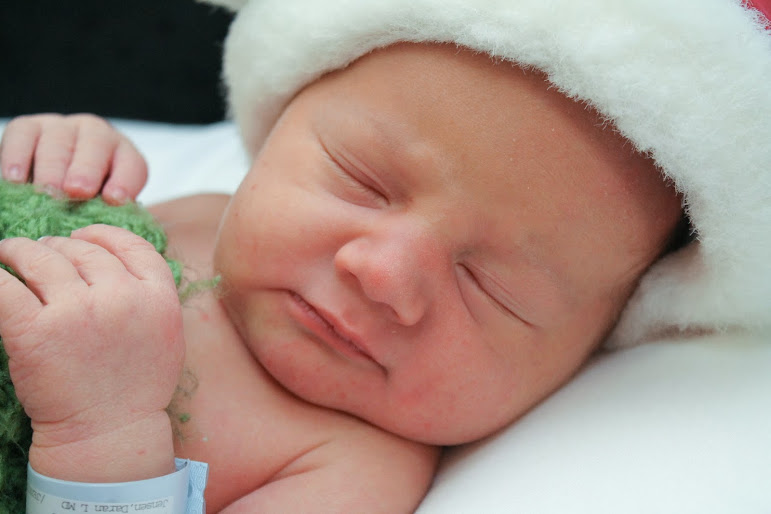 Well, I only had to be alone at home, because God sent me Mom to go to Joshua’s doctor appointment with me and to mail a package, and Dennis took part of his lunch to meet me at the lactation clinic (and no, I didn’t ask him to.  He has been so supportive of me trying to breast feed, and supportive of our family in general, I just have to cry!).  Everything went so smoothly, it helped boost my confidence immensely, especially how well it went at home without my rock.  (Although of course I was leaning on God, an even bigger rock than my husband.)  Joshua ate and slept well, and I managed to get the dishes and several loads of laundry done.  I’m gaining ground! :)

Maybe I won’t be so terrible at this motherhood thing after all.

I have a kitchen addiction and love to collect & share recipes. My passion is baking but I love to cook as well. The only thing I don't like to do in the kitchen is wash dishes, but my husband generally does them for me in exchange for his dinner.
View all posts by Veronica »
← Thankful Thursday #121: happy Thanksgiving!
Merry Christmas! →