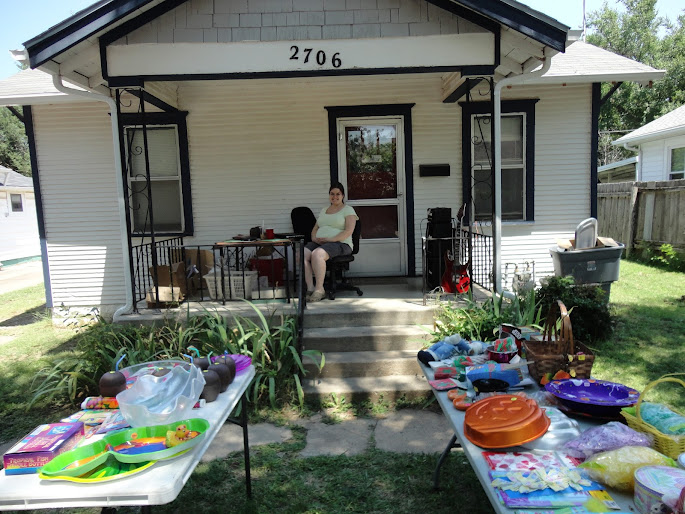 We had a garage sale last week and let me tell you, I never want to have another one again! We’ve done them twice before, but this one was bigger and more tiring, especially since we did it in the front yard and had to carry out tables and unpack tubs/boxes every morning and then put it all back every night (I continually refilled the tables as they emptied, so there was never less).  Not to mention the lack of sleep – there was so much to do we both got only 2-3 hours the first two nights of the sale. 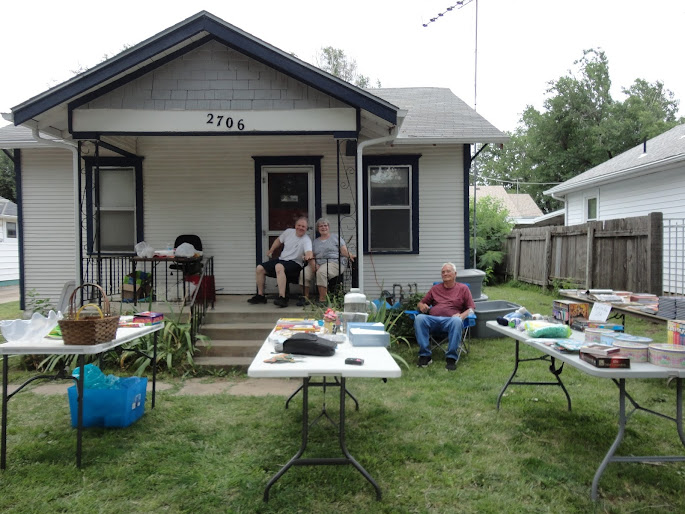 My parents-in-law came the first day and they were a godsend! Phyllis made us lunch, and made extra for me to take to work. I had to go to leave for work at 2 and they helped Dennis pack up that day, and helped us sell a lot of stuff too!

Every physical demand seemed ten times harder than before I was pregnant, and it was frustrating because I’m used to being able to push myself to do what needs to be done, no matter what.  I had to let Dennis do more than his fair share of the work involved (lots of heavy lifting, which is what was hardest for me, and what I’m not supposed to be doing anyway), and I hated it. I could always do a my share of hard work before being pregnant and it’s hard to accept I can’t do it now. 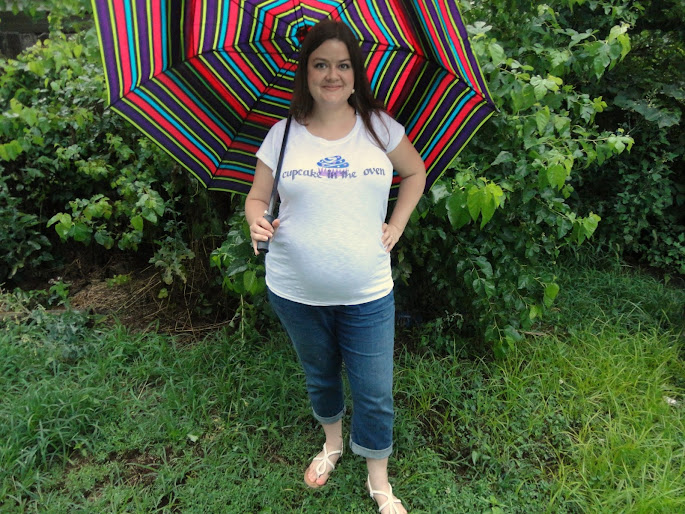 The good news is that we both survived, and sold a ton of stuff.  The reason we had the sale was to get rid of enough stuff that we could rearrange our house so that we could completely empty out the office and turn it into Joshua’s nursery.  The hardest part is now done-hallelujah! 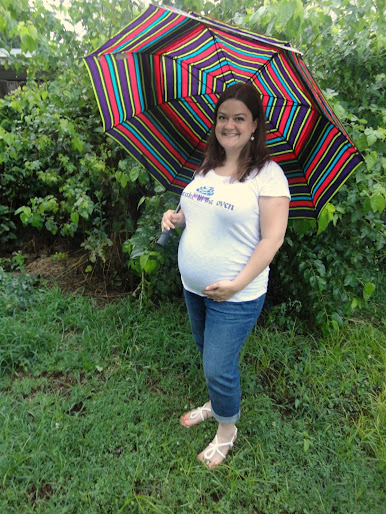 It was also a nice opportunity to see some friends who I haven’t seen in a while (I’m sort of a recluse, don’t tell), and to meet a blogger friend, Melissa of My Recent Favorite Books!  I think she found me through another mutual blogger friend, Marsha, The Better Baker, and it wasn’t long before she realized we were both in Wichita.  She also delivered a hug from Marsha, who she had told about our meet-up, which was so sweet.  It was so nice to meet you, Melissa!! 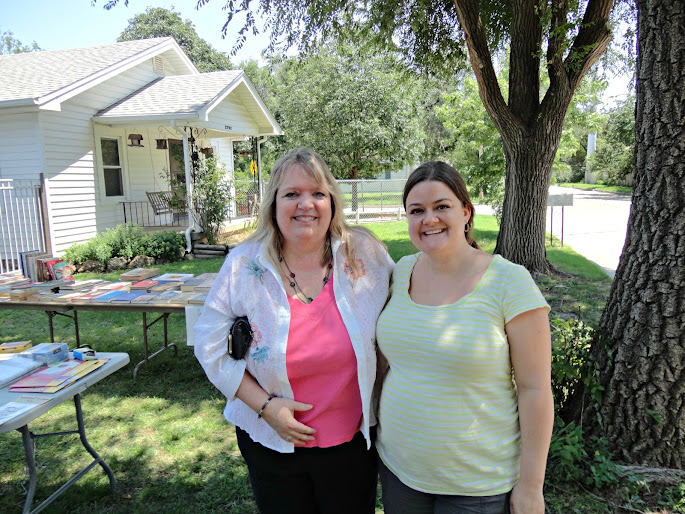 Now that we’re done with step one of Battle Plan: Getting Ready for Baby, I’m really eager to finish the remaining steps so that we can get the new furniture set up in the nursery.  I know we still have 19 weeks (if he comes on time, anyway.  Yeah right, right?) to get ready, but I’m so anxious to just have everything done now! 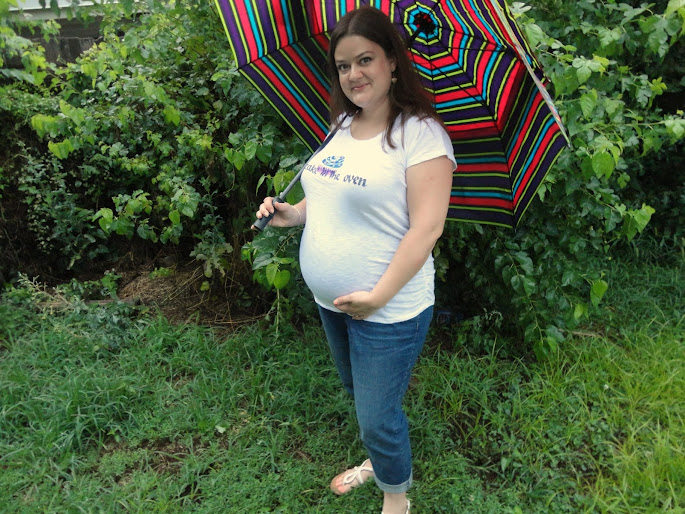 I will definitely be taking pictures of our progress but won’t share them until the nursery is finished because if I showed you the current state of the office/nursery, you would have a heart attack and die, and I would die of shame and embarrassment.  I know you’re imagining something really bad, but believe me it’s even worse than that.  Now you’ve got an even worse picture, and let me tell you, you’re still nowhere close to how bad it is. I promise I will show you eventually, but only when I have the finished room to show you so you won’t question our ability to raise a child without him being crushed beneath an avalanche of stacked papers and books and laundry. 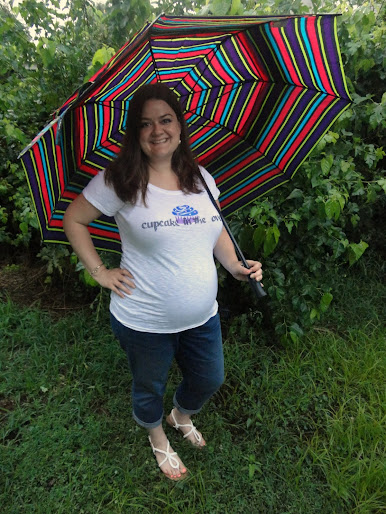 I know you’ve been eying my shirt, so here’s a closer look: 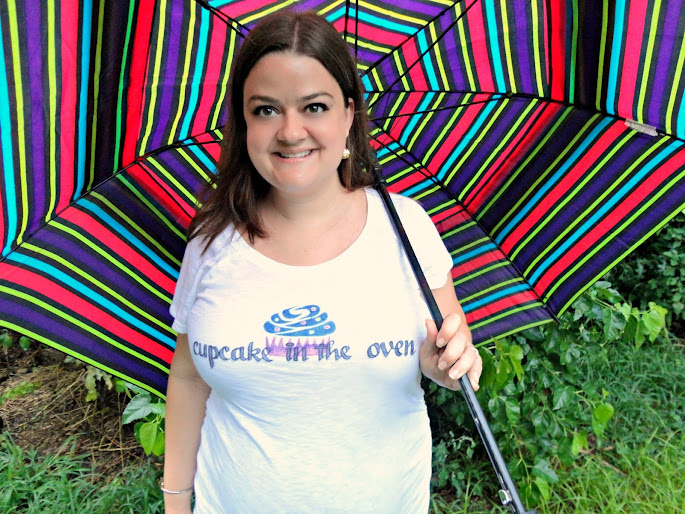 My friend, Tara, the one who pimped Den’s guitar (and won a 2nd place ribbon at the fair for it) and fixed the stain in my jeans by turning it into art, did this custom artwork for me!  I so love it! (I just looked at the old post with Den’s guitar in it, and thought it was funny/cool that I’m wearing the Heart of God bracelet in these pictures (and I think last week’s too) that I also pictured in that post!)  I now have a cupcake shirt to deliver cupcakes to my customers in.  :) Thanks Tara!

Oh and I’ve been doing good on the temper tantrums, or at least haven’t freaked out to the degree I did last week.  In fact, one Friday morning shopper who arrived while we were still setting up and arranging things, asked, “How do you guys get along so well?”  After last week’s meltdown, this was incredibly encouraging. I must be on the road to recovery. lol.  And the answer to her question?  Jesus is our foundation. <3

P.S. I can’t see my feet when I look down any more. I’m not sure how I feel about this.

I have a kitchen addiction and love to collect & share recipes. My passion is baking but I love to cook as well. The only thing I don't like to do in the kitchen is wash dishes, but my husband generally does them for me in exchange for his dinner.
View all posts by Veronica »
← 20 weeks: hissy fit time
Special Egg Salad →