I’ve used this picture of my Grandpa in his stolen pink hat several times on my blog, because it just cracks me up:

I bought this hat in 1996, along with a matching beach bag, and had planned to be totally cool wearing it on the “beach” (aka at the swimming area at El Dorado Lake) that summer.  Then Grandma and Grandpa came to visit, and he immediately confiscated it on sight.  I found him wearing it one day and just didn’t even know what to say.  He told me he was taking it back to Joplin with him because it made a great sun hat.

I was so mad at him, but what are you supposed to say to an elderly mad man that wants to wear your pink hat?  I was half amused, half furious because he didn’t even ask if he could have it, but in the end I found it more hilarious than anything.  I’m so glad I caught this evidence of his thievery on camera for you guys. LOL!

I never saw this hat again until we visited their place for the funeral in March.  As you may have noticed from how he packed Becky with food, he had a hoarding problem, and the house was almost impossible to navigate.  The back bedroom was stuffed with boxes of vitamins (Grandpa was a health nut) and my littlest sister, Lacey, went back there with Danielle to go through the boxes and take what she wanted (she’s the only health nut left in the family, and Uncle David had given her permission for this). 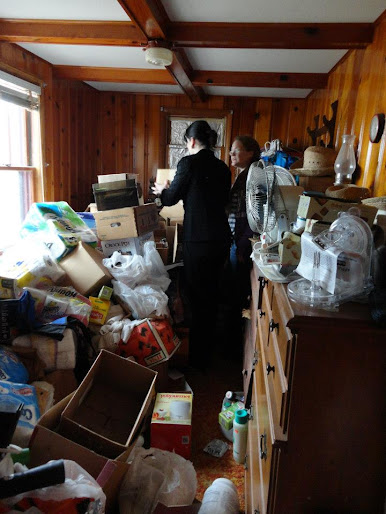 See the hat to the right of Lacey and Danielle?  It’s hard to tell but that’s actually a stack of several hats, and I noticed some pink in the stack (it was already gone by the time I took this photo).  I asked Lacey to see if that was my sun hat and sure enough, we had somehow managed to find it! 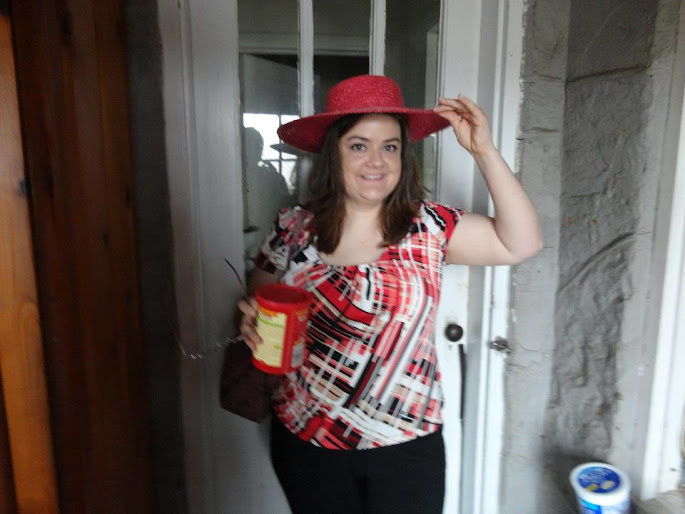 I no longer cared about the hat for the sake of wearing it to the beach (I’m way too uncool for that now), but the hat had taken on a sentimental meaning to me, knowing it had been worn and loved by my Grandpa.  Not sure if I’d ever have a reason to wear it, I took it back home to Wichita.

Then my Aunt Ruby invited me to her second annual garden party and told me the theme was “hats” and there would be prizes for best, most original, and etc.  I knew immediately I had to wear Grandpa’s hat!! 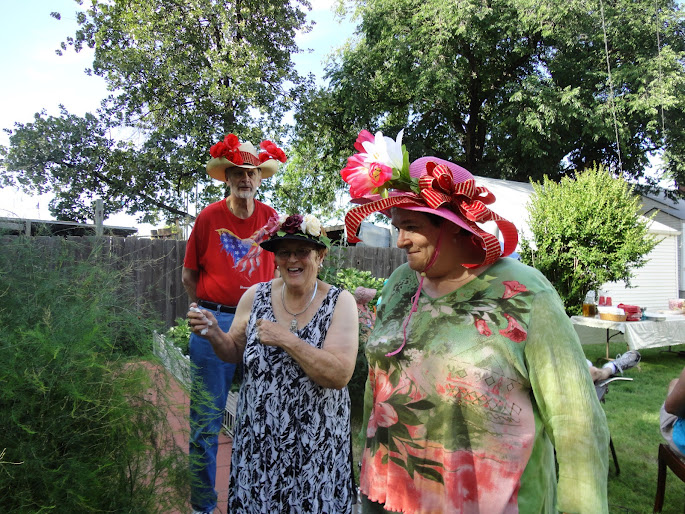 Aunt Ruby (middle) giving a tour of her garden to some of the guests. These two both ended up winning 1st and 2nd place for “most original” hats, and I think they deserved it! :D 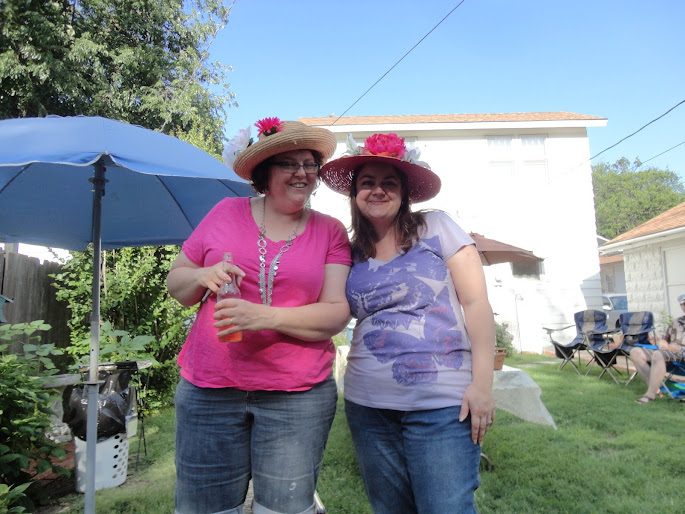 With my cousin Racine. I added some flowers to my hat to spiff it up, as did many other guests there! Great minds. 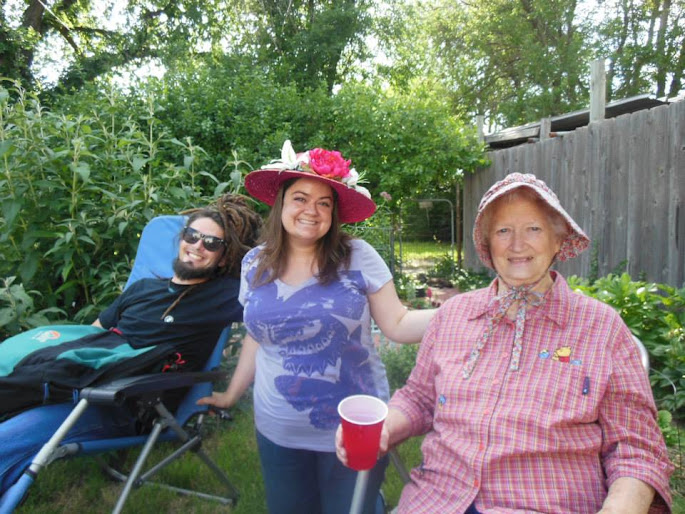 With cousin Michael (he’s so cool, he has dreads down to his butt and often ties them up on top of his head in summer) and Aunt Nadene wearing Grandma Davis’ bonnet–that’s one old bonnet! 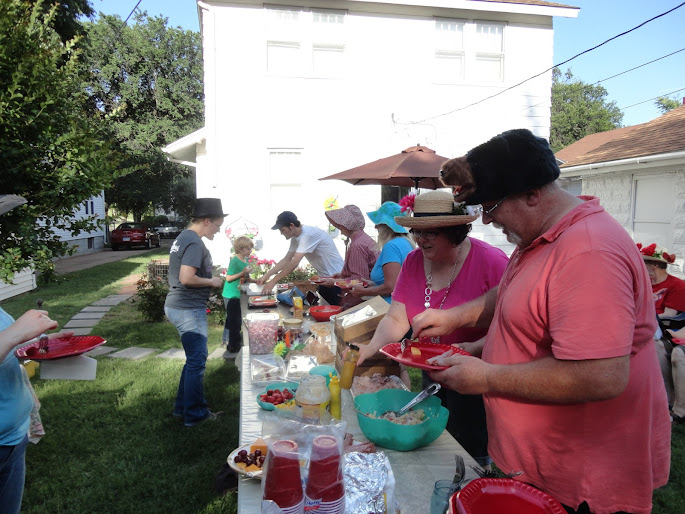 I didn’t photograph all the hats, unfortunately, but I think Owen was the only guest who didn’t wear one-so fun!

I ended up winning first place for “most beautiful” hat!  I can just imagine Grandpa’s big amused smile seeing me win for the hat we both stole from each other. :) 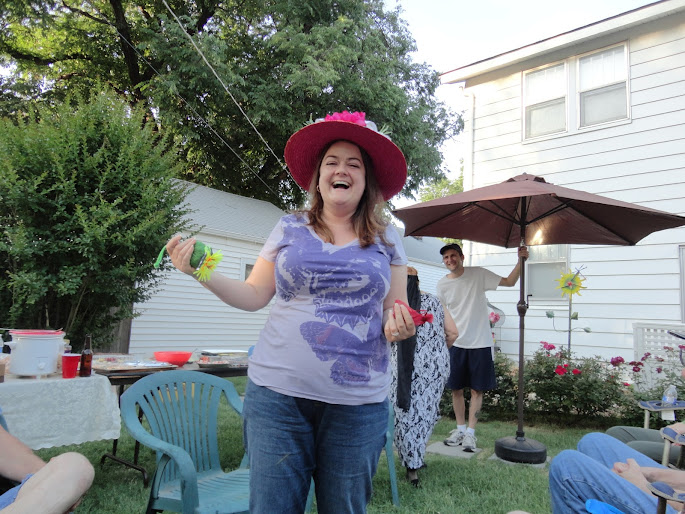 With my reusable shopping bag and brooch I won for most beautiful hat.

I have a kitchen addiction and love to collect & share recipes. My passion is baking but I love to cook as well. The only thing I don't like to do in the kitchen is wash dishes, but my husband generally does them for me in exchange for his dinner.
View all posts by Veronica »
← 15 weeks
Thankful Thursdays #109: the people God gave me →