Ever since my blogging buddy, Faith, announced that she’d gotten a cookbook deal, I’ve been anxiously awaiting its release.  Pins and needles, I tell you.  The day finally came and her cookbook, An Edible Mosaic: Middle Eastern Fare with Extraordinary Flare, is now available for purchase on Amazon and Barnes & Noble!  I’ve been following Faith since I started my blog and it’s been pretty surreal to watch her blossom and become so successful, eventually publishing her very own cookbook.  I’m so thrilled for her!  It is an incredible thing to fulfill your dreams.

From the title of her book, you may have guessed that Faith is from the Middle East.  Well, Faith was born and raised in America!  After getting married, she spent six months living in the Middle East where she fell in love with the culture and cuisine. Subsequently, she returned four more times for visits, each time delving deeper into the cuisine and deepening her passion for and appreciation of the region.  Recipes in her book are authentic Middle Eastern (taught to Faith mostly by her mother-in-law, Sahar), but streamlined just a bit for the way we cook today, with unique ingredients demystified and cooking techniques anyone can follow. If you didn’t grow up eating Middle Eastern food, it can be a difficult art to master; Faith understands that, and explains complicated dishes in an approachable, easy-to-follow way.

An Edible Mosaic contains over 100 Middle-Eastern recipes with a focus mainly on dishes from the Levant, but also a few recipes from other areas of the Middle East.  As part of the virtual book launch party, I’m joining with other bloggers to announce her book’s release and share  her recipe for Saffron Rice with Golden Raisins & Pine Nuts from the cookbook (click the launch party link to enter all the giveaways from sponsors on Faith’s blog!). 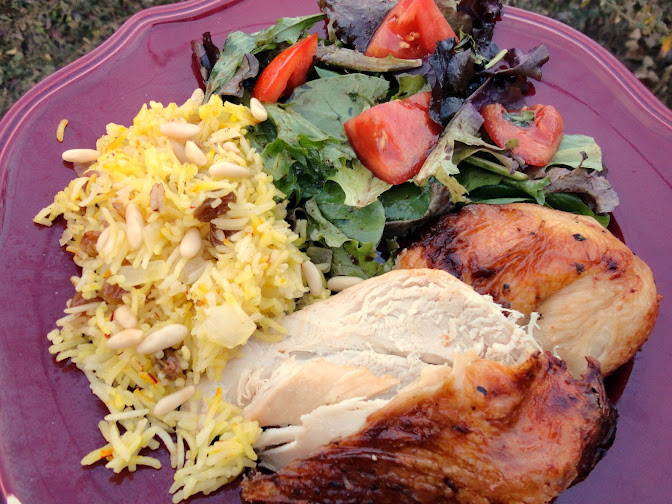 I made the rice to accompany a simple dinner of roasted chicken and a green salad, and it was fabulous.  She says the cardamom, cloves and cinnamon are optional but I highly recommend them.  (I didn’t have the whole spices but added pinches of the ground spices.)  While I’ve never traveled to the Middle East, I felt like I brought a piece of it to my own kitchen as soon as I opened the pot and the fragrant steam wafted up.  The savory rice in combination with the spices & sweet bits of plump golden raisins had me wishing for a complete Middle Eastern meal, and I’ll surely be cooking one up as soon as I have my hands on the cookbook. 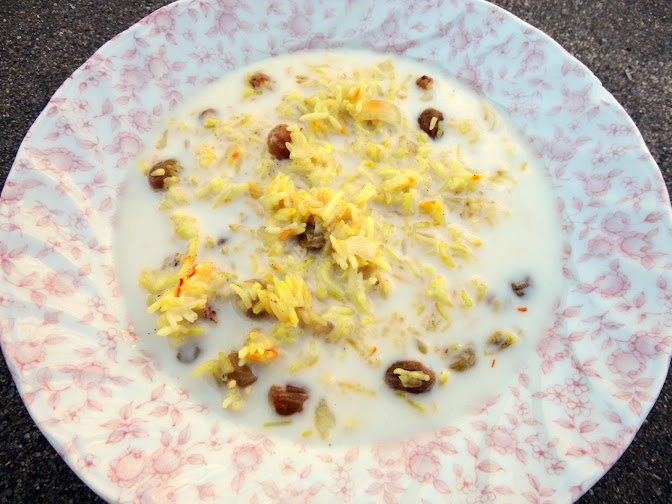 FYI, I had some of the leftovers for breakfast, heated with almond milk as a hot cereal.  It was good, I promise!  And vegan & gluten-free, too. :)

If you are interested in getting your own copy of the cookbook, please click the Amazon or Barnes & Noble links above, and don’t forget to head on over to the launch party headquarters on Faith’s blog! 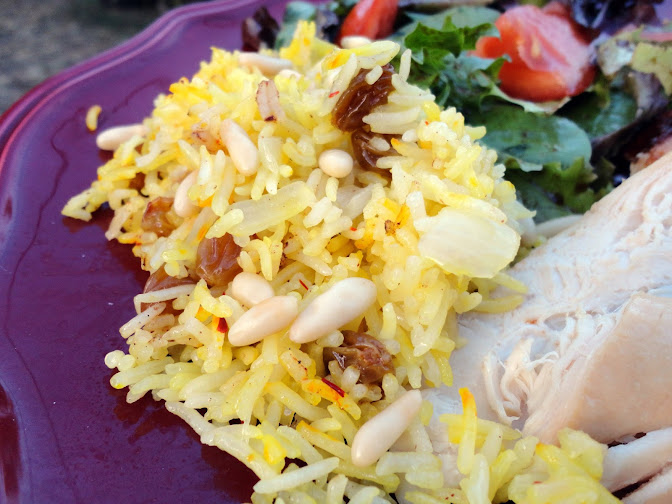 OPTIONAL Add two pods of cardamom, two whole cloves, and one 2-inch (5 cm) piece of cinnamon stick at the same time that you add the rice.

I have a kitchen addiction and love to collect & share recipes. My passion is baking but I love to cook as well. The only thing I don't like to do in the kitchen is wash dishes, but my husband generally does them for me in exchange for his dinner.
View all posts by Veronica »
← Thankful Thursday #90: no words today
Cookie Swap Sign-up Deadline →