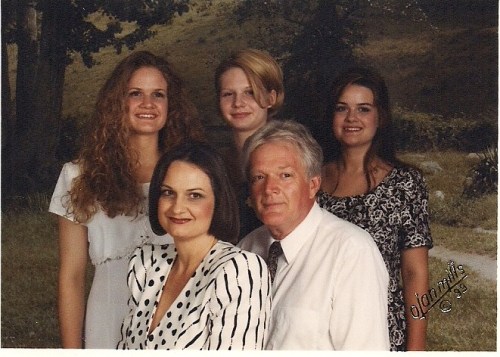 The last Davis family portrait (1999): Danielle, Lacey, me, and Mom and Dad in front

It’s been several weeks since I’ve written a Thankful Thursday post, but it’s about time I came back to my top ten list and gushed about #4.  Admittedly, I ranked my friends as #4 and family as #5 on the official list, and I’m not going to edit it, but I feel that I’m actually more thankful for my family.  We have no say as to what kind of family we are born into, and when we end up with a good one, I think that’s something worth giving thanks for. (Perhaps it’s not a bad idea to find something to be thankful for even if we end up in a bad family, because I’ve noticed that out of something bad often comes something good.)

Just like most families, mine has no shortage of issues.  There have been and still are substance abuse problems, mental illness, verbal and physical fights, bad habits, cruelties administered and/or said in anger.  But overall, I come from a loving family and one of the best things about us is that we do not hold grudges.  We give each other plenty of reasons to hold grudges, but we always forgive each other and have just as much fun at our next family gathering as we did during the last one.  We hurt each other, we drive one another crazy, but we don’t even have to say we’re sorry in order to move on.  We just do.

While Dennis got the raw end of the deal with his crazy in-laws, I got an unexpected blessing.  I married into the “plastic family.”  That’s what I used to call his family (behind their backs, of course-lol) because they were so perfect (like Barbie and Ken with their children in my childhood dream world), I couldn’t see how they could be real.  A real family had deep and major issues, they yelled at each other at the top of their lungs, threw glasses across the room and pulled hair, the Moms threw their daughters through walls and had nervous breakdowns every summer, the daughters got arrested for marijuana possession and suffered from anorexia and binge-eating, the Dads were alcoholics,  and every so often a 300-lb steel desk in the home of a real family would get thrown down the stairs.  Only a “plastic family” could be so gentle, so understanding, so soft-spoken and happy all the time.

Me holding my baby sister, Lacey...with a knife. Do you question the dysfunction?

I thank God for my new plastic family. :)  Without them, I might have never known that a better sort of “real” could exist.  It was in my mother-in-law’s kitchen that I first got the idea to start my Thankful Thursdays feature, while I was overwhelmed with joy to be preparing scalloped potatoes with her (something that will never happen in my mother’s kitchen).  She isn’t as goofy as Dennis, but I think I can safely say that he got his wonderful sense of humor from her, and I’m thankful for that too.  I love spending time with them all because they are not only kind and loving, but fun-loving and the laughter is always plentiful.

Now, that’s another thing my blood family has going for them.  The laughter.  It has seen us through every battle, and is perhaps our strongest bond.  My Dad can find the humor in any situation, and in fact just recently was cracking up, and cracking me up, while telling me about a fight he and Mom had in which she locked him out of the house.  He lifted his foot to kick down the door, but lost his balance and fell backwards, then couldn’t get up.  Mom unlocked the door in response to his yelling, only to laugh uproariously at him before helping him up and letting him back in.  My family isn’t the most functional one on the block, but hey, at least we can laugh about it, forgive each other, and love each other despite ourselves.

Danielle, Lacey, and me

I have a kitchen addiction and love to collect & share recipes. My passion is baking but I love to cook as well. The only thing I don't like to do in the kitchen is wash dishes, but my husband generally does them for me in exchange for his dinner.
View all posts by Veronica »
← Dennis’ Blog Take-Over #3: Using Time Travel to Accomplish New Year’s Resolutions
Cheddar Bacon Dip →