Continuing with my top ten thanksgivings, this one is expanding on #3:

“Here is where I would likely list my children if I had them, but my Jessie girl takes the number three spot because she is my only child.  A dog-hater my entire life, it’s hard to believe how quickly she turned me around with those puppy grunts and her tiny tongue and tiny, dime-sized paws.  Now, it is such a joyful thing to come home to her enthusiastic greeting every day.  The big smile, the wagging tail, the soft panting as I pet her.  I now fully comprehend the saying “dogs are a man’s best friend” because I have experienced firsthand how well-suited they are as human companions.  Their devotion and unconditional love is something that we’d do well to learn from and apply to our own relationships!”

OK, as the title of this blog suggests, I call Jessie my “itty bitty sweetie,” but the truth is, she hasn’t been “itty bitty” for a long time.  She’s a larger mixed-breed dog, and according to the vet, is about 10 lbs. overweight.  Most dog parents are probably aghast that we have overfed our dog to this degree, but I’m kinda proud she’s not any heavier.  It is really hard for me to say no to this face.

There is a song called “God Gave Me You”  by Dave Barnes that Blake Shelton remade after hearing it during a low point in his relationship with his wife, Miranda Lambert.  The chorus goes, “God gave me you for the ups and downs.  God gave me you for the days of doubt.  For when I think I’ve lost my way, there are no words here left to say, it’s true.  God gave me you.”  The song really is meant for a partner, but the music video applies it to other relationships (like mother-daughter), and to other random people God puts in our paths to help us through life (like an EMT at the scene of an accident).  And that’s how I feel about my Bitty.  God gave her to me, to us, because we really, desperately needed her.  And we didn’t even know it!

Jessie was born on June 4, 2004, on our fourth wedding anniversary.  It was a year after we’d been trying to get pregnant, and at that point we weren’t very concerned that it hadn’t happened.  But God saw there would be a need to fill a hole, and helped fill it before we even realized there was going to be one, and Jessie certainly has.

My youngest sister, Lacey, rescued the last surviving puppy from a litter in a bad home, where they were starving the Mom and she had eaten all her other puppies to survive.  Dad wouldn’t let Lacey keep her, and she asked us if we would take her since we had just bought our own home.  Well, I had been an avowed dog-hater my entire life because I thought they were stupid and ugly, dirty and smelly, and worst of all, they barked at everything.  But when I saw Jessie, who was rescued at just three weeks and was so young she couldn’t walk without falling over, I couldn’t say no.  I couldn’t see the last surviving puppy go to the pound and possibly be killed there.  So we took her home, and I’m so glad we did.

When we got her, Jessie was covered in fleas, and when she got sick a week later, we discovered that she also had worms.  We got rid of her fleas and worms and gave her the nourishment she’d been lacking.  (Her pot belly in the above picture is due to the worms, not fat.)  I really became this fur baby’s mother, and would even wake up in the middle of the night if I heard her get up–once falling out of bed in my rush to go to her.  She wasn’t fully housebroken until a month later, and I can’t tell you how many times I had to spot-clean the carpet and shampoo it.

She became the most horrible little hellion, biting, biting, biting, biting, BITING!  She drove me to tears one night because she had been so nice to my sister while she was visiting, and then bit me bloody after Danielle was gone.  She had so much energy, and we simply couldn’t walk/run, or play with her enough to diminish it.  And she would. not. listen.  Jessie chewed on the baseboards, ate our shoes, and our once clean carpets and floors turned into stained messes with dog fur in the corners.

I tell you what, this dog taught me patience, and to let go of my “clean house standards.”  If I ever have a child, whether of my own or adopted, I can tell you right now that I will be a much better mother because I first raised Jessie.   Marker & crayon all over the walls?  I wouldn’t bat an eyelash. You should see what Jessie has done to our front door!  (Dirt and claw marks out the wazoo.)  It will never recover.  And here she is, pretending to be so innocent!

Besides teaching me patience, her energy also whipped us into physical shape because we had to walk her an hour a day, minimum, or suffer the consequences (i.e. come home to a house  that looked like a Tasmanian devil had spun through it a couple dozen times).  Coming home from work became something I looked forward to, because I knew I’d have a puppy spazzing out with glee on the other side of the door as soon as she heard me pull into the driveway.  There was something about her huge smile and heavy panting (something I’ve come to recognize as almost the dog version of laughter or an expression of deep-seated contentedness) that could fix anything and everything.  Just her presence made me feel whole, even through all the tears of frustration as hopes of becoming pregnant were crushed month after month.  In addition to my relationship with God, I really feel her presence helped me come to terms with our infertility a lot easier and faster than if we hadn’t had her as a “child”  already.  (You can read my sob story about our childless-ness here if you care to.)  There is nothing like a dog head resting on your lap to make you feel better. :)

It has taken Jessie almost eight years, but her energy has finally diminished to what I would consider a “normal” level and she has turned into the dog I had hoped we were getting when we took her in.  She is kind, loving, and best of all listens and obeys!  I really  never thought there would be a day when I would call her and she would come to me, even for a treat.  But it’s here.  And Dennis is glad that she no longer pulls his arm out of socket every time we take her on a walk.  She walks at our pace now–a miracle!

Recently, Jessie was attacked by another dog at our vet’s office and her knee cap has been out of place ever since, about a month.  She is on pain medication and glucosamine to rebuild the cartilage and we hope that it will go back in place on it’s own because otherwise she might need a surgery we can’t afford yet.  Seeing her limping around gave me a preview of what it will be like when she is old, and has left me more aware than ever of how short a time we will have with her.  At best, another eight or so years.  I do not look forward to the day when I will have to say good bye, but I do relish every day we have with her.  She is my sunshine and makes me happy when skies are gray.  She not only fills the hole where children would be, but fills in every hole where sadness might lurk.

Jessie does this thing when she can tell I’m mad (well, it’s obvious, I start to get loud).  She comes into the room I’m in and gives me a worried look with her tail wagging cautiously.  Sometimes she’ll come up and put her head underneath my hand to make me pet her instead of yelling.  She knows that her presence will instantly change my mood and it works every time.  She is the magic cure.  It doesn’t matter how mad I am, as soon as I see her expression and that tail, as soon as she puts her head under my hand or reaches out to me with her paw and pushes on my leg, everything bad in my heart flies away in an instant and I apologize and comfort her so she knows I’m not really that mad.  What a gift!

I know I said Dennis completes me a couple weeks ago, but honestly, Jessie does too.  Life wouldn’t be the same without her and I thank God for her.  She is such a blessing. 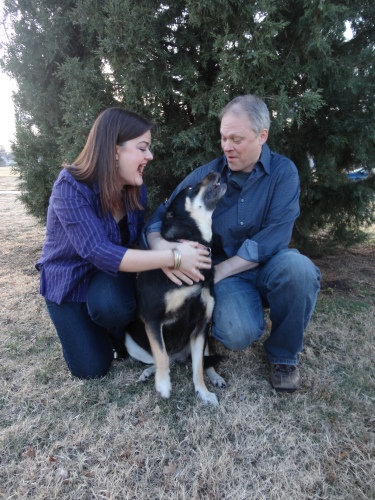 I have a kitchen addiction and love to collect & share recipes. My passion is baking but I love to cook as well. The only thing I don't like to do in the kitchen is wash dishes, but my husband generally does them for me in exchange for his dinner.
View all posts by Veronica »
← White Trash
Christmas Card Outtakes & an announcement →