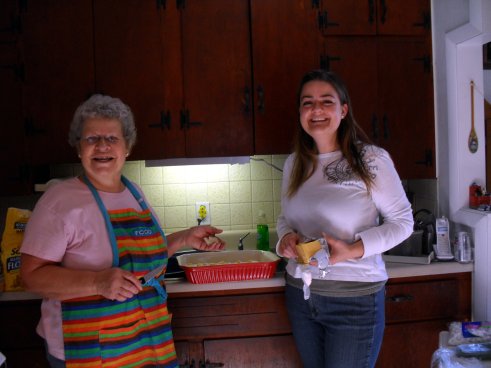 Making scalloped potatoes with my Mother-in-law last Thanksgiving, the activity that inspired this weekly "thanksgivings" feature.

How perfect to end this year-long resolution of finding something to be thankful for every day on Thanksgiving!

It’s hard to believe that I have been doing Thankful Thursdays for a year now.  That I have found something to be thankful for every single day of the year.  I have done this before in a journal, writing something down every day that I’m thankful for, and it’s something that has been very beneficial to me, and something I plan to continue.  I tend to be more of a “glass is half empty” & “negative Nancy” type of person, but slowly this is helping me to become a more positive “silver lining” type of person, which I very much prefer.

Although I plan to feature “Thankful Thursdays” indefinitely, the format will likely be changing, though I’m not certain enough about the change to announce it fully just yet.  I do know that instead of listing what I’m thankful for every week, I think I would like to be able to focus on one thanksgiving per post, because some thanksgivings deserve more than the few sentences I’m limited to when I have seven of them to share.

Well, for the final week of this resolution, I wish I had something profound for you, but since my resolution was to find something to be thankful for every day and report them on my blog, that is how I’m going to finish the year.  And the things I’m thankful for, while they may have been profound at times, aren’t so this week.  Sorry.  :)

Or…maybe they are profound in that I have found gratitude and thankfulness in my heart for all things, including the bad, the smallest advantages, and the mundane.  I have taken the little things for granted so often in my life (clean water, for instance–not everyone has it), but this resolution has helped me to become more aware of how richly God has blessed me.  I guess that is pretty profound. :)

Thursday: The deadline for my cookie swap was today and I was pleased with the results.  There were a total of 66 people that signed up, which exceeded my goal of 50.  Not all could participate, as some were in countries where no one else signed up, but there are still 141 dozen cookies being mailed across the US (and 21 dozen outside the US) because of the swap.  It’s not earth-shattering, but 162 dozen cookies going around the world is a lot of love being shared, and it does help the Postal Service.  Also, I’m thankful to Lindsay and Julie for hosting The Great Blogger Cookie Swap because with their 622 participants, they are responsible for 1,866 dozen cookies being mailed, and that is a huge perk for not only our postal service, but those worldwide!

Friday:  {Warning, TMI is about to follow, but I’m just keepin’ it real.}  I purchased a box of Threelac on Amazon and have been taking it for about two weeks now and it’s amazing how much better I feel.  It is a candida cleansing system (a candida overgrowth can cause many physical problems, including yeast infections, acne, & fatigue–all things I suffer from), something I have been battling ever since I OD’ed on Mexican antibiotics seven years ago (that story is here).  Although I balked at the price, I finally purchased it after reading many reading positive reviews.  I have been yeast-infection free for 6 months, ever since starting on a powerful priobotic, but once I started watching my calories again (I’m down ten pounds, btw!), I was having little skin yeast infection flare-ups (something that always happens when I diet, perhaps because the yeast in my fat cells is being released into my system).  The Threelac has not only nipped those in the bud, but my overall spirits and energy have increased dramatically.  I’m a pretty bubbly person usually, but am prone to days where I feel very low.  Not exactly depressed, but feeling like I don’t want to do anything.  I’ve only been taking Threelac two weeks, but I feel so much more positive about life, and am much more motivated and able to get things accomplished more easily.  It’s very nice to know that something I thought was wrong with me as a person was likely a symptom of a candida overgrowth.  Viva la Threelac!

Saturday:  I have been thankful for Pinterest before, but now for a different reason.  It’s starting to give me my pretty back.  (I’m bringing pretty back, yeah!  Them other boys don’t know how to act, yeah! lol)  Once upon a time, I used to wear a little makeup, fix my hair every day, tried to pick out clothes that flattered me and I was fairly put-together.  After my Dad had a stroke, my looks went down hill, at first because I didn’t have time to care about my appearance because I was too busy worrying & taking care of him, and then it became a habit.  (And now I’m really thinking that the candida in my system had something to do with my indifference as well, since it is dissipating only after I started taking the Threelac.)  I wear baggy t-shirts most days & wear makeup only on special occasions now.  But Pinterest has so many ideas for makeup and hair (style is still beyond me, but there are plenty of those pins too) that it finally motivated me to try to look presentable again.  I’m starting with the basics, actually using the forgotten tube of wrinkle cream at night, shaving & plucking regularly (Dennis is thankful for Pinterest too, lol), putting lotion on after I get out of the shower.  I even managed to paint my nails and wear some eyeliner and mascara and lip color to work once this week!  Hey, that’s kinda huge for me.  I really don’t want to become vain, but it does make me feel happier and more self-confident to make my physical appearance more appealing.  Thanks, Pinterest! :)

Sunday:  I may have had to ask for the day off and use some of my annual leave to do it, but it was just so very nice to have it to spend with my bretheren in Christ on the Lord’s day.  I look forward to a day when my work schedule doesn’t interfere with this!

Monday: That my husband found a decent guy through Craigslist to make songs with.  Dennis is a very musical person (plays guitar, drums, bass, is learning harmonica and the recorder of all things, and has been taking singing lessons for over a year) and has been trying out for bands for a while but the kind of people he was encountering were fairly unsavory.  (One kept hitting on me, for instance, despite knowing I was Dennis’ wife and being married himself.)  He found a winner this time, though, a young, intelligent boxer that loves to write poetry.  I didn’t have to cringe at all while they made music together in the living room.  Glad to know there are still some musicians out there that don’t feel the need to use vulgar language to express themselves.  And that even boxers have a sensitive side.  :)

Tuesday: Wendy’s chili.  Seriously.  It’s so good and so healthy and so cheap.  And it so comforting in these chilly temps.  Oh, Wendy’s chili, how I love you!  (How was that for profound? :) )

Wednesday:  That Dennis was still up when I got home.  Since we’re working opposite shifts right now (my schedule changes weekly), lately I only see him on days off and when he wakes me up in the morning to kiss me good bye.  But that makes me all the more appreciative of the time we do spend together.  Tonight while I dipped pumpkin pie truffles in preparation for the holiday, he cut up some cheese slices for a snack for me and told me about his walk with Jessie and how he was chasing her (she loves to run in the winter–she’s part husky) and fell, hurting his shoulder.  While he was laying there, she ran up to him, and he thought she was going to give him sympathy, but instead she got down into her play position, with her head down and butt in the air, grabbed her leash from him, and took off!  I could not stop laughing at the picture he was painting of Jessie taking advantage of the situation while he was laying in the dirt in pain.  He always can make me laugh! (And don’t worry, they’re both OK.)

In honor of the holiday, I’ll leave you with two cards.  You know how I like cards! 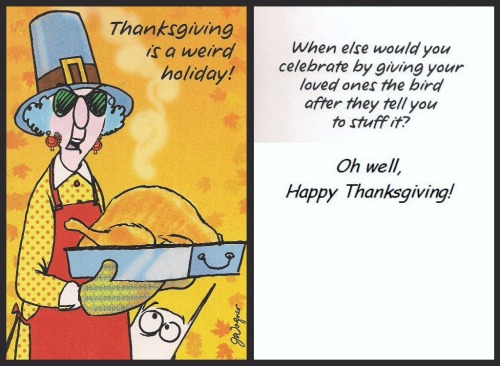 I have a kitchen addiction and love to collect & share recipes. My passion is baking but I love to cook as well. The only thing I don't like to do in the kitchen is wash dishes, but my husband generally does them for me in exchange for his dinner.
View all posts by Veronica »
← Gołąbki {Polish Cabbage Rolls}
Thanksgiving 2011 and No Recipes For You! →