My Week as a Farmer, Part I

Most of my life I’ve fantasized about being a Midwestern pioneer woman in the 1800s, living a hard and fulfilling life on the prairie.  (If they had a more moderate farmer-woman type outfit, I surely would have picked that for the above photo, and forced Dennis into overalls.)  It started with the Little House on the Prairie books when I was in elementary school, and it was kindled again when I started watching the PBS television programs where they send people back in time, to live in the colonial era, as pioneers in Montana, in England during World War II, in a Manor House in Edwardian times, etc., doing the types of things people did in those times, wearing the style of clothing, living in the type of house, for months at a stretch.  It is utterly fascinating, at least to me.    My favorite of the programs is The Frontier House.  (If you’ve never watched or heard of these, I highly recommend renting them from Netflix or your library.  There is a complete list of these programs at the end of this post.)

Last month was the closest I’ve ever come to living out my fantasy.  Our friends, Ben and Ashley, went on their family’s annual camping trip, and they asked us to take care of their birds and garden while they were gone.  Now, I’m not talking parakeets or parrots, I’m talking chickens and ducks.  Being a city girl all of my life, to me, having chickens equates to living in the pioneer days so, of course, I readily agreed before Dennis had a chance to say anything.

Every day, we arrived to the happy sound of chickens squawking and clucking.  If I could define the sound of peace, those squawks and clucks would definitely be in the mix.  It’s the sound I awoke to as a child, during the summer on my Grandparents’ farm.

Our first priority was to feed the birds.  Because if we didn’t, they tried to eat things like my toenail polish, or the back of my ankle, where I cut myself with a razor one morning.

When they started pecking at me, I turned the other cheek and tried to pet them, which really freaked them out and they steered clear of me after that.  But I still tried to pet them.  It’s my instinct with animals, I can’t help it.

After we fed the chickens, we checked around for eggs.  The white duck was reliable, pumping out an egg every day.  We missed the first one, so we found two on the second day.  We got to keep any plunder we found while the Allens were away, including eggs and vegetables. Score!

The chickens are young and only one is laying, but we never found her eggs.  When Ashley and Ben came home, they found seven eggs in the mama duck’s nest!  She had been stealing the chicken’s eggs every day and rolling them into her nest.  Talk about an overactive mothering instinct.  Here she is with her baby.  I guess she didn’t want him to be an only child!

We also washed out their water pans and refilled them, then moved on to the garden.  Jessie came with us to supervise.

“It’s looking kind of dry, Mom.  Time for another soaking!”  OK, sweets, just don’t think about lifting your leg while you’re in there!

While caring for it, we harvested a yellow summer squash and two tomatoes.  I think this was a pepper plant but we left it alone.  I don’t think they were quite ready.

The temps were in the 110s and even made it to 115 while they were gone.  We tried to save this squash plant but couldn’t revive the poor thing.

Once we finished the duties were were commissioned for, we went onto those which we most desired but weren’t required: tending the livestock.  AKA, the canines.   :)  Another friend was feeding them, but we were compelled to stay and extra hour or so to give them some companionship while their humans were away. They greeted us at the fence every day with cheerful barks.

From left to right, Little Anne (aka Big Girl), Beans, Daisy, and Scout.

Little Anne is the eldest and mildest in manner.  Undemanding, unassuming, and grateful for attention.

We love hanging out with the black girls. :)

The dachshund on the ground, looking up at me, is Beans, I believe, but it’s hard to tell her and her mother, Scout, apart.  Meet Beans and/or Scout, up close and personal.

The best part about Scout and/or Beans is watching them run.  Their ears stick out and flap like bat wings!

What I loved best about Scout in particular was her velvety soft, squishy chest.  You would not believe how soft it is.

And then there’s Daisy.  AKA “Diva Daisy,” as I call her.

This pooch demands to be carried at all times.  No compromising.

I’m convinced her destiny of being adopted by a celebrity and toted in a purse around Hollywood was cruelly thwarted when she was adopted by an upstanding, hard working, and practical Midwestern family that would scoff at such a notion as carrying her in an oversized handbag.  Or better yet, baby sling.

“Sigh.  I was never meant for farm life.  It’s so hard to keep a clean manicure when I have to walk on grass every day!”

But there is one canine that they couldn’t leave out with the others.  Because he’s a menace and a danger.  A chicken murderer, and as we would soon discover, a thief to boot.  Meet…ARLISS! (cue scary music) 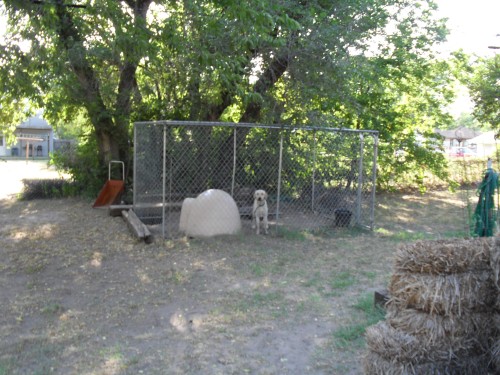 Read “When Arliss Attacks” on Monday!

I have a kitchen addiction and love to collect & share recipes. My passion is baking but I love to cook as well. The only thing I don't like to do in the kitchen is wash dishes, but my husband generally does them for me in exchange for his dinner.
View all posts by Veronica »
← Thankful Thursdays #37: nephew time
My Week as a Farmer, part II: When Arliss Attacks →