Saturday morning, my husband and I dragged ourselves out of bed sporting eye bags heavy enough to weigh down our faces so that we could participate in the Weight Watchers Walk-It 5K at Sedgwick County park.  I was so tired that I probably would have gone back to bed if I hadn’t bought a shirt, but I didn’t pay $17 for a special hot pink Walk-It shirt just to sleep through the 5K.  Funny, the things that can motivate you.

I fueled the upcoming walk with my favorite fruit.  Mango!

We arrived a few minutes late, and I was told my leader, Marsha, wasn’t that far ahead so I made up my mind that we were going to catch up to walk the 5K  with her.  I really wanted to introduce her to my husband because they both have a great sense of humor and I knew they’d get along famously.  Dennis tried to talk me into running, but the woman is in her seventies and I thought if we walked really fast we’d catch up easily.  Boy, was I wrong!

Notice the lack of people?  They’re out of sight in the far distance with Marsha in the lead.  I liked the way the sun was streaming through pockets in the clouds.  The clouds were moving quickly and that heavenly searchlight forged along in a steady stream–quite a sight to behold!

Marsha became my figurative carrot on the end of a stick and we walked like a house afire to try and catch up to her.   (I’m not sure how a house afire walks, but apparently it’s very fast because Grandma Millner always used that expression when observing someone walking quickly.)  Have you ever walked so fast that it felt like it would be easier to just take off running?  Usually when I get to that point, I go ahead and start running, but everyone else was walking except the few radicals that weren’t in our Weight Watchers group, and I didn’t want to attract any more attention than  Dennis’ amazing bedhead (I don’t know how he does it, but he wakes up with the same exact hair sticking up every morning!) and my racoon eyes were drawing already.

I know what you’re thinking, but the wind wasn’t blowing. 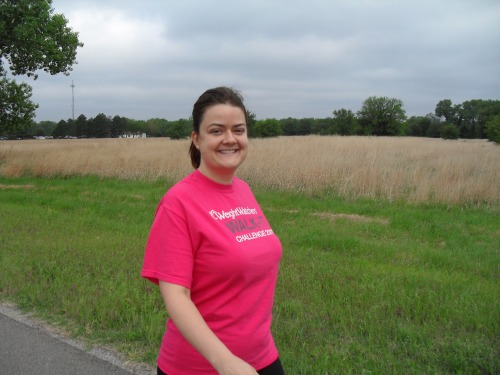 I know what you’re thinking, but I’m not related to a basset hound.  Doesn’t the background look just like you imagine the Kansas prairie looked before the first settlers?

We passed people.  And passed more people.  Some I recognized from my meetings and I asked each group if they’d seen Marsha and every one of them laughed and wished me luck catching up.  Apparently Marsha has a reputation for being a very fast walker, so we kept our speed up and our eyes on the horizon, hoping for a glimpse of her, but I never even caught sight of my carrot.  But having that carrot definitely made me work harder to finish the 5K than I normally would have.

I have a unique ability to appear as if I’m moving at the speed of molasses in photos, even when I’m running!  Despite the posed look of this photo, I promise I was bookin’.  I had Dennis run way ahead to take a pic so that I wouldn’t have to slow down.  I had a carrot to catch! 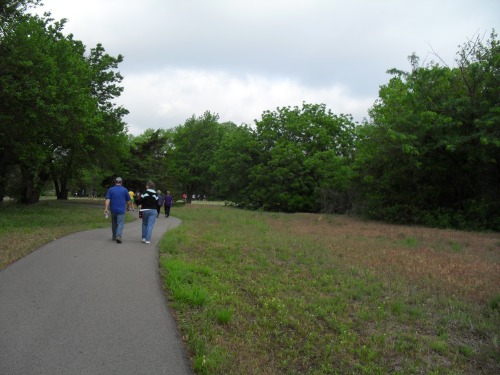 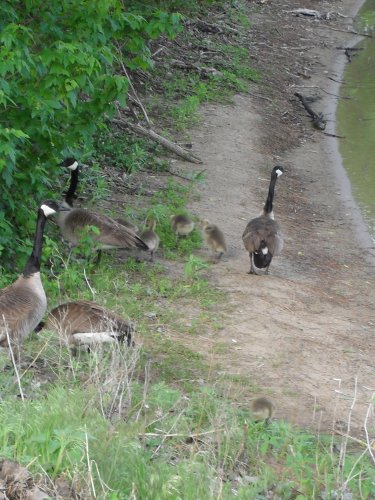 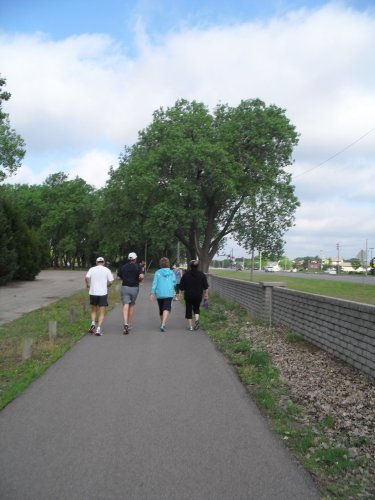 How dare these runners buck the system and pass us during a WALKING challenge?! The nerve.

By the time we finished, I was sore!  Dennis grabbed the camera while I was stretching, so I raised my arm for a victory pose.  (I think I may have invented a new yoga stance!  Or is this one taken already?)  I guess my eye bags were too heavy for me to keep my lids open at this point.

Dennis wanted to show off his flexibility as well. You never know what sort of pictures you’ll have after he gets a hold of the  camera! 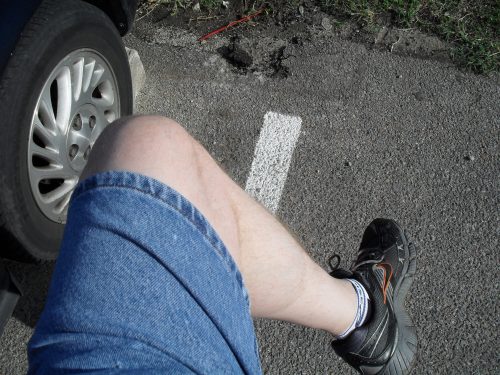 Dennis had to see how he fared on the Möbius strip in the park before we left. 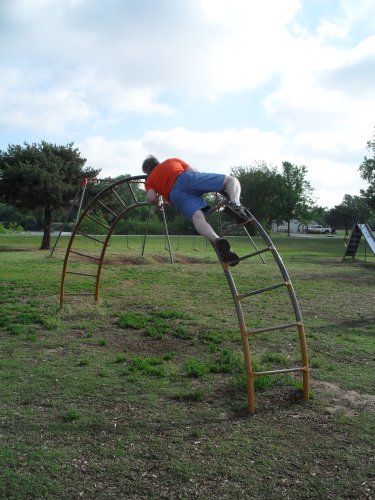 LOL, I adore that goof!  Crazy bedhead and all.

Dennis awarded his hard work and support of me (thank you, honey! You rock.) with his favorite fruit, a raspberry bismarck. :)

And I went for a yummy fat-free vanilla cappucino, probably my favorite coffee drink as long as it’s not from Starbucks. Sue me, but I prefer Dillons or Quik Trip.

Although anti-climactic, since I never caught up to Marsha, I thoroughly enjoyed power walking a 5K and the sore feeling that still resides in my hips and thighs reminds me of the only part of working out I enjoy–that lovely sore and spent feeling afterward.  I really need to get my cardio back on–it’s been hibernating for several months now and I can tell my fitness level has suffered!  I know that saying “some day” means you’ll never do it, but….some day. :)

Pressing related questions (pick one, answer all, or ignore–up to you!): Have you ever heard or used the expression “like a house afire?”  What motivates you to push yourself during a workout?  What’s your favorite fruit?  Any fellow Starbucks haters out there?

I have a kitchen addiction and love to collect & share recipes. My passion is baking but I love to cook as well. The only thing I don't like to do in the kitchen is wash dishes, but my husband generally does them for me in exchange for his dinner.
View all posts by Veronica »
← Wacky Cake {Vegan}
Vegan Dark Chocolate Cake Pops →