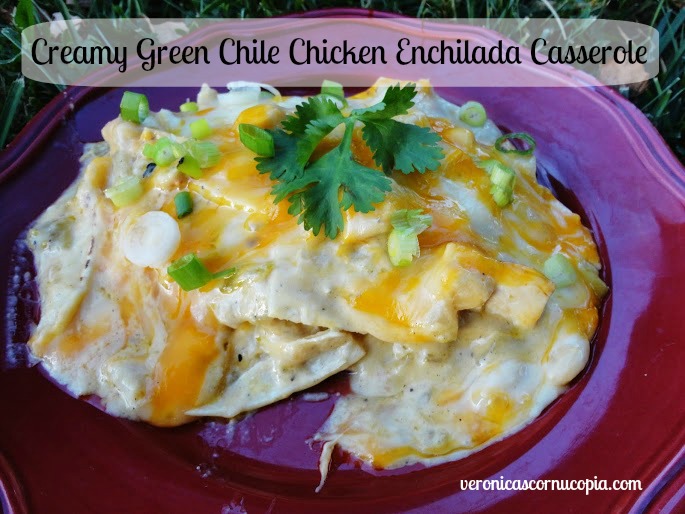 Wow, that title is a mouthful!  Sometimes it’s hard to stick to a two or three-word recipe name when there’s so much goodness going on with it.  I had to tell you this was creamy, because that’s one of the best features of this dish.  I had to tell you it features green chiles, both straight up and in salsa verde, because the flavor profile this creates with the creamy & cheesy ingredients is rockin’.  And it’s a chicken enchilada casserole so I couldn’t exclude those words.  For your sake, I didn’t mention the beans in the title, though I was tempted to call this “Creamy Green Chile Chicken & White Bean Enchilada Casserole.”  You gotta draw the line somewhere, am I right? 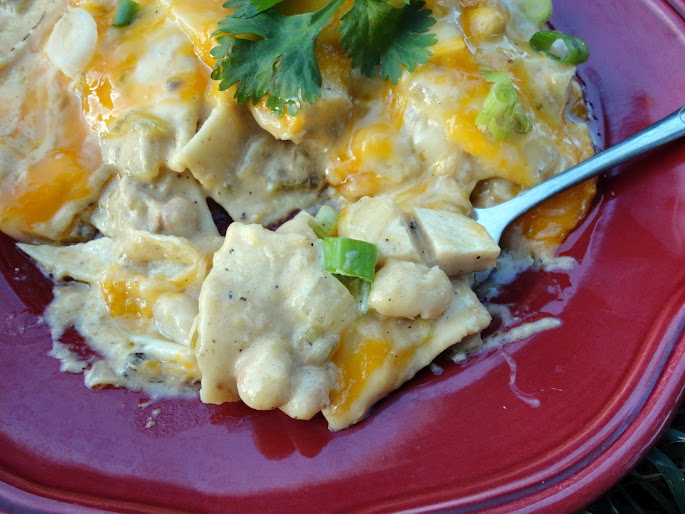 Pretty much everything I eat right now seems like the best thing I’ve ever eaten in my life.  So maybe it’s not true that this is the best thing I’ve ever eaten in my life, but it sure felt that way while I was eating it.  It’s filling (yay for protein, fat and fiber! hehe), which made me so sad because I wanted to eat the whole casserole, in one sitting, all by myself.  It seriously rocked my world.  I was so excited to serve it to my husband (we hardly ever eat dinner together, and on this occasion I actually ate before him, which is unusual since he usually gets off work before me) and I tried not to lean over his shoulder to gauge his reaction.  But I kinda did.  He never gets excited about food like I do, but he said it was “really good” and ate a huge plateful rather quickly, then went back for more.  I’d say that’s a big two thumbs up from the Den man! 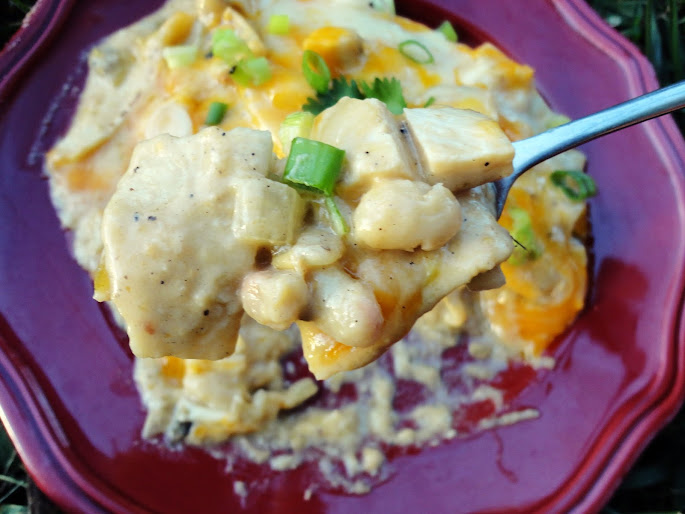 There’s pepper in this dish, but the black flecks come mainly from the roasted salsa verde, linked to in the recipe.

I based the recipe off of my favorite Creamy Chicken Enchiladas, and maybe it’s just that I haven’t had them in over a year (so many recipes, so little time), but I do believe this green casserole version is even better than the original enchiladas.  All I know is it’s good, and I would definitely make it for company! 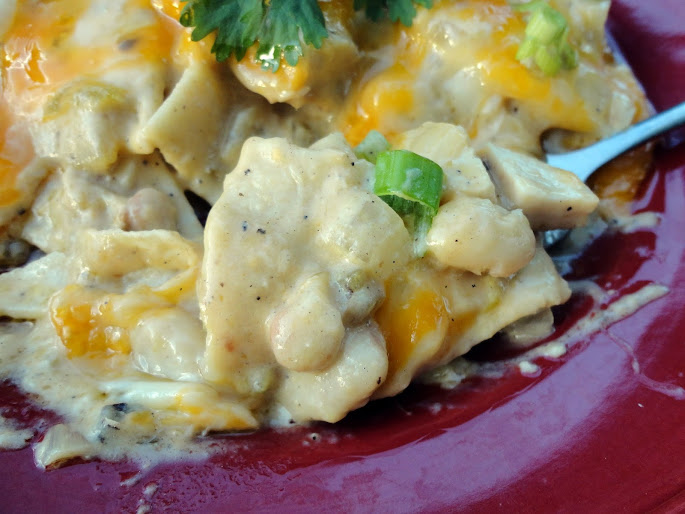 Salt your chicken breasts and cook them in a skillet or grill (I use my George Foreman). Allow to cool enough that they won’t burn your hands, then chop them up; set aside.

While the chicken is cooking, heat a skillet over medium-high heat and chop up your onion. Melt the butter in the heated skillet and add the onions, sautéing until softened. Stir in the green chiles and salsa verde and cook for 3-5 more minutes to cook off some of the liquid. Add the chicken, white beans, sour cream, cream of chicken soup, 2 cups of the cheese (reserve the rest for the top), garlic powder, salt, and pepper.  Stir together until well blended and cheese is melted.

Spread a small amount of the chicken mixture over the bottom of your prepared pan, then put a layer of the quartered tortillas over it, slightly overlapping. Spread half of the remaining chicken mixture over the tortillas, then another layer of tortillas, and finish with the remaining chicken mixture. Sprinkle the reserved cheese over the top, then cover with foil that has been sprayed with cooking spray to keep the cheese from sticking (or use the nonstick foil). Bake for 15 minutes, remove foil, and bake another 5 minutes or until bubbling around the edges. Let sit 10 minutes before cutting.

Veronica’s notes: I highly recommend shredding your own cheese, as the preshredded kind doesn’t melt as well and IMHO, does not taste as good. You will need ¾ of an 8 ounce block of both cheddar and Monterrey Jack for this recipe (every 8 oz block makes 2 cups of shredded cheese). The tortillas are super simple to cut into quarters if you layer five tortillas and use a pizza cutter on them, or a chef’s knife. Also, this would make an excellent meatless meal if you just replace the chicken with another 2-3 cans of white beans.

A Veronica’s Cornucopia original, with help for transforming it into a casserole from 4 Little Fergusons

I have a kitchen addiction and love to collect & share recipes. My passion is baking but I love to cook as well. The only thing I don't like to do in the kitchen is wash dishes, but my husband generally does them for me in exchange for his dinner.
View all posts by Veronica »
← Joshua’s Nursery
28 weeks: I’m hotter than all y’all ;) →