Last week when I shared the photos of Danielle and I making soap together, I left a lot of photos out because I knew I wanted to use them for a Thankful Thursday.  Near the end of our soap making adventure, our youngest sister, Lacey (actually her name is Franciska but we’ve always called her Lacey, which is short for her middle name-Larissa. My Mom may be as crazy as a rabid spider monkey, but I think she did a pretty rockin’ job with all our names!*), joined us unexpectedly and it was so nice to have some sister time!  We all have such busy lives that we rarely get together for anything, and it was almost a miracle for us all to be in the same place at the same time without it being someone’s birthday or a barbecue.

*For the record, here are the beautiful names my mother came up with for us: Veronica Euvena (pronounced U-veena), Danielle Nicolette, and Franciska Larissa (pronounced Francheska-I don’t know why she wanted to spell it with an I instead of an E but it was probably the rabid spider monkey coming out).  Unfortunately our last name was rather plain by comparison: Davis.  I married a Miller, which I consider a step sideways, and Lacey married a Rickett, which I can’t decide if that’s better or worse.  It’s more interesting than Davis, but rickets is a disease poor people get from malnutrition! I think we are cursed in the last name department, but Mom really made up for it with our first and middle names, IMHO.

After squealing with delight and giving Lacey hugs, I asked her what brought her to Danielle’s shop.  She showed me her boots and told me she was trying to learn to walk in heels, so she had walked from Dad’s house, which is only like 6 blocks away, to break them in.  We had quite a laugh imagining her strutting down Douglas in her boots, jokingly asking if she was considering a new profession. 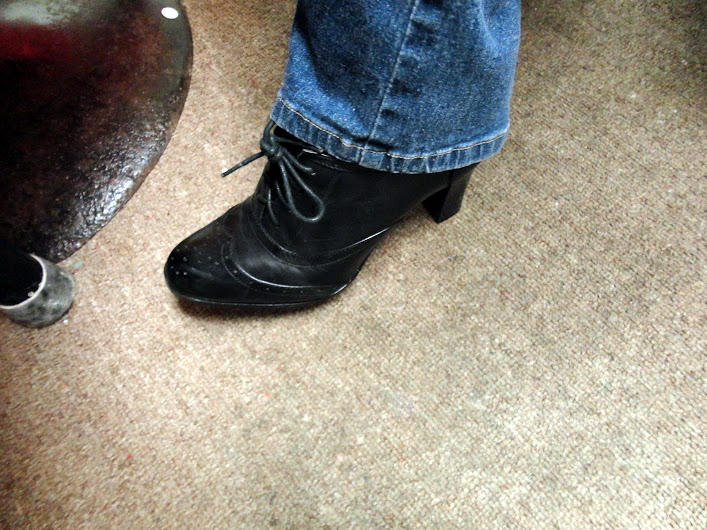 When we were done making soap, we tried to get a picture together but alas, it wasn’t meant to be.  Maybe there are other sisters out there that can all smile perfectly at the same time while focusing on the camera, but we aren’t them. 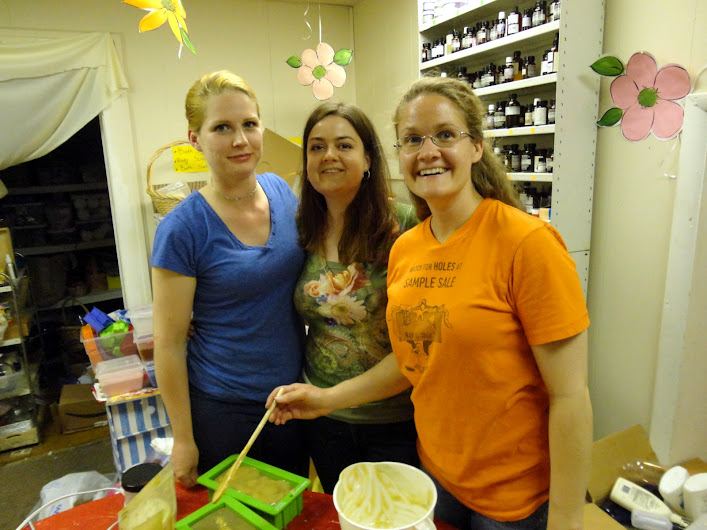 Well, Lacey’s a pro, but I wasn’t quite ready and Danielle is giving her ornery/innocent expression that suggests she might have peed in the soap.  “Who me?  Oh, no I would neeeever pee in the soap. *hehehe*” 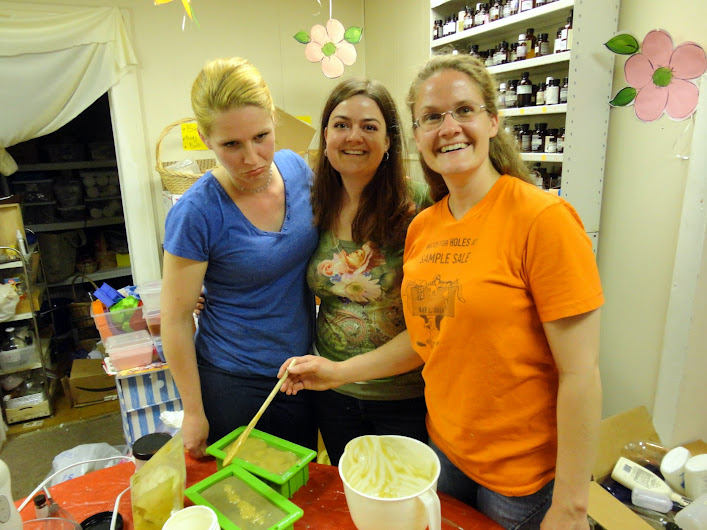 Dennis suggested we all try to look sad so that we’ll at least all be wearing the same expression at the same time.  Danielle and I ignored him as usual, but Lacey took his suggestion to heart.  I’m also wondering, if Danielle and I are both looking at Dennis, why her eyes are going off in another direction?  It’s the RSMG (rabid spider monkey gene)! 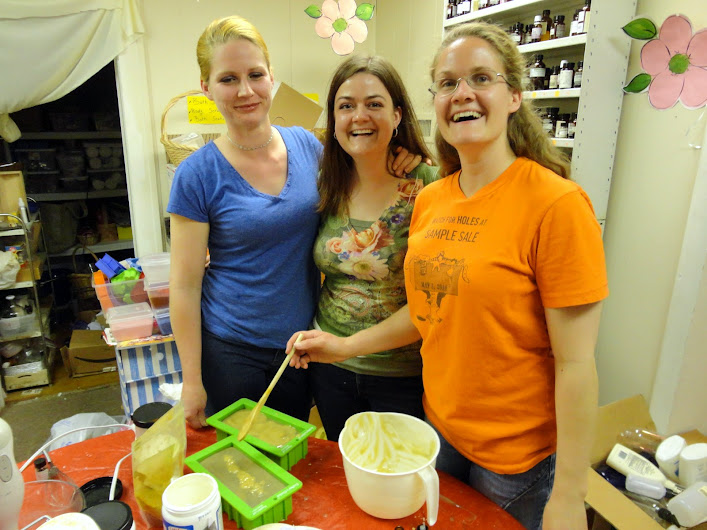 I’m going to go ahead and tell you that this is as good as it gets.  I’m just wondering what are the odds that both Danielle and I decided to tuck our upper lips way under so they look nonexistent? 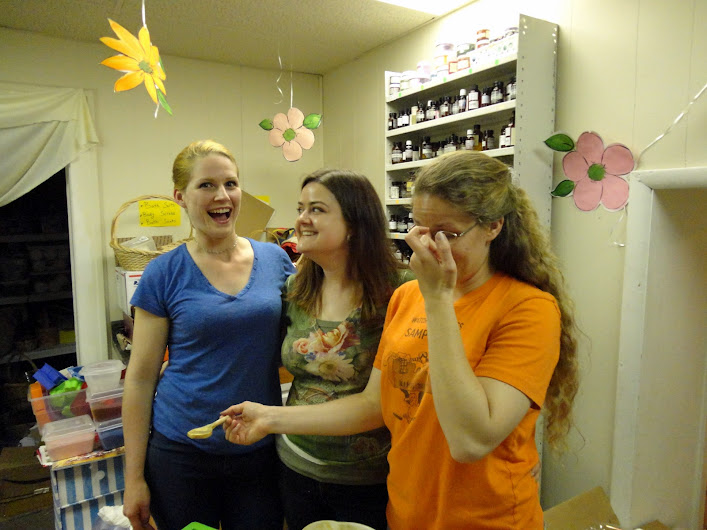 Unfortunately Danielle missed Lacey’s demonstration of an enthusiastic smile.  Later photographs taken into consideration, I’m not sure I really benefited either, despite witnessing its full glory. 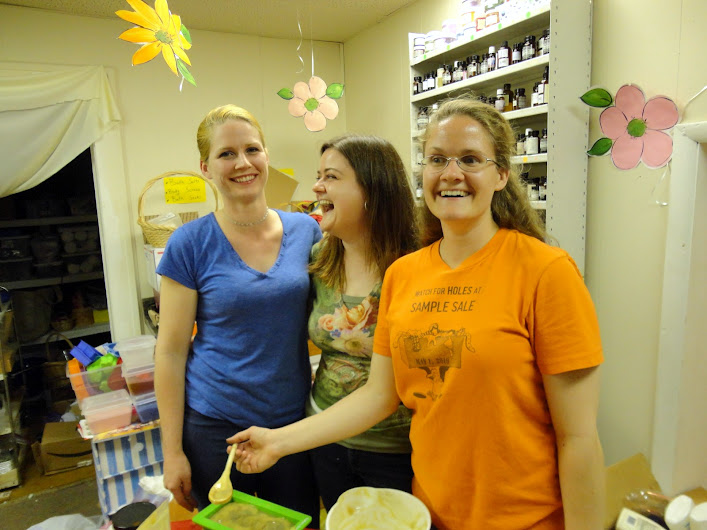 This is my favorite one of Lacey because her smile is big, relaxed, and natural because she was laughing at herself.  The RSMG has fully kicked in for Danielle and she’s glazing over, laughing at something happening in her head. 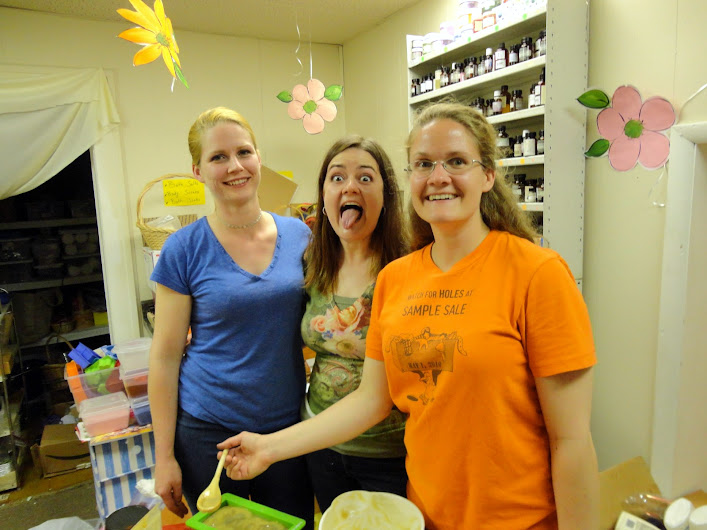 I totally ruined this one! Arg!  Well, except Danielle is staring off in the corner again. Danielle, get a hold of yourself! lol 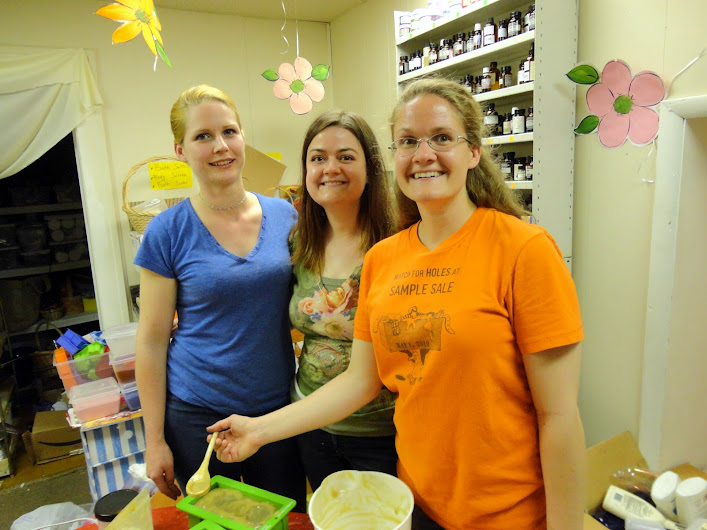 It’s not glorious, but we’re all smiling.  Danielle!  What are you looking at? 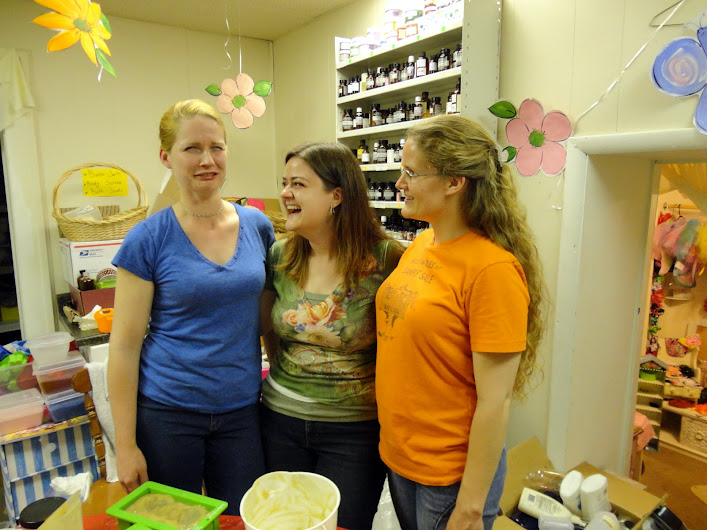 We tried to do the sad thing together, but Lacey was so funny while pretending to cry that we could only laugh at her!  Actually, Danielle looks kind of confused.  Maybe she’s still thinking about what’s going on in the corner. 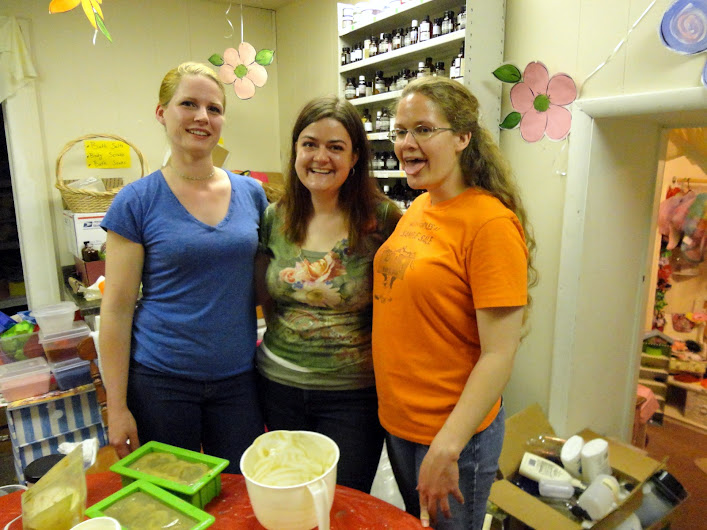 Oh my goodness.  Danielle was trying to look sad a little belatedly, but she got it so. wrong.  Danielle, this is the look of a rabid spider monkey that’s been hit by a truck! Roadkill spider monkey! lol 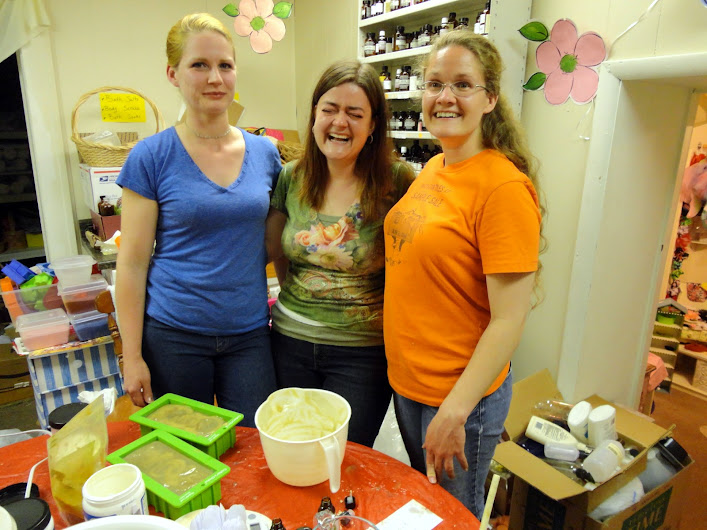 Aaaaad I lost it.  Lacey looks pained, doesn’t she? “If only they would have paid attention to my enthusiastic smile early on!” she’s lamenting.  Danielle is still watching something in the corner of the room that no one else can see. 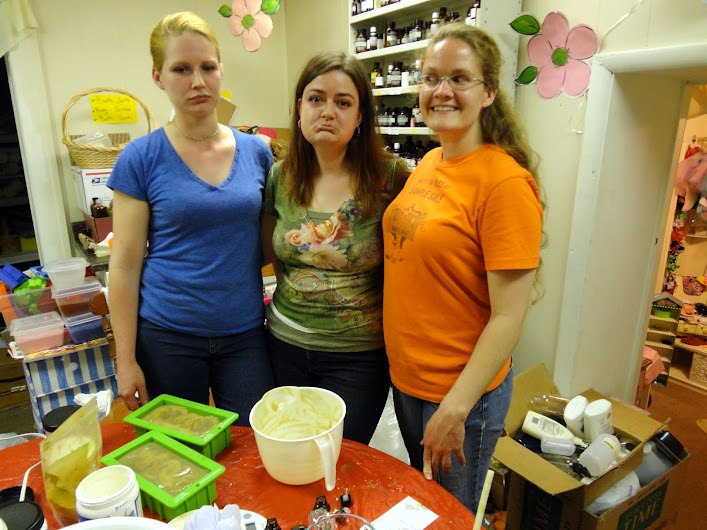 Danielle, you FAIL the sad look test!  I think she’s still thinking about that fresh soap that she may or may not have peed in. 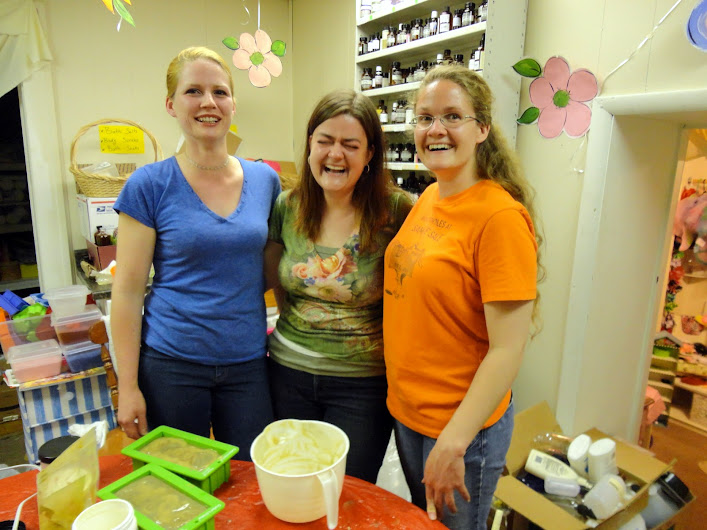 Thank God for my sisters, who always make me laugh.  They can make me insane with anger (bossy older sisters always think they know best, and stubborn younger sisters never listen), but for the most part, we get along well and can turn even a simple photograph into cause for hilarity.  The bring me such joy in even the simple things.

And just wondering…what happened to these days when we aced every shot?

Perhaps the blame doesn’t lie with the photo subjects…but the photographer? 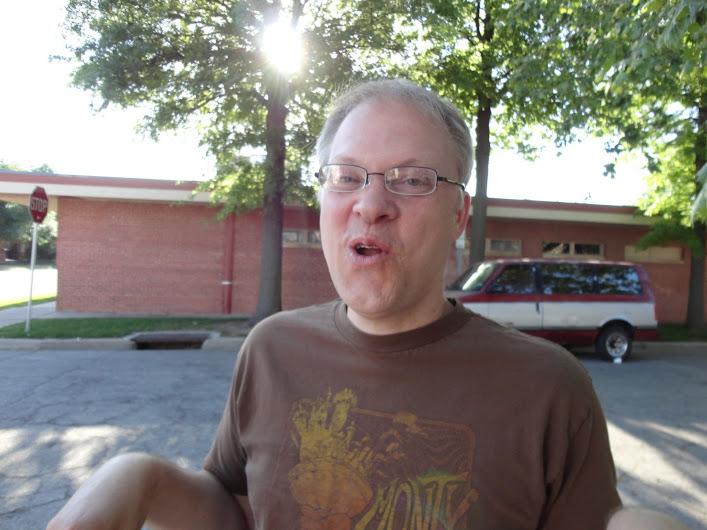 Hmmm, there could be something to that theory.

I have a kitchen addiction and love to collect & share recipes. My passion is baking but I love to cook as well. The only thing I don't like to do in the kitchen is wash dishes, but my husband generally does them for me in exchange for his dinner.
View all posts by Veronica »
← Avocado Chocolate Pudding
The Truth →