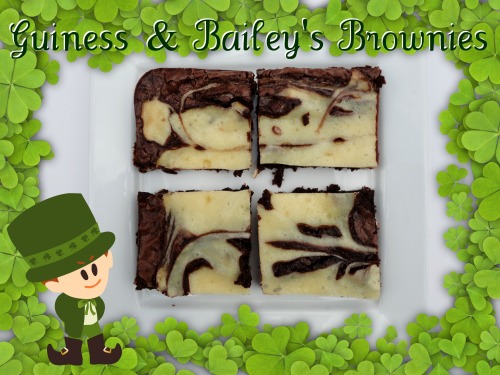 In the name of culinary exploration, I bought a single bottle of Guiness to make Wednesday’s cupcakes, knowing I could never use an entire 6-pack.  Unfortunately, the bottle was pretty ginormous so I still have more than half of it left.  I also have quite a bit of Bailey’s left, and since I can’t give this stuff to people I know who drink because they either don’t drink anything but the occasional wine or have drinking problems, I’m either going to have to toss it or keep baking up a storm with it.  And you guys know I can’t waste anything, right?

Hence, these brownies.  These crazy, rich, gooey, decadent brownies.  I went with my Kahlua brownies recipe, switching out the Kahlua for Guiness, and then went a little crazy with the mix-ins, adding butterscotch chips, white chocolate chips, and walnuts.  Then I glanced the cream cheese in my fridge and got excited, thinking of my Brownie Cakes recipe and using it as a springboard to create a Bailey’s Irish Cream cheese swirl.

I liked these a lot, despite the Guiness.  I’ve discovered from reading Guiness & chocolate recipe reviews on blogs that I may be the only blogger alive not in the “Yay, Guiness and chocolate are the best combo evarrrr!” camp, but at least the flavor was not overpowering here, thanks to the sweet chips and cream cheese swirl.  There is a slight yeasty flavor from the Guiness, which is interesting but not off-putting.  For most people, that would translate to, “Yaaaaaaay, Guiness brownies are the best thing EVARRRR!!!!”

The only bad thing about these brownies (unless you want to count the calories, but who counts dessert calories??), is that they used up so little of this leftover alcohol.  I’m giving up on the Guiness, but as for the Irish cream…Bailey’s Banana Bread anyone?

Preheat oven to 350 degrees. Grease the bottom only of a 9×13” baking pan and set aside.

Combine the first four ingredients in a large mixing bowl and whisk until shiny and smooth, about a minute. Add optional mix-ins and stir until well combined. Spread into prepared pan; set aside.

Beat the cream cheese and sugar in a small mixing bowl until creamy, then beat in the egg and Bailey’s Irish Cream. Drop batter by spoonfuls on top of the brownie batter and swirl through with a knife.

Bake for 40 minutes, or until the cheesecake is golden on top and the brownies are puffed in the middle but firmer at the edges. Allow to cool completely before cutting.

OK, so this blog was too long to include this story before the recipe, but I wanted to put it at the end for those whose patience is still holding.

In high school drama class, we were doing a project where we were creating a spoof episode of the X-Files.  I remember nothing about the episode we came up with, except that some genius decided to cast me as an evil leprechaun.  (Speaking of evil leprechauns, doesn’t that one in my first picture look a little sadistic?)  We were actually filming it, just like a real TV show.

I showed up on filming day dressed head to toe in bright green.  I had no idea what I was going to wear for the role, but my mother happened to have a pair of bright green corduroy pants (oh, the glorious high fashion of the 90s!) stashed away in her closet.  She was a tiny woman and even at 115 pounds, I really had to stuff myself into those things and could hardly breathe all day.  I paired it with a matching shirt and called it golden (or emerald, if you will).

For my scene, we were filming in the hall and I was told to run off laughing after delivering my line.  It wasn’t until the camera started rolling that I thought to wonder how long I should run while laughing.  Convinced I should fight my urge to do it only a few seconds, thinking it was just my shyness trying to get the better of me, I tore off down the hall, squealing insanely with evil leprechaun laughter, throwing my hands up over my head and swinging them wildly back and forth as I ran…all the way down the hall.

I passed about five classrooms, squealing with high-pitched insane laughter at the top of my lungs.

When I turned back around, hoping I’d laughed long enough, there were curious heads leaning out of every single closed door I had passed, and in the far distance, I could see my classmates rolling with laughter while my drama teacher looked like he wished he could crawl under a rug.

I could have died.  The walk back to join my drama group was the longest walk of my life.  Every classroom stared at me as I passed, surely wondering who the crazy girl dressed in green was and if there was anything beyond my insanity that spurred the laughter that disrupted their class.

And of course, after that day, I was known far and wide as “the evil leprechaun.”

I have a kitchen addiction and love to collect & share recipes. My passion is baking but I love to cook as well. The only thing I don't like to do in the kitchen is wash dishes, but my husband generally does them for me in exchange for his dinner.
View all posts by Veronica »
← Thankful Thursdays #67: ding dong, the glasses are dead!
Baba Ghanoush Two Ways: Classic & Tahini-Free →