Welcome to day two of my Cake for Dummies series!  Let’s talk levelling.

So why, you may ask, do I need to slice the perfectly delicious top off my cakes? It’s simple: flat cakes stack nicely and will give you a better finished look than if you stack two domed cakes. Plus, slicing off the top enables you to chow down practice quality control on your cakes, so you will know if it is celebration worthy without leaving a tell-tale hunk missing from the finished cake. 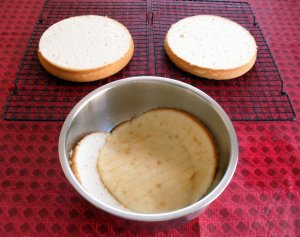 Cakes are stacked with the bottom layer being top-side-up and the top layer being top-side-down, like a cake sandwich.  Depending on how high the mounds of your domes are, you might have only a very small part of each cake meeting in the middle if you stack them without levelling, leaving a gap around the edges of your cake that will have to be filled in with frosting.  If you go that route, you’ll have an unstable cake and will probably have frosting oozing out between your layers, which isn’t a great look.  So unless you use Magi-cake strips or similar on your pans and have fairly flat cakes to begin with, I’d really suggest levelling them before stacking and frosting the cake.

Here’s an example of what you don’t want.  Although the top cake isn’t top-side-down, which would have made the gap ridiculous, you can see that there is still a big gap between the sides, which makes for too much frosting around the edges and not enough in the middle.

Compare that to this cake I made, which I leveled first.  It is perfectly flat after stacking and I used the same amount of frosting over the whole surface of the bottom cake. 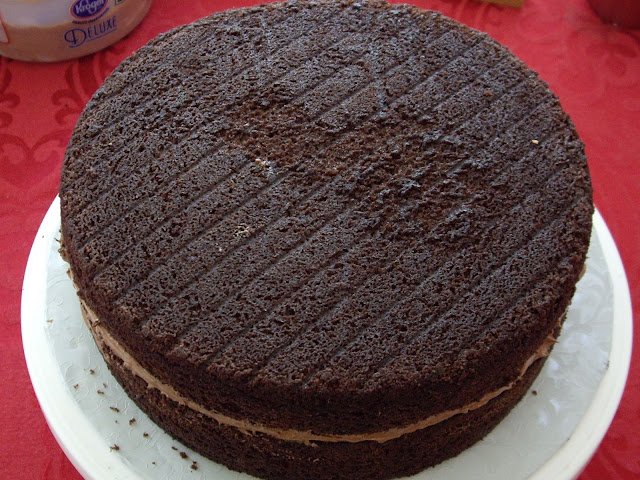 This shows the inside after cutting.  Although the photo is a hot mess because some very hungry people attacked it with a knife and I took it in bad lighting, the even layers are still more attractive to cut into than the mounded cake in the first photo. 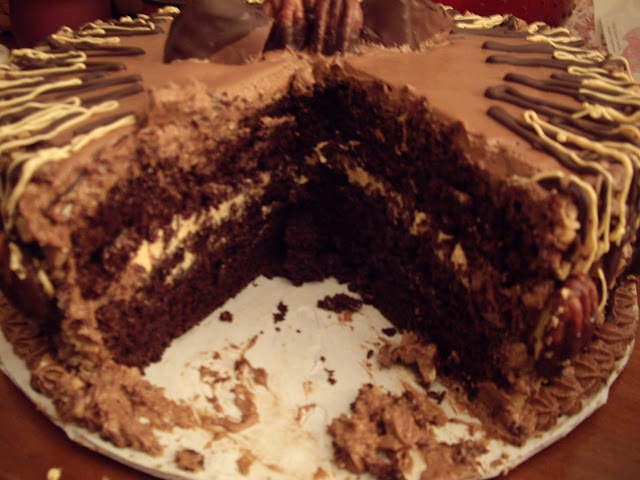 In the photo: Chocolate Ridiculous Cake

All that to preface the video, in which I’ll demonstrate how I level a cake.  This tutorial on levelling is the shortest video in the series, so it feels a little funny to give it its own blog and it’s own separate video, but the next is long enough without this one being included, so today is a short and sweet video tutorial day.  Enjoy!

I’m using the Large Wilton Cake Leveller in the video.  This is the cheaper version I mention.

P.S. Thank you to everyone who has me in a reader for bearing with me overloading your readers while I updated my 2009 recipes to put the pictures back after they disappeared! As of today, I’m done updating all those old posts (as far as I can tell)!  If you ever find any recipes or posts missing pictures, please let me know. Thanks again!

I have a kitchen addiction and love to collect & share recipes. My passion is baking but I love to cook as well. The only thing I don't like to do in the kitchen is wash dishes, but my husband generally does them for me in exchange for his dinner.
View all posts by Veronica »
← Cake for Dummies: How to Create an Attractive Layer Cake
Cake for Dummies, part 3: frosting and stacking →