Before I get to today’s post, I want to do a quick update for The Postcard Project.  People have started signing up but I want to encourage everyone that is participating to add your name to the list. Many have told me they are sending mail but aren’t on the list yet.  The list is where I’ll be drawing from for the prizes!  Oh, did I forget to mention there are prizes at stake?  My blue ribbon chocolate chip cookies, to be exact!  I’ll be drawing at random from those signed up each Friday this month (winners will be announced each Saturday), then at the end of the month I’ll award a batch to the person who sent the most mail.  So you have a chance to win whether you’re sending 1 letter or 100!  Every letter makes a difference, especially to the person who receives it.  This project will never take over the focus of my blog, but I do intend for it to be ongoing.  I’ve already started on my own goal and it has been so fun writing to people I rarely correspond with.  I can’t wait to share some of the funny cards I got with you guys.  In the meantime, I give you Cranberry Chicken! :)

Pinterest.  Have you heard of it?  Bloggers have been annoying me with their urgings to get on there for months and I fought it hard, not wanting yet another reason for internet addiction in my life.  Even when I was getting 15,000 views a day on my blog (which is not the norm, I can tell you) because of people “pinning” my cupcake bites on Pinterest, I did not sign up.  I was steadfast and strong in my resolve.  But then a personal friend sent me an invitation to join, telling me I “had to do it” and I guess she was right because I did it, despite myself.  It was almost like some evil force in the universe overcame me and made me forget all my reasons for not wanting to.  An evil force named Tracy.  Oh yeah, girlfriend, I just called you out! :)

So, what does this have to do with cranberry chicken, you might ask?  Well, if it weren’t for Pinterest, I would never have made this cranberry chicken!  I bookmarked it ages ago and forgot about it because I never go back to look at things I’ve bookmarked.  But when I signed up with Pinterest, I decided to use it instead of bookmarking things and I transferred all my favorites into boards on Pinterest.  This chicken was one of the first things I transferred and I could barely remember marking it.  And I made it the same week!

I don’t know if this is how everyone uses Pinterest, but I “pin” things, mostly recipes, that I want to try in the future and it is so much more useful to me than bookmarks.  I can categorize things and then I see a visual picture to remind me of what I wanted to do and when I click the picture, it brings me to the web page I got it from.  It’s very handy, but it is also addicting because I can spend an hour looking at everyone else’s pins and repinning them to my own boards for future reference.  Handy and evil!

OK, so let’s talk chicken.  This recipe is another super-simple one with just a few ingredients and fantastic flavor.  It doesn’t have an overwhelming cranberry flavor, in fact the only cranberry taste comes from the whole cranberries themselves because the sauce has onion and Catalina dressing in it to make a flavor all of its own.  It’s a little sweet, a little tangy, and a lot delicious.  Dennis and I both give it two thumbs up! 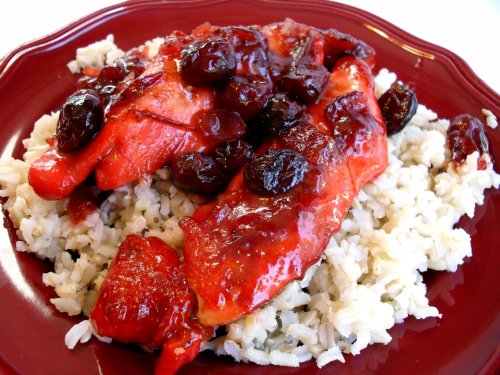 Preheat oven to 350. Spray a large casserole dish with oil and set aside.

In a medium bowl, combine the dressing, soup mix, and cranberry sauce and whisk together until blended. Pour enough of the sauce in the dish to make a thin layer, then place the chicken in a single layer on top. Pour the remaining sauce over the top, making sure all the chicken is well-coated. Bake, uncovered, for 1- 1 1/2 hours.  Serve over rice, ladling extra sauce over the top.

I have a kitchen addiction and love to collect & share recipes. My passion is baking but I love to cook as well. The only thing I don't like to do in the kitchen is wash dishes, but my husband generally does them for me in exchange for his dinner.
View all posts by Veronica »
← Announcing: THE POSTCARD PROJECT
Teaser Tuesday →